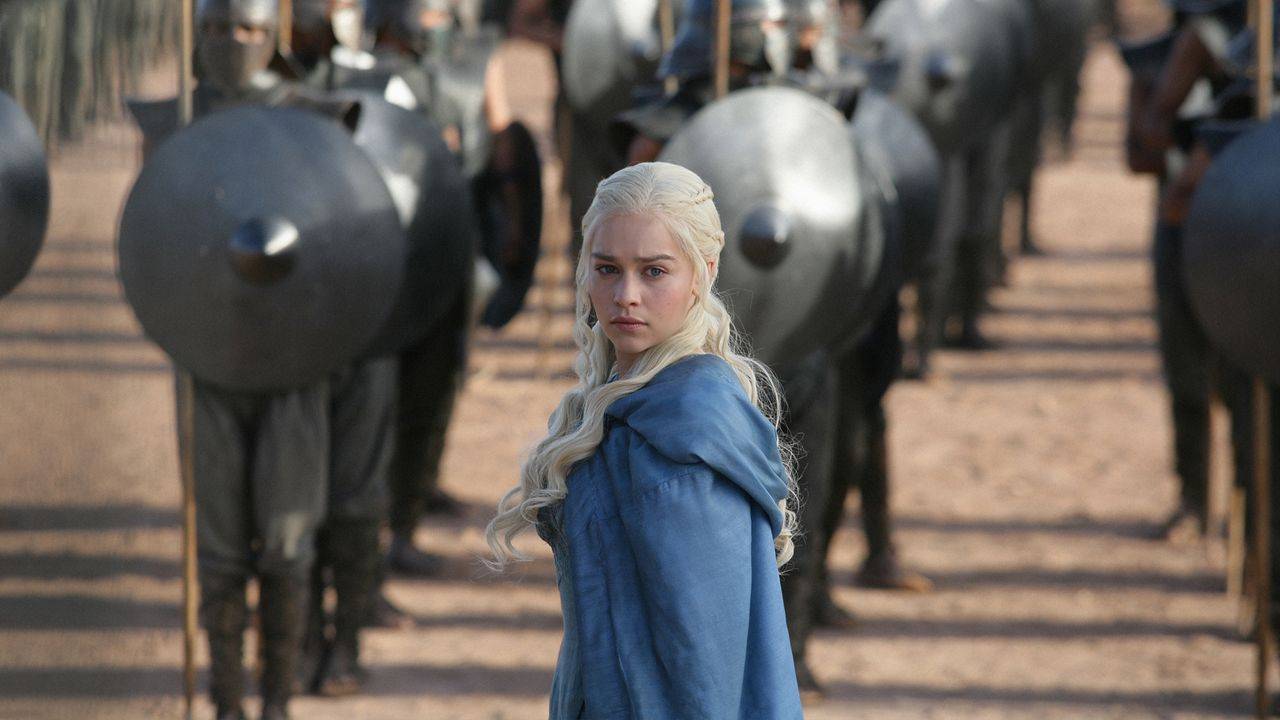 And Now His Watch Is Ended

Jaime Lannister rides with his severed hand hanging from his neck as the Bolton men heckle him. Weak and dehydrated, he falls from his horse onto the muddy ground. His pleas for water are answered with horse urine. Infuriated, he seizes one of the men's swords, but is further humiliated when he tries to fight with his left hand. Although restrained, Brienne attempts to aid Jaime but her efforts prove futile and Jaime is quickly beaten. Locke threatens to take his other hand if he acts up again.

Tyrion Lannister visits Varys, hoping to prove that his sister was behind the attempt on his life at Blackwater. Varys, who has no evidence of the Queen's intentions, changes the subject to the story of how he was cut as a boy. He tells of the sorcerer who castrated him, then burned his parts. A voice in the flames answered the sorcerer, a voice that still haunts Varys and catalyzed his hatred of magic. It was this hate that motived him to join the fight against Stannis Baratheon and his red priestess. As he speaks, Varys excitedly pries open a large crate, revealing the sorcerer inside. Varys advises Tyrion to be patient; revenge and influence are a matter of time.

Bran Stark sees the three-eyed-raven in a dream. Jojen Reed encourages him to climb a tree in pursuit of the bird. High in the branches, Bran sees his mother, who begs him not to climb. She shakes him pleadingly, causing him to fall. He awakes and shares a knowing look with Jojen.

Queen Cersei and Lady Olenna Tyrell tour the Sept of the Baelor, where Joffrey and Margaery will marry. Olenna speaks of her son's recklessness, which resonates with the Queen. King Joffrey shows his bride-to-be the Targaryen remains and the two discuss the significance of the legacy. Aware of the crowd outside, Margaery encourages Joffrey to greet his people; he has nothing to fear. Cersei looks on as the crowd roars for the couple, at once relieved for Joffrey's safety and jealous of Margaery's influence.

Theon Greyjoy travels with the boy he believes his sister sent to free him. He questions if his father knows he's been tortured, and the boy doesn't deny it. As the duo trudges through a tunnel, Theon discloses his jealousy of Yara and Robb Stark, both of whom possess a clear sense of identity. Theon admits his decision to take Winterfell was the wrong one - his real father lost his head in King's Landing. As he laments, the boy lights a torch and reveals they've returned to the torture chamber. The boy tells two waiting men that Theon killed the others and smiles as he's dragged back onto his cross.

In conference with her father, Cersei makes a case for herself: Has it ever occurred to Tywin that his daughter might have the most to contribute to his precious family legacy? Cersei then points out they need to be concerned about the Tyrells: Margaery is manipulating Joffrey. Tywin tells Cersei he discounted her because she's not as smart as she thinks she is. As for Joffrey, Tywin plans to rein him in as well.

Ros reports to Varys about Podrick's impressive reputation around the brothel. Their talk turns to Littlefinger, who is preparing to journey to the Eyrie to pursue Lady Arryn. Ros indicates he hasn't lost interest in Sansa Stark; he's planning to take her with him.

Aware of her interest in Sansa, Varys visits Lady Olenna and shares Littlefinger's plans with her. They agree that Littlefinger doesn't deserve so lovely a bride, particularly one who will be "the key to the North" should Robb Stark fail. Later, Margaery approaches Sansa and suggests she marry Loras Tyrell. Sansa finds the idea so wonderful it brings her to tears.

Because Jaime refuses to eat, Brienne calls him a coward for giving up after "one taste of the real world where people have important things taken all the time." To spite her, he starts eating. Brienne tells him she knows he protected her from being raped and asks why. Jaime gives no answer.

At a funeral for one of their own, the men of the Night's Watch are angry that Craster feasts while they starve. Craster lets Lord Commander Mormont know he's anxious for them to leave - they'll get no stronger. When one ranger, Karl, pushes Craster too far by calling him a "daughter f***ing wildling bastard," Craster attacks him, only to be knifed by Karl. Mormont sees the body and realizes his men have broken a sacred oath, but Rast drives a dagger into him, killing him too. An all-out brawl ensues and Sam grabs Gilly and her baby. They flee into the night as Rast yells threats after them.

The Brotherhood escorts a hooded Arya, Gendry and the Hound to their secret cave hideout. There, the Hound recognizes Lord Beric Dondarrion and dismisses his group as deserters. Beric explains the Brotherhood Without Banners fights against those - like the Hound - who prey on the weak. When the Hound says it's his murderous brother they want, Arya brings up Mycah, the butcher's son, killed for nothing on Joffrey's order. Beric tells the Hound he'll be judged by the Lord of Light and challenges him to trial by combat.

In Astapor, Daenerys Targaryen surrenders a dragon in exchange for her new army. Slaver's whip in hand, she orders the Unsullied to march forward and startles Kraznys by speaking Valyrian. In her mother tongue, Daenerys commands her army to slaughter all the slavers and for Drogon to unleash dragonfire. Kraznys is engulfed in flame. Once the smoke clears, Dany tells the Unsullied they are free to go or fight for her as free men. She leads them all out of Astapor. 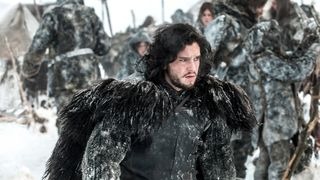 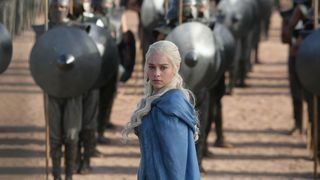 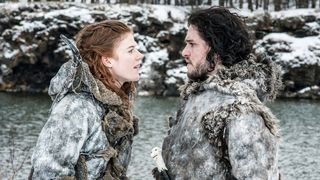 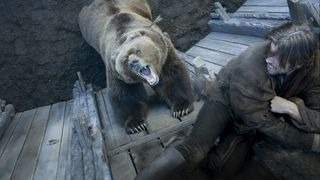 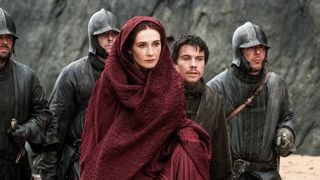 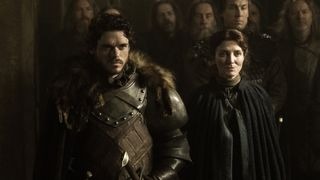