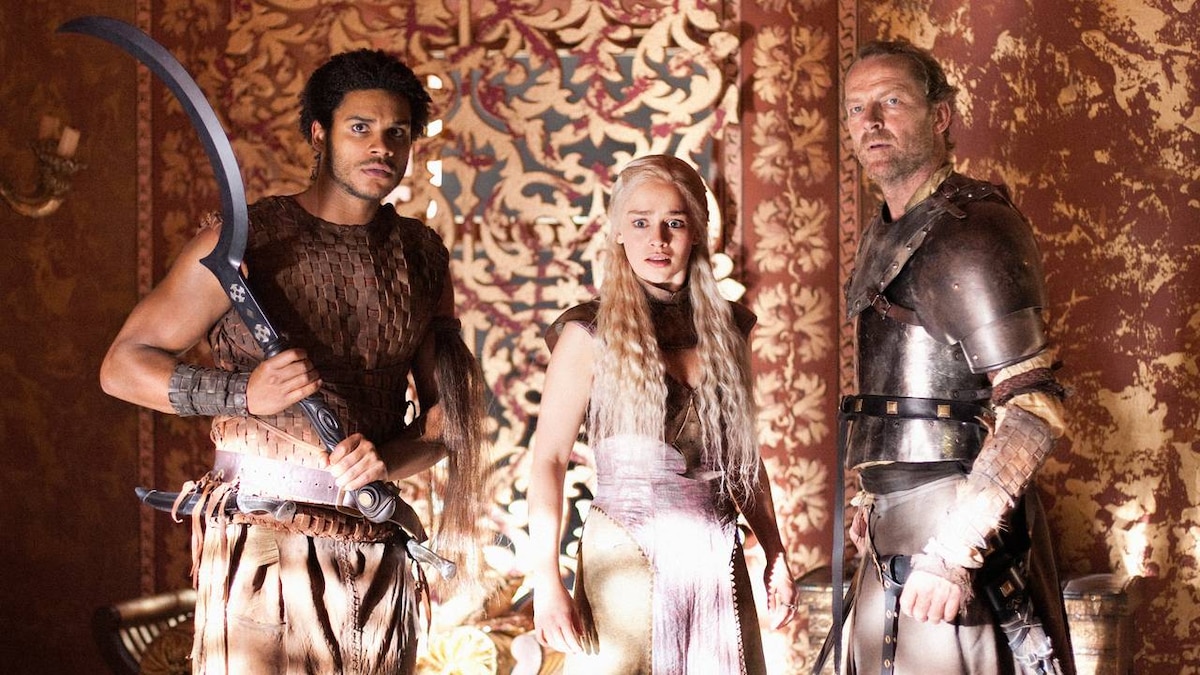 A Man Without Honor

Theon Greyjoy wakes and discovers the wildling Osha has escaped Winterfell with Hodor and the Stark boys. Enraged, Theon savagely beats one of his men and orders the rest to gather the horses and hounds to hunt down the prisoners. They track the boys to a nearby farm.

Deep in the Frostfangs, Jon Snow sleeps huddled behind Ygritte, who wakes and coyly asks him, "Did you pull a knife on me in the night?" Jon, humiliated, forces her to continue their march back toward the men of the Night's Watch, but as they walk, she pokes holes in his allegiances. "You're a boy who's never been with a girl," she says. "Why are you fighting us?"

The Mountain, thinking that the poisoned dart that killed Amory Lorch was meant for Lord Tywin Lannister, has spent the intervening time hanging and torturing suspects. Arya Stark - who is actually responsible for Lorch's death - serves Tywin his dinner, but the commander gives it to her to eat. It's clear to him that she's smart and of noble birth, but he doesn't press her for details. Instead, he tells her about his legacy... while she grips a knife and glares at his throat.

In King's Landing, Sansa Stark timidly approaches the Hound to thank him for saving her from the mob. Equally amused and annoyed by her, the Hound explains that it was nothing - he enjoys killing. Later, Sansa dream of being attacked again and wakes to find she's flowered. Frantically, she tries to hide the stain on her bed, but it's too late - the queen's spies have seen it. Cersei is almost sympathetic about Sansa's future with Joffrey, advising the girl: "Love no one but your children."

Across the Narrow Sea, Daenerys Targaryen is lost without her dragons. Xaro Xhoan Daxos promises to convene the Thirteen to help find the magical creatures. She returns to her chambers, where Jorah Mormont apologizes for failing to protect her from these foreigners. "Is it you I should trust?" she asks, frustrated by the many betrayers who surround her.

At King Robb Stark's camp, the messenger Alton Lannister returns with Queen Cersei Baratheon's response to Robb's terms. Robb recognizes his service by saving him from a cramped cell and instead places him with his cousin, Jaime Lannister. As the meeting ends, the healer Talisa comes to Robb to ask for supplies; he invites her to join him on his journey to the Crag to find what she needs.

Jon pulls Ygritte along behind him on a rope, as she continues to push his buttons. "We're free," she tells him. "We chose Mance Rayder to lead us." She tells him to join her and live beyond the Wall - with a woman. Ygritte, playfully offers herself to him, but he reaches for his sword to drive her off. Knowing she has Jon off-balance, Ygritte breaks loose, pulling the rope from his hands. By the time he catches up to her, she's surrounded by wildling fighters.

Alton and Jaime Lannister sit in their pen at Robb Stark's camp, trading stories of their younger years, when Alton once squired for Jaime. The Kingslayer tells his own story of serving the famous knight Barristan Selmy. As Alton draws closer, Jaime whispers that he may have found a way to escape. When his cousin moves even closer to hear what the famous swordsman has planned, Jaime beats him to death with his bare hands. The jailer, Torrhen Karstark, comes over to investigate and Jaime kills him as well, taking his keys to escape.

Jorah visits the mysterious woman Qaithe in search of Dany's dragons. Qaithe knows that Jorah loves his queen - and that he betrayed her. She tells him that the thief who took the dragons is with Dany now. As the young queen meets with the Thirteen, the warlock Pyat Pree tells her he has stolen the beasts and secured them in the House of the Undying. Using his magic, Pree kills the other members of the Thirteen, elevating Xaro to king.

In Cersei's chambers, Tyrion tells her that their enemies will soon be at their gates, and Joffrey is not helping. "He needs to start acting like a king," Tyrion says, and Cersei's answer is chilling: The boy doesn't listen to her. She wonders whether her sins with Jaime are to blame for the boy's nasty temperament. When she begins to weep, Tyrion takes a step toward her but is unable to offer his sister comfort.A mob of Stark men drags Jaime back into camp, where Lord Karstark demands his head. Lady Catelyn steps in to stop the men from killing Jaime on the spot, but it's clear the man has no intention of letting this go. That night, as the men drink and rage, Catelyn and Brienne realize Jaime will not make it to the morning. Catelyn visits him in his cell, where Jaime says everything he can to get under her skin. Catelyn orders Brienne to hand her a sword.

In the courtyard at Winterfell, Theon addresses the castle's residents, offering a grotesque message of what happens to those who defy him: the charred remains of the Stark boys. Maester Luwin lets out a bereaved howl, as even Theon is disgusted by what he's done.