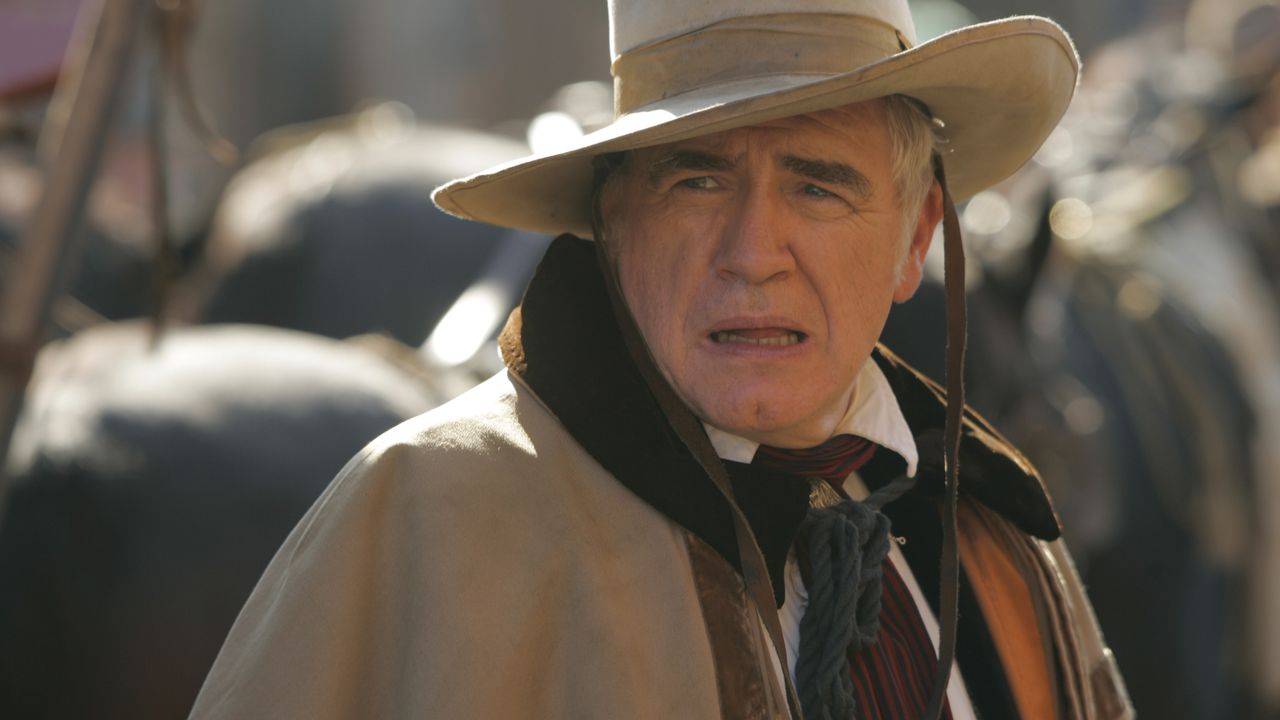 Trixie busts in on Al, accusing him of turning recluse. She's enraged that Alma is set to meet with Hearst, "the Lady's bright idea." Furthermore, she can't understand why Al seems to be caving to Hearst. They're interrupted by the arrival of a stage coach from San Francisco, carrying a dandified Wu as well as Hearst's nigger cook, Aunt Lou. A second wagon arrives with the flamboyant Jack Langrishe and his theatrical troupe, who Swearengen knows from Virginia City. Al orders Trixie to stay close to the Jew and to keep him apprised of the widow. "That's more f**king like it," she says.

Mrs. Ellsworth visits Doc Cochran, who rebukes her for not resting longer, though he admits she seems fully recovered. She takes offense at his concerns, assuming he finds her incapable of sound judgment.

Hearst reminisces about Missouri with Aunt Lou as she tries to impose some standards on frontier life - like clean boots and peach cobbler. He assures her this place is rich.

At the Gem, Wu meets with Swearengen, trying to illustrate his trip with pen and pad: "Wu, San Francisco." Al presses for when Hearst's new Chink employees are to arrive. 'Ten day," Wu informs. Al explains how it will work: he will set up a meeting between himself, Wu and Hearst. "Wu, Hearst, Swedgin," Wu nods. Al emphasizes: "Swedgin must be translator, as only he in camp is versed in both languages."

Ellsworth and Alma argue about her intended meeting with Hearst, Ellsworth not wanting her to go. But she won't be dissuaded and asks that he accompany her. He acquiesces grudgingly.

At the Gem, Merrick pumps Al for information on Langrishe. The flamboyant Jack Langrishe enters, full of innuendo, making a date to talk to Merrick later.

E.B. Farnum announces to Richardson that he's to be discharged, no doubt, being replaced by Hearst's newly arrived Ethiop. And he suspects his replacement will be arriving next. Hearst arrives and assures him he has no plans to replace Farnum and Richardson can remain, but will hand over cooking duties. But Hearst wants information from Farnum about Mrs. Ellsworth and why she changed her mind and requested a meeting. E.B. is no help on this count and Hearst leaves in disgust.

In the jail, Bullock interviews a miner via a Cornish translator, who saw Hearst's guards cut off the legs of a fellow miner who "talked union." "Accident," claim the guards, being interviewed by Utter. Bullock tells Utter to release the Cornish "when they're done crying. Make them understand I was just talking to them."

When the Ellsworths arrive for their meeting, Ellsworth cannot contain his rage and murderous accusations towards Hearst -- and Alma has to escort him out. She offers to come back alone, that afternoon. As they walk through the camp, Ellsworth forbids Alma to present her offer later. In public she must agree: "Your wife. In the thoroughfare. Having once laid down the law."

Swearengen gives Langrishe a tour of the camp, as Jack scouts possible theater locations. Al reveals his hand wound: "You're the first I f**king revealed that to-." "Goes with me to the grave," vows Langrishe.

While Doc and Trixie discuss Alma's volatile mood, he dissolves into a fit, coughing up blood. He shoos a terrified Trixie away.

Bullock wants vengeance for Hearst's murdering of unionizing miners. He tells Sol he's going to go after the man. But when he tells Hearst he is putting him on notice about the murder of the Cornish, Hearst points out that there are no laws he has broken. "There is a sanction against murder," states Bullock. Hearst reminds him that two of his guards had their throats slashed at the Gem while two others looked on.

Merrick visits Blazanov, who's returned from Chicago with a new apparatus and attempts to illustrate "duplex telegraphy." He also reveals, conspiratorially, the news of a woman he met in Chicago. A conversation to be continued on the men's "perambulations."

Hearst goes to Cy Tolliver's to challenge him about the alleged letter from Wolcott, with which Tolliver threatened Hearst. Hearst claims to have his own letter which exonerates him. "What do you want?" asks Cy. "I want you to work for me," Hearst counters.

At the Gem, as Al explains Langrishe's stellar promoting skills to Burns, Bullock busts in, furious over Wu's refusal to hand over the body of the murdered Cornish. Al urges him not to go after Hearst now. But Bullocks demands Swearengen have Wu turn over the body.

Joanie Stubbs chases Langrishe away, who appears interested in taking over the Chez Ami.

When Alma returns to Hearst's, she apologizes for her husband's behavior and reads him her offer. "A vulgar man would ask if...you expected him to produce a jackknife and make himself a capon before you," he responds. He wants to name an amount to buy her out. She refuses. Enraged, his threats become menacing and lascivious: "You are reckless madame, you indulge yourself."

Bullocks spies Alma returning home from Hearst's. He catches up to her, but she passes him quickly. At home, Alma complains to Ellsworth about her meeting with Hearst. "He grinned at me like a jackal." Ellsworth notes he tried to warn her and wonders what happened next. Alma says she was confused and scared by his next intent, but he let her go. Ellsworth, furious, says she almost got what she deserved.

Langrishe's company enjoy Aunt Lou's cooking at the Grand Central. Hearst eats in the kitchen, talking to Aunt Lou. Afterwards, Aunt Lou changes her demeanor as she unwinds, smoking a cigar, slugging liquor and beating the Chinese at their tile game.

At the Bullocks, Utter and Sol eat with Seth and Martha. Seth insists the elections can't be a joke. "The offices have to count for something." He proposes a drastic measure: laws.

Cy shows up at Hearst's to learn the duties of his service. "Your duties will be to answer like a dog when I call," Hearst states, warning him of the punishment when he is displeased. "Such displeasure today brought me near to murdering the Sheriff and raping Mrs. Ellsworth." Cy agrees: "If He hadn't meant me to wag it, Sir, why would the Lord've give me a tail?"

Surveying the camp from the Gem balcony, Al confides to Langrishe he wonders if he's queer, given that he hasn't gone for Hearst's throat. Jack suspects Al cares about what happens to Deadwood, "You'd not see this ruined or in cinders." Al gruffly agrees he'd avoid that if he could. 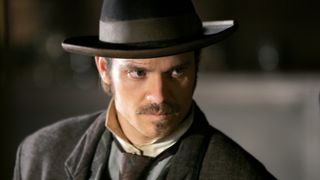 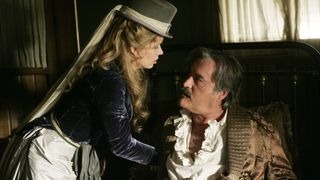 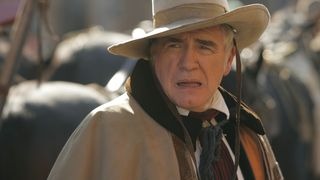 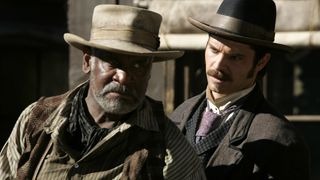 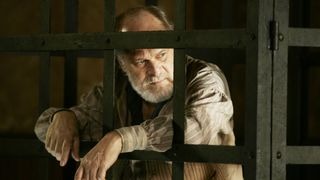 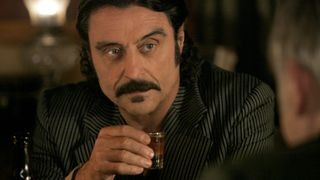 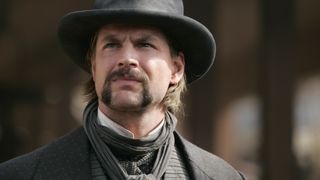 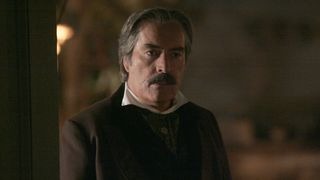 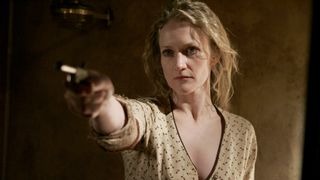