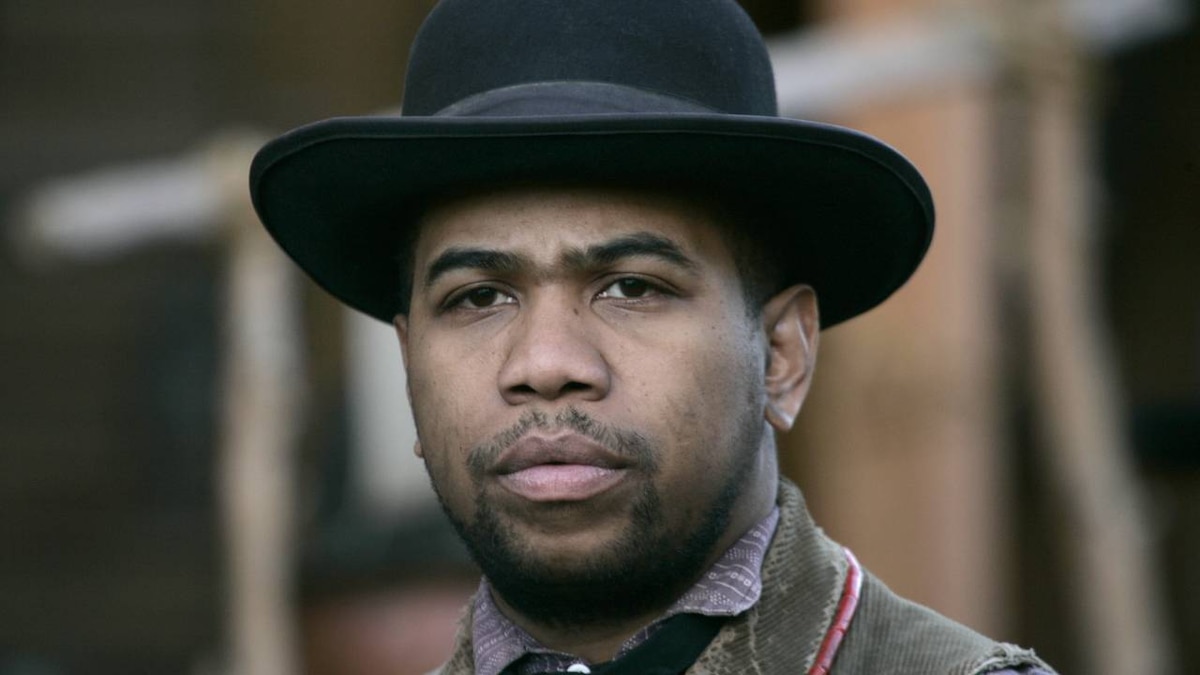 Hearst, having spent the night in jail, demands of Utter if Bullock actually thinks he's accomplished something. Utter feigns discovering the dead Cornish in the cell adjacent, and wonders aloud if it's Hearst's knife.

Bullock tells Martha over breakfast that "things fell apart" regarding Hostetler and Hearst the night before. Swearengen interrupts their discussion, calling on the Sheriff to find out why he arrested Hearst. He warns Bullock that having lost Turner, and now being humiliated by his jailing, Hearst will be on the war path and "we who will be his wrath's object ought to stay close and confide. Our alternative is flight." Bullock agrees flight is not appealing, as Martha, pleased, listens from the stairwell.

Alma, readying herself and Sofia for the day, grows impatient with Sofia, who is concerned by Mr. Ellsworth's absence.

Meanwhile, Steve, drunk, protests outside the livery, defending himself as guiltless in Hostetler's suicide: "My hands are clean and my heart is quiet!"

Bullock arrives at the jail and Hearst demands to be let out. As he is let go, Hearst removes the bloody knife from the Cornish and takes it with him, staring down the Sheriff. "Guess he knows whose it is," notes Utter.

Aunt Lou's son, Odell, arrives in camp. She ushers him into her room, insisting it will be fine for him to stay with her. Hearst returns from jail and is surprised to find Odell in Aunt Lou's room. Realizing her error, she backtracks, but Hearst, asserting his role as owner and employer, extends his own invitation to Odell to stay.

Swearengen coaches Adams on how to handle Tolliver regarding Bullock's incarceration of Hearst. Adams heads off, unsure of the logic, but willing to enact his instructions. When Adams attempts to relay all that Al asked him to imply to Tolliver, Cy is uninterested. He's more excited by Leon's revelation that he's copping for Mrs. Garrett.

Jane and the General build a simple coffin for Hostetler and Jane offers to see to the burying with him.

Leon stands in the thoroughfare, yelling at his own reflection in a puddle, about the bind he finds himself in, with Tolliver wanting to use him to drug Alma Garrett. "Once the bank lady dies of an overdose...I get a bullet in my ear."

Cy goes to Hearst with a plan: "Suppose I could put the Ellsworth claim into play for you Mr. Hearst?" He tells him of Alma's habit. Hearst explodes, furious he didn't have the news earlier, when it could have prevented the loss of Turner. Calming himself, Hearst orders Cy not to kill her - yet.

Leon goes to Alma and tells her he won't cop for her anymore. Catching him after he exits, Trixie puts a gun to Leon's head and warns him to stop selling to Mrs. Garrett. He insists he is no longer the lady's supplier.

Trixie confronts Alma directly: she knows Mrs. Ellsworth is using again. In response, Alma fires her. She closes the bank and heads home for a fix, where she runs into Mr. Ellsworth, come to fetch his things. She appeals to him to reconsider. "An arrangement like ours couldn't become anymore tolerable to you and I couldn't bear it - seeing what youâ€TMd do to yourself," he says.

Cy pays E.B. to keep him apprised of any of Hearst's activities. E.B. goes to Al to return the $200 from Cy, assuming Al is the source. When Swearengen denies that he is, E.B. tells him to consider it a display of his loyalty. "Save us, think of something," Farnum begs Al. "Have I ever not?" Swearengen replies.

Utter, Star and Bullock contemplate the dilemma of Hearst and their options. Leon confides to Stapleton his dilemma regarding Mrs. Ellsworth and Tolliver. Cy interrupts, ordering Leon to hold off on upping the purity, but to continue selling Mrs. Ellsworth her regular dosage.

Trixie goes to Al after her firing, to tell him what's transpired. "I wouldn't mind turning a f**kin' trick." Al lets her have it, ordering her to look after herself and get out of the Gem.

Something gnaws at Aunt Lou. She sent Odell a letter in Liberia, where he was 27 days ago, telling him she was coming to Deadwood. How in that time could he have gotten the letter, booked passage to New York, and made the trip West? "Well mama, maybe I set out without having a letter," he suggests. Much as she wants to believe him, she has doubts. Especially after Hearst reappears and Odell tells Hearst he was at the site of "the find" in Liberia - "The gold." Aunt Lou chastises Odell for mentioning gold to Hearst. She presses her son, and he reveals the truth about his time in Liberia: "'Merican niggers steal off the African 'til the English cheat us out of it." He heads off to find a drink before his meeting with Hearst.

Steve rails about why there's not customers at the Number Ten. Odell shows up looking for a drink. Steve ignores him. Dan shuffles in to see Al and they discuss Dority's reaction to Turner's killing - the trouble with seeing the light go out in a man's eyes - just as Al had predicted. Swearengen wants to send Dan to Cheyenne to see to the hiring of guns.

Jane and the General return from burying Hostetler. Aunt Lou spots them and begs the General to save her boy. Obliging, he goes to the Number Ten to fetch Odell and tries to talk him into leaving town with $742 he has from Aunt Lou, who begs that he not try to run a number on Hearst. But Odell wonâ€TMt listen.

Jane and Aunt Lou share a drink. The General returns announcing his failure with Odell. As she runs out, Aunt Lou swears Hearst ain't getting her boy.

Bullock arrives at the Gem to talk to Al. "Charlie Utter thinks it has to come to blood...and if it has to, that we should strike first." Al agrees and delays Dority's trip. "We'll collect the camp elders, be baffled among friends," Al says as he and the Sheriff head out. Hearst, standing outside the Grand Central as Odell arrives-late-for their dinner, greets the two men with venom.

Joanie comes upon Jane, drunk and shouting in her drinking hole. She offers Jane to come stay with her at Shaunessey's. Joanie drags Jane away, over her objections.