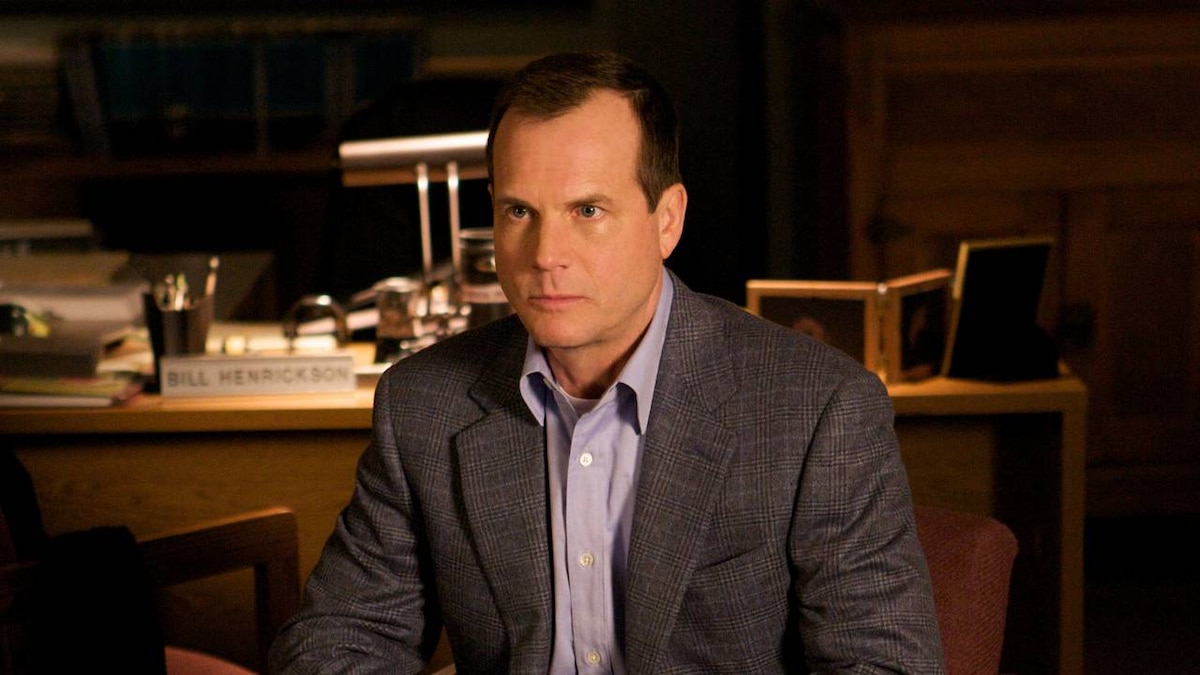 Margene packs up her Goji things, chastising Nicki when she spots her out of bed. Nicki tries to convince Margene to keep quiet about Cara Lynn's situation, but Margene tells her she's done with secrets.

Bill confers with the sheriff about Alby's whereabouts. With no firm information, Bill offers to check with the members of Safety Net in case any of them are thinking of providing him harbor. At home, Bill tells the wives they're going on lockdown. Nicki is disdainful of what protection the police can provide, but Bill insists he is using every resource he can to keep his family safe. Margene plays with baby Jessica while Rhonda stares at the TV.

Cara Lynn sneaks a call to Greg Ivey on Margene's cell phone -- Nicki has confiscated hers. Greg offers to come and talk to the family, but Cara Lynn says he should wait. When Nicki discovers her on the phone, Cara Lynn defiantly tells Greg she loves him.

Bill asks Barn for the caucus room so he can decertify Juniper Creek and withdraw its state funding. Barn refuses saying the schedule is already packed – furthermore, with the spotlight already on Bill, it's a bad time to draw further attention to himself.

Nicki tours the grounds of Fernridge Academy, explaining that her daughter has been "precocious with an older boy." As kids silently file past her like robots, she makes arrangements to have Cara Lynn picked up and enrolled the next day.

Barb goes through housekeeping items with the other two wives, warning them their financial position will be precarious if they lose Home Plus. Confident that Bill won't be indicted, Marge says she's teaching the kids songs and working on care packages for families in Honduras. Nicki accuses Marge of trying to service her own agenda and then attacks Barb for using the situation to finagle the spot of family priesthood holder. Barb assures her she's already found a church that fulfills her spiritual needs; what's she's trying to do is make contingency plans for life without Bill.

Bill rushes home and learns Barb has been attending the Reformed Church of Jesus Christ of Latter Day Saints. She argues it's not in conflict with her beliefs since they allow women to be priesthood holders and are still debating the Principle. Barb scolds Nicki for tattling and swears to Bill she's being discreet about her participation. Before the argument grows more heated, a police officer enters to give Bill an update.

Since Adaleen has thrown her hat in with Alby, Nicki calls Evie to spy on their mother. Evie reports that Adaleen hasn't done anything unusual.

Margie lets Pam know she's quit Goji – her family needs her now – but she'll be reimbursing Pam for her investment. Although Margie remains upbeat about what she's gained from her time with Goji, Pam weeps: She and Carl are separating. They don't have enough money to tithe, and Carl is so broken, he keeps totaling cars. Pam isn't sure these incidents have been accidental.

Bill holds a press conference as a backhoe tears down the UEB headquarters. A dissenter from the compound argues with him, but Bill is unmoved: "The age of false prophets is over."

Rhonda tells Ben they only slept together because she missed Verlan but suggests he marry her and take care of her and Jessica. When Ben protests, Rhonda threatens to tell Heather what happened between them.

Bill briefs his wives about keeping Home Plus running in his absence. Barb insists things will be changing more than Bill thinks; there are needs that won't be fulfilled during the 20-30 years he's in jail. Bill shuts her down: "Marriage is about change. There are sacrifices we all have to make." He insists their eternal sealing will last longer than an earthly prison sentence.

Frank visits Lois at the home and tells her that Bill has purged Juniper Creek of the Grants. With the compound in disarray, he's figured out how they can be together.

The family gathers to play Scrabble and sing around the piano. Bill questions Barb directly: Is having the priesthood more important than following the Principle? Barb insists she doesn't need to choose and that she can serve as a teacher to her new church. Bill reminds her people change churches because churches don't change.

Adaleen vists Alby at his hideout. Selma Grant offers him safety in Mexico but Adaleen is suspicious of her intentions. She wants Alby to leave the country right away, but Alby is insistent that he settle things with Bill – and it's Adaleen who will be pulling the trigger. "No one has sacrificed more than me," says Alby. "I've struggled to stay true."

Margene tries to convince Bill they should run away and do missionary work, or start a church elsewhere. Unable to cope with the idea of being without him for 20 years, she offers to get pregnant so they can have conjugal visits.

Having cleared her house, Nicki ushers in representatives from Fernridge to take her daughter away. Cara Lynn runs to Barb's house where her situation with Greg Ivey is revealed. Barb and Margene are horrified by Nicki's plan and Cara Lynn denounces her as a terrible wife and mother. When Nicki feebly tries to explain why she kept the affair secret, "I didn't think the family could handle another statutory rape," Bill explodes upon being compared to Greg Ivey.

As Heather shares milkshakes with Ben on the porch, Rhonda begins moving her stuff into a car to return to Heather's. She lets Heather know that she and Ben had sex so he'll be forever be comparing everyone to her. As Heather fumes, Ben tries to fix things by offering to take care of them both. Heather throws her milkshake at Ben and leaves.

Barb alerts Bill that Frank signed out Lois and they haven't been seen since. In the Big House, Frank strips out the copper plumbing while Lois remembers what it was like to grow up there. She tells Frank she's getting worse: She's had three bad days in a row.

As Barb makes "Missing" posters for Lois, Bill admits to Barb he no longer trusts her. Although he once thought the spiritual guardianship of the family would be safe with her, now he's not so sure. Barb retorts that if the family splits, it won't be her doing: He's the one pushing everyone to the breaking point. Bill disagrees: He won't accept anything but the family sticking together.

Nicki wakes Cara Lynn and lets her know they've reported Mr. Ivey who was only too happy to be rid of her, having got what he wanted. She tells her daughter that she is a manipulator and a liar undeserving of love. Both mother and daughter look stricken when Nicki leaves.

Stopping at a gas station on their way home, Bill and Barb happen upon Alby and Adaleen. Adaleen draws a gun on Barb while Bill chases Alby through the storeroom. Hearing a gunshot, Bill leaves Alby to check on Barb, but finds that she's turned the tables on Adaleen. Barb realizes that Bill gave up Alby to check on her.

Adaleen swears to Nicki in the police interrogation room that she was brainwashed and Alby has fled to Mexico to stay with the Greens.

Barb tells Bill that Lois saw the flyers and returned to her home. Margene brings in the boys who serenade Bill with 'Blowin' in the Wind.' Nicki spots Cara Lynn in the backyard burning her textbooks on the grill. Cara Lynn repeats Nicki's accusations, admitting she is just a liar and a manipulator. Barb puts out the fire, as Nicki runs upstairs, sobbing that she failed as a mother, failed to protect her daughter, and has been forsaken for her failures. Bill tries to reassure her that she has the love of her family and that's all a part of Heavenly Father's love.

Bill returns to the Capitol to prepare for his hearing. His wives surprise him by bringing him dinner. Margene heads off the restroom, and at that moment, Salty, the desk clerk, is surprised by Alby wielding a gun. Two shots ring out and Bill springs into action to get Margene back. Facing off against Bill, Alby fires, but is startled by Margene and misses. Bill clips Alby's shoulder and tells him it's over.