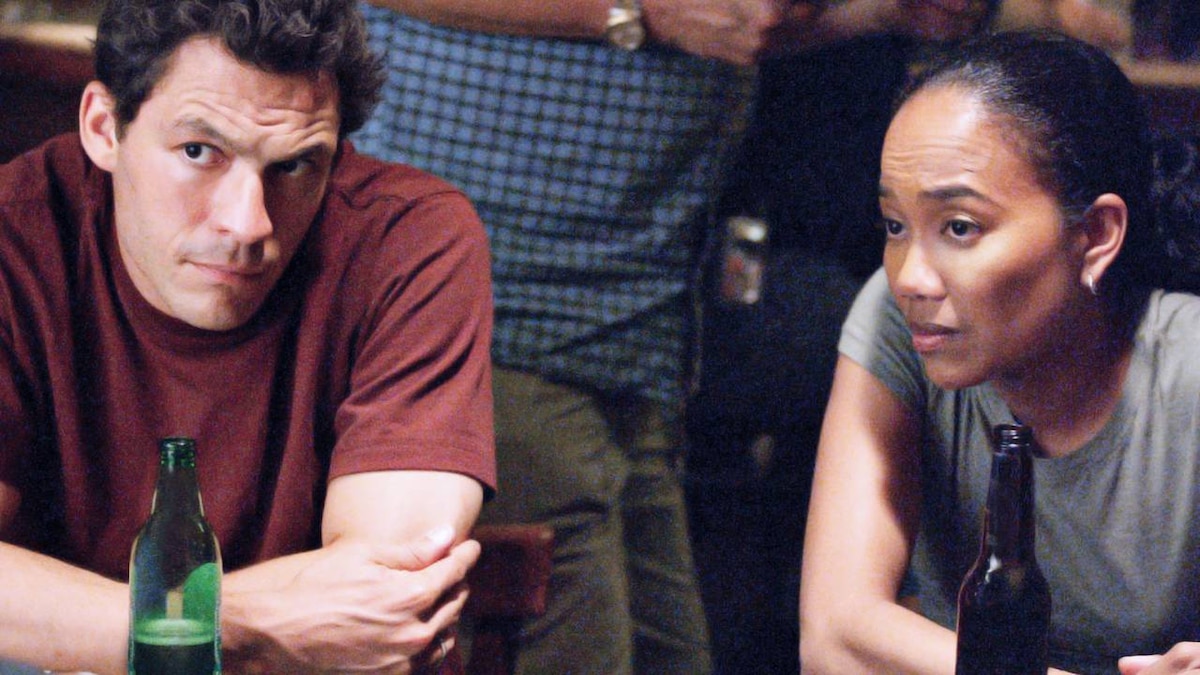 "The gods will not save you." - Burrell

The brutality at Police Headquarters continues as Rawls and Commissioner Burrell terrorize Department Commanders over their failure to reign in the city's crime stats. After being raked over the coals in front of his peers, Major Marvin Taylor, the Eastern District Commander, is further humiliated as Burrell publicly relieves him of his duties and names Taylor's second in command to replace him.

Omar, along with his soldiers Dante, Tosha and Kimmy, case another Barksdale stash house, making plans to take it out. But when they return later to pull off the heist, things go terribly wrong. Barksdale soldiers in another part of the house are alerted to the robbery and open fire. In the fierce shootout that follows, Tosha is shot in the head and killed, accidentally by Dante, and one of Barksdale's team is killed. Bell is furious when he learns that Omar is still intent on pursuing revenge. Speaking of Tosha, he says, "We're gonna cover that girl's wake, her funeral, everything." Back home, Omar apologizes to his soldiers, who are depressed and angry. "Don't do nothing for me," Kimmy tells him sullenly.

The drug dealer who shot Officer Dozerman while doing a buy-and-bust is apprehended and-beaten by the police-makes a full confession. He also reveals that he sold Dozerman's gun to a street punk named Peanut. Sgt. Landsman orders Bunk to recover the gun, as a matter of principle. McNulty, overhearing Bunk's assignment, says: "In one of the most heavily armed cities in the known, gun-loving world, what do these ignorant motherfuckers care about one got-dam semiauto, more of less?"

Proposition Joe summons Stringer Bell to a meeting and tells him that the cops have screwed up. He explains to Bell that the cops believed Cheese was talking about killing a person when in fact he was talking about having killed his dog. "They had the phones tapped?" Bell asks. "Don't matter to me none if they did," Prop Joe replies. "Me and the people I keep close, we don't talk on the phone no how." The point is, however, that the cops are still listening.

Carcetti meets with a reporter from the Baltimore Sun and tells him that the Mayor, in a misguided attempt to save money, does not intend to fund a police academy class this year. Carcetti then calls Burrell to let him know he'll be getting a call from the reporter, and Burrell is furious. Calming the Commissioner down, Carcetti urges Burrell simply to inform the Mayor that someone has leaked the information to the press. Later, when Burrell meets with Mayor Royce, the Mayor is indeed annoyed about the leak and tells Burrell that he must take the heat when the story goes public. "Tell the newspaper the academy class was delayed for some reason-lack of recruits, problems in your personnel division, whatever. Just keep it in your shop," Royce says to Burrell. That way the Mayor can step in and announce that there will in fact be an academy class, and he'll look like the hero. Burrell is none too happy about this, but in the end, as Carcetti reminds him, the goal of reinstating the academy class, is in fact, achieved.

In a meeting at the Mayor's office, Burrell blames the State's Attorney for the high crime rate, arguing that the police bring him cases that go nowhere. "The cases are thin," the State's Attorney shoots back, and soon they bicker loudly, until the Mayor orders them to stop, warning that they'd both better shape up if they want to hold on to their jobs. The tension is thick until the Mayor's chief of staff observes: "I don't think any of us wants to get a real job." When Burrell leaves, State Delegate Watkins urges the Mayor to fire Burrell, but Royce refuses, reminding Watkins that he believes in loyalty.

With their wire dead, Daniels reassigns his detail to a drug dealer named Kintel Williamson who is thought to be responsible for three killings in the last four months. Greggs complains loudly that all the work they've put in on Bell and Prop Joe will go to waste, but Daniels is firm. The biggest priority is bringing down the murder rate. McNulty misses this meeting because he's visiting the prison crime scene where 'DAngelo's "suicide" took place. At the prison, McNulty puts the belt around his neck that 'DAngelo used, but finds it won't tighten properly when he simulates the suicide, proving to him that 'DAngelo was murdered.

When McNulty reports this news to Freamon, Greggs and Pearlman, however, they are angry with him for not sticking with the Daniels' plan. "Man took you off a boat, Jimmy," says Freamon. "He wants to peel his unit off — his unit, Jimmy — and go after the target of his choice, it's his call."

The next day, McNulty learns that Homicide Detective Ray Cole has died while working out at the gym on a Stairmaster.

The other Police Commanders are busy minimizing crime stats by reclassifying their incident reports, but Major Colvin interrupts Mello and the Community Relations sergeant and orders them not to follow suit. When they warn him that Rawls will rip Colvin, he replies, "Five months to my thirty, right? Fuck 'em if they can't take a joke." In fact, they cannot take a joke, and Rawls and Burrell are enraged when Colvin shows up at the next meeting with the only departmental felony report to show an increase in numbers. "Sometimes the gods are uncooperative," Colvin offers by way of explanation. Burrell's response: "If the gods are fucking you, you find a way to fuck them back. It's Baltimore gentlemen, the gods will not save you." After the meeting, when the other Commanders ask Colvin what he's going to do to get Rawls the stats he wants, Colvin again foreshadows the scheme he's hatching and replies slyly: "I thought I might legalize drugs."

Marlo meets with his soldier Fruit and asks why his drug revenue is down so much. Fruit explains that the Barksdale dealers have taken up residence on his block and are stealing customers. Marlo tells him to do something about it. "Take the young guns with you, give 'em a workout." Shortly thereafter, Fruit and his gang show up with bats and inflict serious damage on the Barksdale gang.

Cutty locates his old girlfriend Grace, who has gotten her act together and moved out of the neighborhood. She's married, drives a nice car and teaches school in another part of town. She is less than thrilled to see Cutty, a face from her past, but she is civil to him and even offers to introduce him to a friend who might help Cutty find a decent job.

In a meeting with the cops in his command, Colvin at last reveals the plan he's been hatching, a plan to take back the streets from the drug dealers. The idea is to warn the street level dealers that they can continue to sell drugs, but they must limit their activities to one of three areas of the city full of abandoned buildings. As long as they confine their dealing to these areas, the cops will let them be. But if they don't get with the program, they will be arrested and rearrested until they get the picture. The cops are outraged by the proposal, which in effect sanctions the illegal activity. But Colvin explains further: "You need to take the long view here. Once we have them all comfortable, and all rounded up, once they've been there a bit and get used to putting their feet up, playing with the remote, then we move. Then we go back to being police. Look at it this way, gentlemen: would you rather shoot at fish in the ocean? Or gather 'em all up in a few small barrels and start emptying your clips then?"

Carcetti, with his wife and kids, attends a Democrat fundraiser at the Knights of Columbus catering hall. Spotting an attractive woman, he sends his family home and makes a move, later ending up in the woman's room.

Meanwhile, at Kavanagh's Irish Pub, friends and fellow cops of the late Ray Cole gather to uphold a Baltimore police tradition: a final drink with their deceased friend. With Cole lying in state on a pool table, amidst much revelry and maudlin toasts, the cops bid him farewell. "We're police," says Landsman, "so no lies between us: He wasn't the greatest detective and he wasn't the worst. He put down some good cases and he dogged a few bad ones. But the motherfucker had his moments. Yes, he fucking did."

At another wake across town, Tosha's body awaits burial at a funeral home. The place is crawling with Barksdale soldiers, hoping Omar shows his face. Omar mourns from across the street, hidden in the shadows, smoking a cigarette.

In the Season Three premiere, a wave of urban reform brings down the notorious Franklin Terrace public housing towers.

Colvin feels the sting of Burrell and Rawls during a Comstat assessment of his district's felony numbers.

West Baltimore residents get some surprising straight talk at a community meeting from Major Colvin.

Frustrated in his reform efforts, Colvin delivers a message to the next level of corner management.

Stringer Bell gets an education in construction management; Bunk uses shoe-leather to catch up with Omar.

Herc discovers a blast from the past, which he belatedly reveals to his ex-colleagues.

With Amsterdam running full-tilt, Carver and Truck discover there really is no honor among thieves.

Responding to an officer's call for help, McNulty and Prez turn down the wrong alley, with unanticipated results.

Brother Mouzone returns to Baltimore on a mission of revenge and casts a wide net in his search for Omar.

The wire begins to yield information about the Barksdale organization, though links to the top are elusive.

In the Season Three finale, a reticent Avon readies his troops for a seemingly endless war against Marlo.