Yorkshire, 1834. All eyes are on Anne Lister and Ann Walker as they set up home together at Shibden Hall as wife and wife, determined to combine their estates and become a power couple. Anne Lister’s entrepreneurial spirit frightens the locals as much as her unconventional love life and, with Halifax on the brink of revolution, her refusal to keep a low profile becomes provocative and dangerous.

The second season again uses the real life diaries of Lister – part of which were written in code – as its source, with every part of Lister’s story based in historical fact and the five million words she wrote in her journals. Read more about Lister and her diary at the West Yorkshire Archive Service Exhibit blog.

Start the Second Season for Free

Watch the first episode of Season 2 for free.

Welcome back to Shibden Hall! Catch up with Halifax's finest now.

1.I was just passing 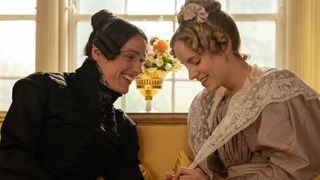 2.I just went there to study anatomy

Lister begins a playful but dangerous courtship of Ann Walker, who soon finds herself captivated by her charismatic and unusual neighbor. 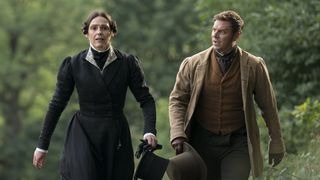 3.Oh is that what you call it?

Lister and Ann Walker's liaison takes a thrilling turn, as mutual acquaintances begin to chatter about their relationship. 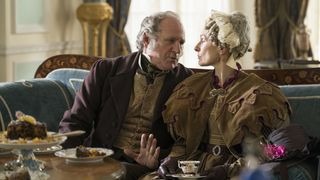 4.Most women are dull and stupid

Lister & Ann Walker are consumed by the excitement of their affair, until bad news yields a crippling secret.

5.Let's have another look at your past perfect

The arrival of a figure from Ann Walker's past stirs up trouble and prompts Lister to deal with matters in her own inimitable fashion.

6.Do ladies do that?

8.Are you still talking?

Season One Finale. Difficult news from Shibden spurs Lister to leave behind her new lifestyle in Denmark.

Faith is all
As they prepare to move in together, Lister presses her new wife to change her will to help strengthen their future together, but Ann finds herself nervous of public opinion. Meanwhile, Ann’s protective tribe of relatives grow increasingly suspicious of Lister’s motives, and Mariana’s devastation puts a damper on the couple’s upcoming honeymoon abroad.
Two jacks don’t suit
After another former flame threatens to derail their idyllic honeymoon, Lister tells Ann about her complicated relationship with Mariana – but withholds some crucial information. Back in Halifax, Ann’s family hatches a plot to marry her off to a gentleman, and, at the Sowden farm, Suzannah becomes consumed with regret about moving in with an increasingly volatile Thomas.
Tripe all over the place, presumably
After launching a charm offensive in hopes of winning over Ann’s relatives, Lister quizzes Halifax’s men of industry on what a new railway station could mean for the town. Meanwhile, Lister’s presence is requested at Lawton Hall by a distraught Mariana, and Mary finds herself terrified of Thomas.
I’m not the other woman, she is
During her visit to Lawton Hall, Lister remains determined to draw a line in her tempestuous 20-year relationship with Mariana, who questions her connection with the sheltered Miss Walker. Back at Shibden, Ann gets a surprise visit from James Ingram, an old friend sent by her meddling cousins.
A lucky and narrow escape
After returning from an emotional visit with Mariana, Lister throws herself into furthering the Tory cause ahead of a pivotal election. Meanwhile, Ann is stunned by her sister’s move to evict their shared tenants amid growing laborer discontent. Then, as an angry mob smashes Halifax to pieces, Lister refuses to keep a low profile.
I can be as a meteor in your life
While trying to brush aside attempts to ridicule her, Lister focuses on building her empire… and enters a risky game with her expanding network of coal advisors. Later, Ann uncovers her family’s hidden schemes for the Walker estate, and a shocking letter drives a serious wedge between Ann and Lister.
What’s all that got to do with Jesus though?
Despite Parker’s cautioning, Lister furthers her plan to construct a grand hotel in Halifax. Meanwhile, Ann’s proposal for a division of the Walker estate sends shockwaves through her relations, as her brother-in-law, Captain Sutherland, begins to suspect that Lister has a malicious influence over Ann.
It’s not illegal
After a trip to London blighted by marital tension, Lister and Ann return to Halifax. As she and Ann prepare for the Northgate cornerstone ceremony, Lister is dismayed by Marian’s intention to leave Shibden and terrible news about an old friend. Meanwhile, Captain Sutherland arrives from Scotland determined to destroy Lister’s reputation.