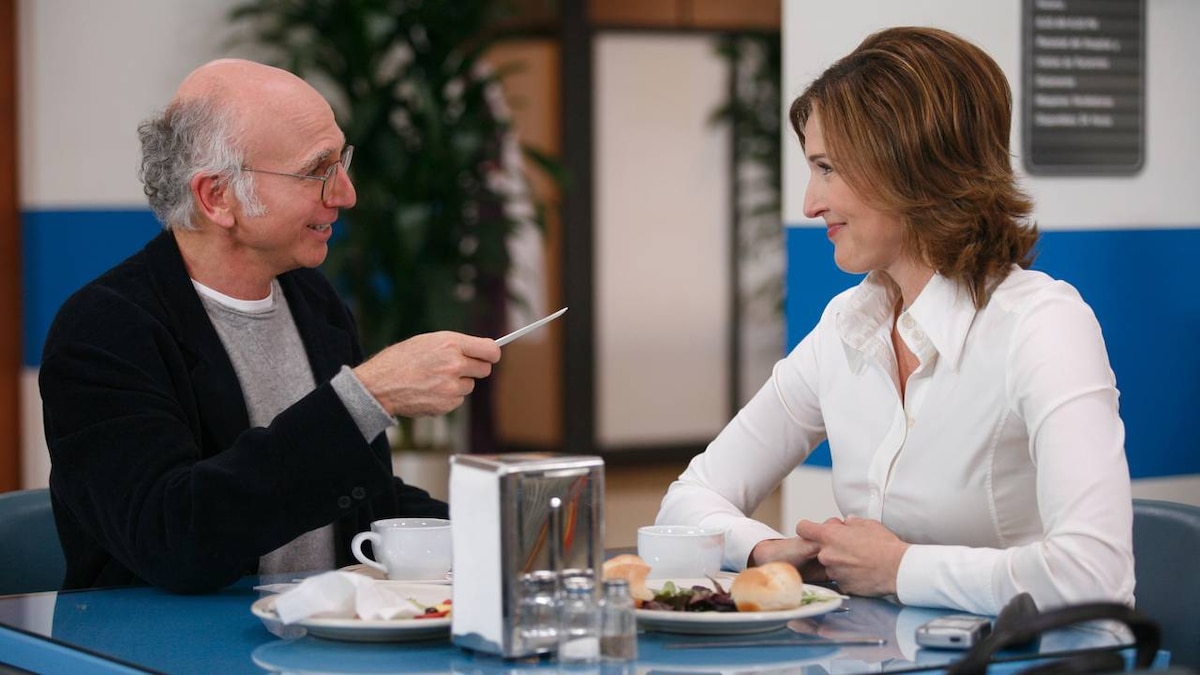 Larry calls out to Auntie Rae to show her a patch he cleared in the yard for her to garden. As she hugs him with appreciation she feels his erection, and runs away in disgust shouting, "You're disgusting!"

Confiding to Jeff over lunch at the hospital cafeteria, Larry explains that Auntie Rae went over the amount of time he can experience human contact without getting aroused (1). Jeff empathizes and they move on to discuss his impending operation to help his terrible snoring. He also tells Larry he's excited because Ben Stiller may sign with him as a client. Larry suspects that their waitress isn't nice to him because he's bald, an idea Jeff waves off. When Larry goes to drop off a prescription, Jeff eats his fries while he's gone. Jeff denies knowing anything about the missing fries when Larry returns but the woman at the next table, Dr. Sheila Flomm, tips Larry off that Jeff ate the fries.

Leon chews Larry out about "stabbing" his Aunt in the stomach. Larry defends himself (2). He promises no more hugging and insists that he's trying to get a date so he's not so starved for affection.

Larry makes a date with Sheila Flomm (3). When he goes to pick her up, her brother and sister are staying with her. Larry explains that he has the Black's staying with him and knows what it's like to have long-term house guests. He asks her about his groin problem (4) and she explains how he should massage it. As the evening progresses she suggests they move it to her bedroom (5). But by the time she gets upstairs to join him, she announces her brother and sister have come home and they need to change their plans (6).

While Larry is sitting in his car in his driveway trying the massage Dr. Flomm recommended, Auntie Rae spots him and runs off in disgust. Later, Larry is having lunch with Sheila Flomm and she gives him a note (7) to read expressing her feelings. When he excuses himself to use the men's bathroom, Larry overhears someone using the N word while making a cell phone call. Outraged, he relays the story to Sheila back at their table and just as he says the N word, quoting the guy on the phone, an African-American doctor walks by and lets Larry have it in a tirade of anger.

The African-American doctor, Dr. Page, comes into Jeff's surgery in a rage, and insists that Jeff's head be shaved for his surgery. Susie and Jeff are horrified by Jeff's bald head, not to mention the news that the surgery was cancelled. Dr. Page apologetically explains he'd just been victimized in the cafeteria and was so upset he mistakenly shaved Jeff's head. As he explains the N word incident, Susie and Jeff realize that it must have been Larry that Dr. Page was so mad at.

The Greene's show up at Larry's screaming that Jeff's bald head is Larry's fault. Larry explains that he was simply relaying a conversation he overheard – but as he gets to the N word, Loretta hears him and calls on Leon and Auntie Rae who start screaming as Larry struggles to defend himself. The Blacks say they're moving out. Susie offers for them to stay at their place.

A bald Jeff meets with Ben Stiller, pitching his career advice, but all Ben can see is Jeff's bald head. Jeff meets up with Larry and reports that Stiller said no. Larry says it's because he's bald and when Jeff goes to order from the waitress, she now is rude to him. Jeff asks him how Larry deals with it. Larry explains he gets support from his bald brothers (8).

Larry takes his doctor's note to the pharmacist (9) who translates: "Larry had a great time last night. Would love to get together Friday night at the Bellaire Regency Hotel. Just the two of us... so tired of all these brothers and sisters around. I know you feel the same way. Tell me your life wouldn't be better without the Blacks." Larry tries to explain the context of the note, but the African-American pharmacist isn't interested. In his anger, he gives Larry the wrong Rx and Larry unwittingly starts taking estrogen.

When he meets Sheila at the hotel, Larry is disturbed to discover that his 5-Mississippi rule isn't working; he is unresponsive. Sheila drives him home, where Larry discovers his Rx is wrong. Later that night, moping on his couch, Larry reminisces about the good times with Cheryl. But he isn't alone long; unable to sleep with Jeff's snoring, the Black's return to Larry's in the middle of the night.

Jeff testifies in a hearing before the hospital board about allegations of physician misconduct, explaining all the suffering he's experienced for being bald (10). Next, Larry testifies, explaining how he overheard the guy in the bathroom talking on the phone and just as he is about to explain how the guy said the N word, Dr. Page joins them. Larry, frozen with fear, won't say it. As the audience, the Greene's and the medical board all shout at him to say it, Larry shakes his head, shutting up for once.

(1) Larry only has 5 seconds before he loses control. Jeff says he has discipline "down there," his penis is very discerning. Larry's is a feral tiger.

(2) Leon calls Larry's defense his Five Second Rule. "1-2-3-4-5 and it comes out." Larry insists he needs to put "Mississippi" between the numbers – that's how long it was.

(3) Making the date with Dr. Flomm is very similar to scheduling a doctor's appointment.

(4) Recall from the previous episode, Larry suffers from twisted balls due to his long balls.

(5) "Go upstairs, remove all your clothes and I'll be in to see you in a few minutes," she tells him.

(6) "We need to reschedule, why don't you get dressed and I'll meet you in the foyer."

(7) Larry can't read the note because doctors have terrible penmanship and he asks a passerby to help him decipher it, but she can't help either.

(8) Jeff asks if there are meetings. No, no meetings, Larry explains. But they recognize each other on the street and nod in support.

(9) Pharmacists are the only ones who can read doctors' handwriting.

(10) His daughter locks herself in her room, his wife has turned into a witch. Ben Stiller won't work with him. He's losing millions.