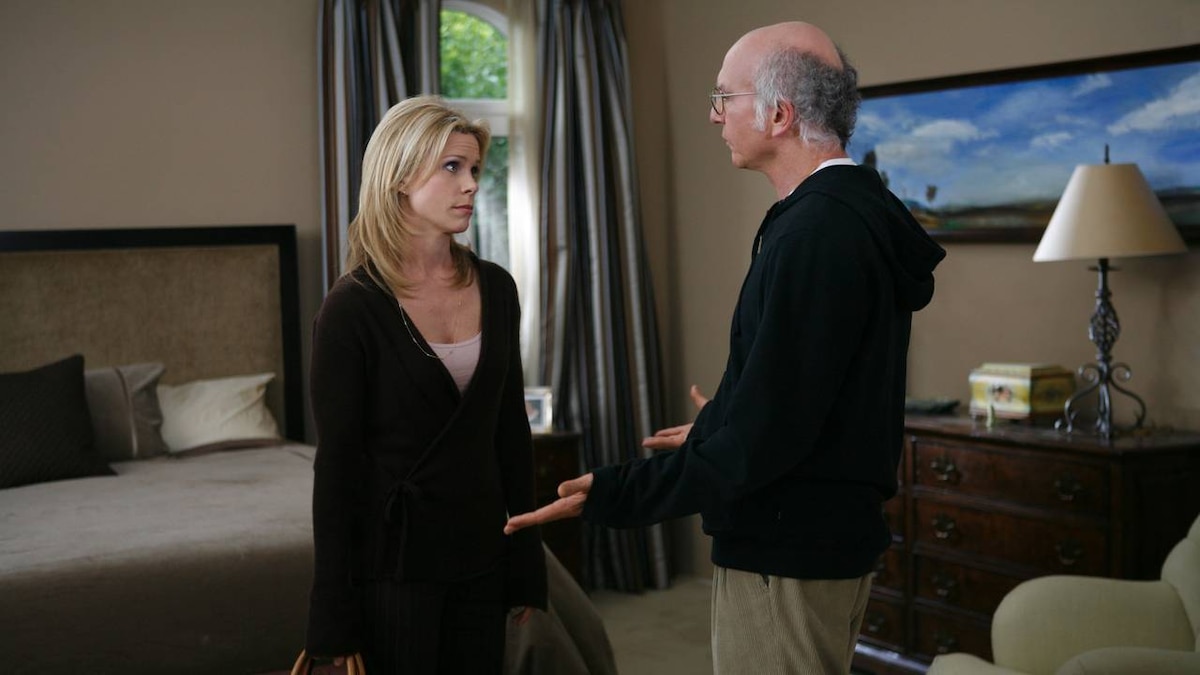 Larry finally has the Tivo guy at the house to check on why the Tivo is pixilating, causing them to miss shows, when Cheryl calls from an airplane phone. She's on a turbulent flight in the middle of a storm and wants some comfort but Larry can't quite hear her and is too worried about losing the Tivo guy to pay much attention. He tells her to call back. Cheryl hangs up in disgust and grabs the hand of the man seated next to her as the plane bumps along.

When Cheryl arrives home, she announces to Larry that she's leaving him. Larry defends his bad phone behavior, invoking the Tivo guy, but Cheryl says it's "all of it (1,2)." Besides, after she thought she was going to die and he hung up on her, she got talking to the guy sitting next to her. Larry can't believe she met someone else and demands to know if he's as prepared as Larry is at all times (3). Cheryl doesn't know, but says he owns his own underwear company (4).

Cheryl goes to stay with her sister Becky. A despondent Larry interrupts a dinner party at the Greene's who are entertaining the Funkhousers. "Cheryl left me," he says and everyone jumps to console him. Susie makes him a plate (5) and Larry explains about the phone call from the plane and the Tivo guy. Even though everyone thinks Larry was in the wrong in this case, Susie states that people are going to take sides, and they all agree to stand behind Larry. When the phone rings, Susie won't let Larry answer it (6).

Larry remembers that he made a dinner reservation that night for Primo's and calls to cancel. The hostess asks why and Larry explains: "My wife left me." The hostess doesn't believe him and scolds him for not giving more notice. Hanging up, he notices an invitation to their friend Simon's party. Larry recently loaned Simon money and Larry's upset he's throwing an extravagant birthday party.

Returning home, Larry runs into Cheryl who is picking up more of her things. He asks her to call the hostess at Primo's to confirm his story but Cheryl refuses.

Simon stops by Larry's and Larry complains that the money he lent him wasn't intended for a party. Simon insists Larry's money was for something different. He also tells Larry he's not invited to the party, he and his wife have chosen Cheryl.

Picking up his clothing from the drycleaners with Jeff, Larry inadvertently knocks a signed photo of Lucy Lawless off of the wall. When the drycleaner gets upset, Jeff tells Larry he'll make a call to her agent and get a replacement.

Larry goes to Primo' for dinner by himself and suspects that he's being blackballed when it takes a long time to get a table for one. Marty and Jodi Funkhouser see Larry and Marty breaks the news that they've decided to go with Cheryl after all.

Larry stops by Becky's but she tells him Cheryl's not there. But Larry talks his way in, spying Elenna the housekeeper - who has also gone with Cheryl. Then Cheryl and her date appear. Larry grills Cheryl's date on whether he has mints, a pen and tissues (he does), and challenges him on the need for flyless underwear (7).

Lucy Lawless accompanies Larry to the drycleaner to sign the replacement photo in person. They hit it off and Larry invites her on a date (8) to Primo's. They run into Ted Danson (9) and after Lucy leaves, Larry asks Ted why he hasn't been invited to his charity event and Ted admits he's picked Cheryl.

At home, Larry tells the Blacks he's got a date with Xena the Warrior Princess and they are impressed. But on his way out, he remembers he has to Tivo the Lakers game and turns back quickly, but doubles over in pain. Leon rushes him to the ER where Larry learns his testicles got ensnared in the fly of his underwear (10). The doctor prescribes No Fly Zone underwear, icing his testicles and no sex for a week.

At Primo's, Lucy is enjoying Larry's company but when Larry complains about not getting a table, he's told by Primo that he won't be getting one: they've chosen Cheryl. Lucy invites Larry over to her house but when Larry tells her he can't have sex for a week, she is disgusted with his presumption and storms off.

On his way home, Larry stops at Simon's party but he's not on the list. While he's arguing with the bouncer, Richard Lewis shows up. Lewis has been hired to perform for the night for $10k - the amount of money Larry loaned Simon. Larry insists he's paying for Richard and tries to stop him from entering. But Lewis argues it's business, not personal. They tussle and Larry collapses in pain: his long balls were hit.

Back at home, Larry ices his testicles and tries to watch the end of the Laker game on Tivo, but it freezes, pixilated.

(1) This includes a range of Larry's annoying behavior, including talking during sex. Chit chat, not dirty talk, e.g. wanting to discuss who can't tell the difference between real and fake crab meat.

(2) It also includes the fact that people always ask "How do you stay with him?" and Cheryl has always claimed there's another side to Larry that people don't see. But she now realizes: there is no other side.

(3) Does the new guy have mints, a pen and a tissue at all times? Larry does.

(4) The new guy invented No Fly Zone, underwear with no fly.

(5) It's a small plate, which Larry complains about. Susie insists it's the same amount of food, just a smaller plate.

(6) The Greenes have a rule: no answering the phone during dinner. Larry thinks it might be Cheryl.

(7) According to Glenn, Cheryl's date, research shows that 74% of men go over the fence, while the rest go through the gate. Larry, however, believes that the penis needs an option.

(8) Larry uses the "I'm not a cool guy" line, which is a new approach for him and he's impressed with how well it works and reports this to Ted, who is reservedly pleased for Larry.

(10) "Twisted balls" is the layman's term Leon uses for Larry's condition and notes that Larry has long balls.