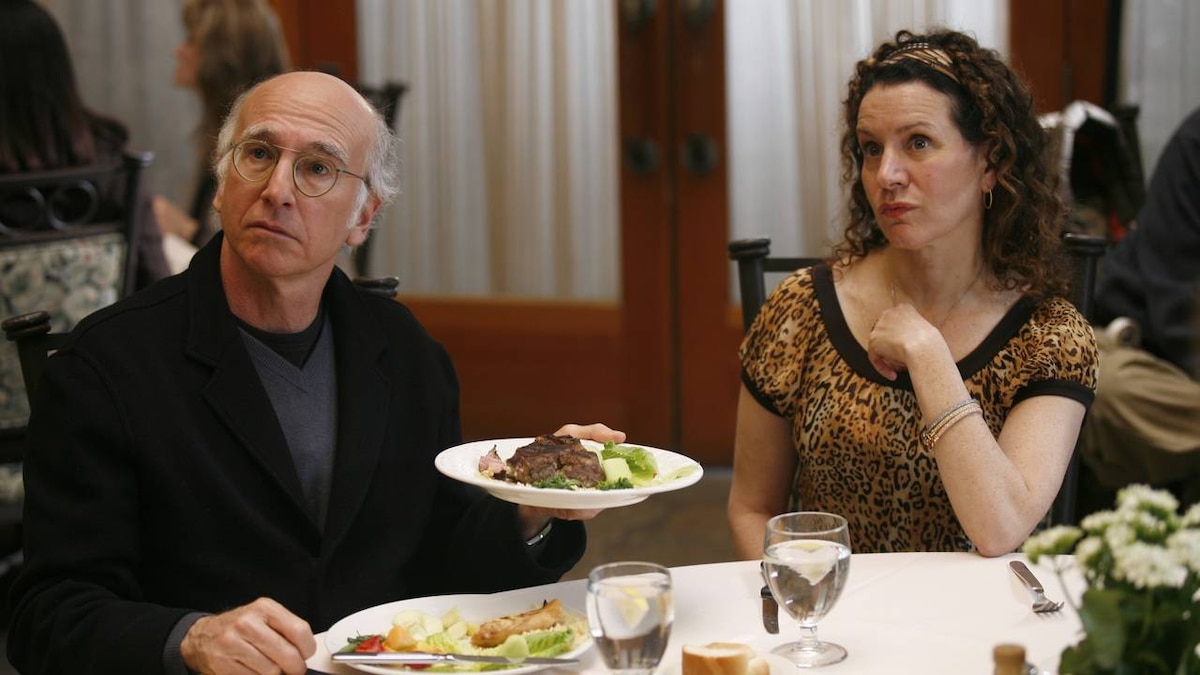 On the way to the bathroom at work, Larry sees Cha Cha, who is seated at a desk just outside the Men's room. She thanks Larry for his help in getting her the new job, just as her boss Bart, a producer, greets Larry and confirms they're on for lunch with the wives. Cha Cha keeps chatting but Larry manages to duck into the bathroom. When he exits, she comments: "That was quick."

Before lunch, Jeff stops by and Larry complains that Cha Cha is like a bathroom monitor (1). When Jeff asks why Larry doesn't just go at home, he explains that Cheryl uses environmental toilet paper and he can't abide it. At the end of lunch with Larry, Cheryl, Jeff, Susie, Bart and his wife Barbara, Larry jokes with Bart that he can fire Cha Cha, it would be fine with him. Cheryl changes the subject, praising Barbara for attending lunch when they have nine children. Everyone is impressed except Larry, who finds it a little egotistical (2). Bart mentions his father has opened a retro barber shop and Larry and Jeff vow to try it. When the officious waiter Daviday comes to ask how everything was, Susie announces she'd like a doggie bag. When Daviday discerns that she is going to feed the food to her dog, he informs her that it is not the restaurant's policy (3) to allow that. As their argument escalates, Larry intervenes by asking to take the food home himself. Daviday demands to know if Larry intends to eat the leftover steak himself. When Larry promises he will, Daviday intones, "We shall see."

Richard stops by to see Larry and suggests a double date with Cheryl and Cha Cha to see a movie. Larry says he'll have to check with Cheryl and confesses to Richard that Cha Cha isn't really working out, she's too chatty. Richard notes that she's told him Larry goes to the bathroom 10-14 times/day and they are both concerned. Larry loses his temper, accusing her of having bowel concern (4). Defending his bathroom habits, Larry challenges Richard to a colon contest (5). Fleeing their argument, Larry retreats to the bathroom. When he flushes, the sound -- like a sonic boom -- sends him reeling, and to the doctor for his ear.

During his exam, the doctor asks Larry a series of questions and when he gets to the question of whether he's urinating a lot, Larry gets defensive (6). He resists answering. Exasperated, the doctor recommends that Larry "stay off the right ear" (7) and talk to a therapist about his bathroom issues. Larry demands to see another physician but is told he'll have to make another appointment to see someone else: "This isn't McDonalds," the doctor informs him.

As Larry leaves, a skinhead in the waiting room growls at him: "What the f**k you looking at Jew boy?" and calls him a "f**king faggot." Shocked, Larry slunks out (8).

When Larry gets home, he is greeted by the Blacks who are upset about the toilet paper situation being like Port Authority toilet paper (9). Larry offers to get them soft toilet paper if they allow him access to their bathroom, and swears them to secrecy. He then pulls Leon aside and tells him about the skinhead incident. Leon tells him in those situations he needs to "get in that ass." (10).

Larry calls Richard to confirm their double date and Cha Cha answers. She suggests they go to a fancy restaurant and he agrees to tell Cheryl. Struggling to talk lefty (11), Larry has to keep pulling the phone away from his ear. He asks Cha Cha what she's wearing. Confused, she asks if he means right now. But Larry has pulled the phone away from his ear and doesn't hear her. He starts to breathe heavily with the frustration of talking lefty and asks again what she's wearing. Disgusted, Cha Cha hangs up.

Larry is enjoying his old-fashioned haircut at the barber shop and chats with Bart's father. When the barber asks if everything seemed OK with Bart, because Barbara just had a miscarriage, Larry brushes it off: "They already have nine kids." Upset, the barber tells Larry he's done and whips him mercilessly with his towel, sending Larry and Jeff running.

When Larry drops Jeff at home, Susie yells that the dog has been shitting all day after being fed the food from the restaurant. She's certain Daviday must have tainted it and demands that Jeff confront him. But Larry reminds them he promised he'd eat the food. Even better, according to Susie. Larry has to tell Daviday he's been sick as a dog since eating the food. When Larry confronts Daviday for tampering with the food, the waiter is skeptical of Larry's claim he ate it and they stare each other down.

Larry returns home to use the bathroom in the Black's guest room. When he emerges, Cheryl is there and discovers the soft toilet paper (12). The Blacks immediately blame Larry but he is saved by the doorbell. Richard lets himself in and accuses Larry of being a perv for hitting on Cha Cha on the phone. And now she's been fired because Bart heard about Larry's insensitive miscarriage remark and doesn't want anything to do with anyone who knows Larry. Larry insists "Nine's enough (13)." Promising to get Cha Cha's job back, Larry reaches for the phone to call Barbara to apologize. Richard won't accept a lefty call, however, he insists on a righty call. When Barbara answers she screams at Larry.

Leon rushes Larry to the doctor for his re-injured right ear. In the waiting room, Larry spots a bald man emerging and jumps up to get in his ass. But as he starts yelling, the nurse rushes out, informing Larry that the man is not a skinhead, but a chemo patient. Larry apologizes but moments later, has to race to the man's rescue again when he hears Leon in the hallway, also getting in that ass.

(1) Traditionally, a person assigned to watch a school bathroom to make sure no one does anything against school policy. e.g. smokes cigarettes or marijuana.

(2) Having nine children is like having "Nine of you," Larry tells Bart.

(3) According to Daviday, the restaurant doesn't provide doggie bags for dogs, allowing no food prepared for people to be fed to dogs. He suggests Susie buy kibble instead.

(4) Larry finds Cha Cha's interest in his bathroom habits to be obsessive and intrusive. Richard insists he has the same concern, and it's concern for Larry's health.

(5) Richard brags that he could pit the VHS of his colon against Larry's any time.

(6) Larry finds a question about urination frequency irrelevant to his ear problem. He views it as a private thing, not to be discussed with strangers. "We're not on a bus. I'm a doctor," the doctor points out.

(7) "You want me to talk lefty?" Larry asks. Yes, that is what the doctor means.

(8) The phrase Larry later uses to describe to Leon his reaction to the skinhead. e.g. "I slunk out." Leon points out he "punked out."

(9) Cheryl is an environmentalist and stocks the house with post-consumer toilet paper. Larry and the Blacks agree it is rough and unpleasant.

(10) According to Leon, Larry must: Pull the asshole open. Step into their asshole. Close the door behind you. Take a spray paint can "Larry was here." Eat snickers, leave wrappers and garbage, f**k his whole asshole up. Open it up and step out again."

(12) Cheryl explains that soft toilet paper takes millions of virgin trees to make, which leads to global warming, which leads to hurricanes like the one that displaced the Blacks.

(13) To back up his argument, Larry tells Richard how things are in China, where you are only allowed two kids. If you have three, they execute. "Kill the baby?" Richard asks. "Not the baby, idiot. They kill the parents." When Richard doubts this Larry backs down: "Maybe they don't execute but they give you a good dressing down."