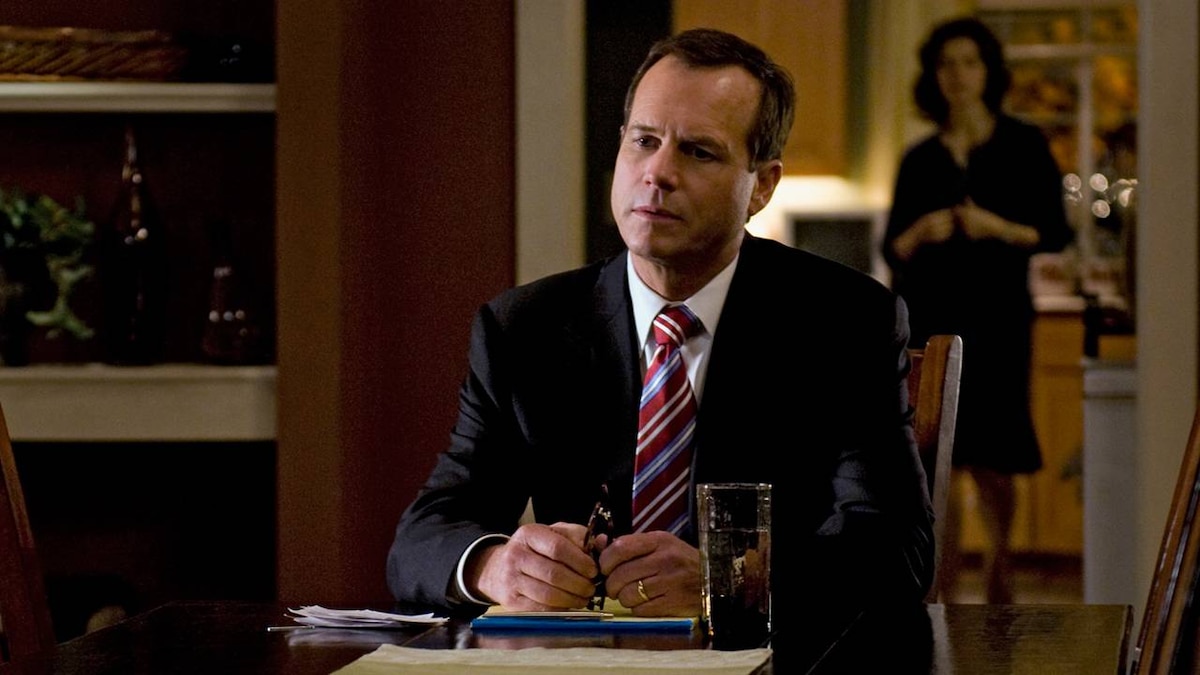 When Malinda informs Nicki that Adaleen has decamped to the Kansas compound, Nicki gets suspicious and has Bill look into her mother's whereabouts. Bill's spy in Kansas alerts him to rumors of new indictments coming down from the Attorney General's office for intermarriage at the Kansas compound. Meanwhile, in Roquet's clinic at Juniper Creek, JJ and Malinda are forcing the young doctor to keep Adaleen sedated and hidden. Bill confronts JJ about the pending indictments, but he denies there's anything to it - and denies knowing why they can't locate Adaleen. When Bill refuses to let him see Cara Lynn until they hear from Adaleen, JJ is enraged. Next, Bill questions Alby about the indictments, having seen no evidence of intermarriage in the nuptial records that Alby let him examine. Alby assures him they are on the same side and that he supports his election bid - as long as Bill supports his own pending announcement that he is succeeding Roman. Bill agrees, but only if Alby has plans to continue Dale's reforms. Alby bristles at his lover's name, retreating behind his veil of denial and grief.

Bill goes to Paley and reveals he has damning information about Marilyn and her unethical business practices - and those she's in bed with. Picking up on the threat, Paley agrees to get Marilyn to ease up efforts to derail Bill's campaign.

The wives head off to Dillard's to shop for coming-out dresses for election night, and in the dressing room, Barb and Nicki battle over who gets to wear a red suit. Margene - trying to explain Nicki's erratic behavior - lets slip to Barb that she is infertile.

When the young meth addict Leila is caught dealing at the casino, Barb learns she is Tommy's niece and he and his father have been trying to handle the drug problem on the reservation on their own - by lying to the DEA. She insists Tommy let them help to prevent putting the casino - and her family's dreams - at risk. "Is it your dream Barb?" he challenges "Because I don't believe that's what's in your heart." Later, when Barb fills Bill in, he takes matters into his own hands.

Ana storms into the Henrickson household, accusing Bill of bullying Margene into divorcing Goran after the election. "Margene doesn't want to give up her business, and she wants to stay married," Ana insists. Margene admits she does plan to end the marriage, but she doesn't want to admit that the real reason is because she doesn't trust her feelings for Goran. "Why can't everyone leave me alone?" she demands as she storms out.

As Nicki and Barb try to coax Wanda to speak, Dr. Roquet calls to cancel Nicki's appointments saying her treatment isn't working and pregnancy isn't an option. Distraught, she flies off the handle later, when she learns Barb and Margene have hatched a plan for Margene to give Nicki an egg: "Your egg, Bill's sperm in me? It's disgusting!"

One of Don's sons throws a rock through the Henrickson's window. "You ruined my life!" he screams at Bill. When Don retrieves his son, the old friends share a tense moment as Don assures Bill, "We're still pulling for you."

That night, the indictments comes down for inbreeding at the Kansas compound. When Barb voices her concerns about coming out as polygamists in this climate, Bill shuts her down.

The next day, Bill learns that a story is going to break that night (the eve of the election) about Bill fathering Ana's child. Nicki and Margene accuse each other of being the leak. Bill shows up at Marilyn's waving the white flag: "Your story is about to break, you got me." He asks her to kill the story. She agrees to try -- if he keeps his mouth shut about her business practices.

Margene confides to Ana that the reason she needs to get a divorce is that she's attracted to Goran. "I have no boundaries, that's my problem," she sobs. Ana tells her that she and Goran have spoken about the spark and it's fine with them. Goran appears and wraps Margene and Ana in a hug, assuring Margene she's not a tramp.

As Bill and the wives watch the evening news, and the story doesn't break about Ana, Barb admits that she's the one who was the leak: "The world is not ready for us, and we are not ready for it." Still, the next morning she plays the role of doting wife and goes with Bill to cast her vote. But when she tries to reach Tommy, she learns that Bill had Tommy and Jerry removed by the Tribal Council to avoid implicating the casino in a drug scandal. Barb is furious: "I told them we'd help them!...He was my friend..."

Dr. Roquet calls Nicki to tell her he was wrong about his diagnosis and that in fact, she's pregnant - as JJ watches. He asks her to come by for some tests. When she tells Wanda where she's going, Wanda struggles to speak.

Marilyn comes to Bill's house, having learned he's a polygamist from Tommy and Jerry Flute. "You are going to face a shit storm," she warns. "At least my sins are my own, I don't use God to justify them."

Wanda comes to Bill and tells him what JJ is doing: "He collects our eggs and plants them...he fools us and steals them." She reveals the truth behind Adaleen's pregnancy: "He put me and him inside her!" and warns him that JJ's got Nicki.

At JJ's clinic, Adaleen breaks free of Malinda. As JJ is about to inseminate Nicki with Cara Lynn's egg and his sperm, Adaleen stabs him - just as Bill bursts in to rescue Nicki. Later that night Adaleen sets the house aflame with JJ and Malinda tied up inside.

Back at the house, Bill gets the news that he's won the election. Confronting Barb's doubts, Bill insists he has a testimony to save polygamy. "I've needed you for twenty years," she replies. "I don't think I need you anymore."

On the steps of the state capitol, Bill announces to the crowd that he is a polygamist and invites his wives up on stage: Nicolette Grant, Margene Heffman and Barbara Henrickson. After a long pause Barb rises and joins Nicki and Margene. As he vows to fight abuses, Bill stands with his wives as cameras flash.