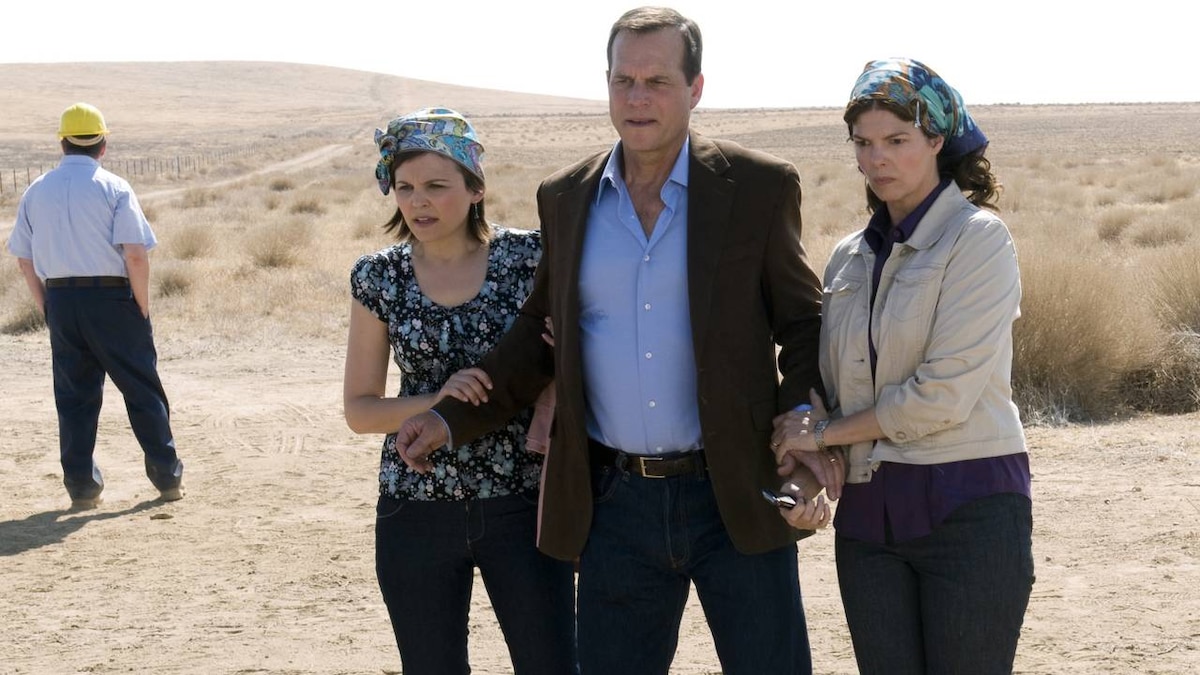 Bill is building his new church with his family and (what's left of) Don's, while the Henricksons prepare for the casino opening. Their casino partners, Jerry Flute and his son Tommy, are not pleased that they are under scrutiny by the Feds because of their business relationship with Bill - apparently he's not "the sunny face of polygamy" after all. Bill insists he's clean (and goes to Ray at the DA's office to demand he back off his investigation of his family.) When he tries to go over his head to State Senator Hayes, Bill learns Hayes died suddenly.

The Feds raid Juniper Creek in search of Roman Grant who's been missing for six weeks. They also confront Nicki when they discover "Roman" has been depositing checks into an account in her name, raising the Henricksons' suspicions about her once again. "I'm not blind. I see it in your eyes," Nicki says. Frustrated with Barb, Margene and Bill's lingering doubts, she throws herself into the task of assimilating her estranged daughter Cara Lynn into the family.

Barb is stretched between her increased role at the casino and concerns about her family - most urgently where Sara and Scott will decide to be married. Meanwhile, Bill and Barb are unaware that Ben is helping his grandmother Lois with her new parrot smuggling business. To get Frank (who is still seeking vengeance for Lois's attempt on his life) off her back, she makes him an offer he can't refuse: "Will you let me live in peace for a percentage of a neat little business I got going?"

Though Margene is "blossoming" she is also feeling the pressure of her home-shopping jewelry business, plus family obligations to home and casino.

Alby meets a traveling businessman in the park while birdwatching and they hook up in the woods. Both are stunned when their paths cross again when Bill introduces them: The businessman (Dale), is actually the attorney who's been assigned to be Trustee of the UEB in Roman's absence. Alby speaks out against the trusteeship, accusing Bill of being the mastermind behind it and the raids. He believes Bill wants to be Prophet. "I have no taste for Prophets," Bill insists.

JJ shows up at Nicki's to fetch Cara Lynn but Nicki insists their daughter stay with her and go to school; she believes JJ is trying to place her in the Joy Book. Bill brokers a deal in which Cara Lynn stays with them during the week and with JJ on the weekends.

Nicki responds to Adaleen's panicked plea for a generator to save the contents of her meat locker when the power goes out, only to discover that her mother has been hiding Roman's frozen body there for the past six weeks. Adaleen insists she found him dead and wanted to protect the Prophet's legacy, there was no foul play on her part. Furious, Nicki demands that Alby announce Roman's death. Instead, Alby and Lura drive him to the desert and dump him in a pit on the casino grounds to cause trouble for Bill. When Bill gets the heads up about the body, he, Barb and Margene try to protect Nicki and are annoyed to discover she already knew her father was dead. Bill runs off with Barb and Margene to deal with an anonymous tip that Roman Grant is at the casino, leaving Nicki behind - who tries to bury Roman herself.

In spite of Alby's attempted sabotage, the casino opening is a success under Barb and Margene's direction - including getting Ben's band to cover for a delayed Kenny Rogers - and Bill and Nicki arrive in time to celebrate the take. Bill leads them in prayer: "Tonight we share a new beginning. Born of struggle, which makes it sweeter still."