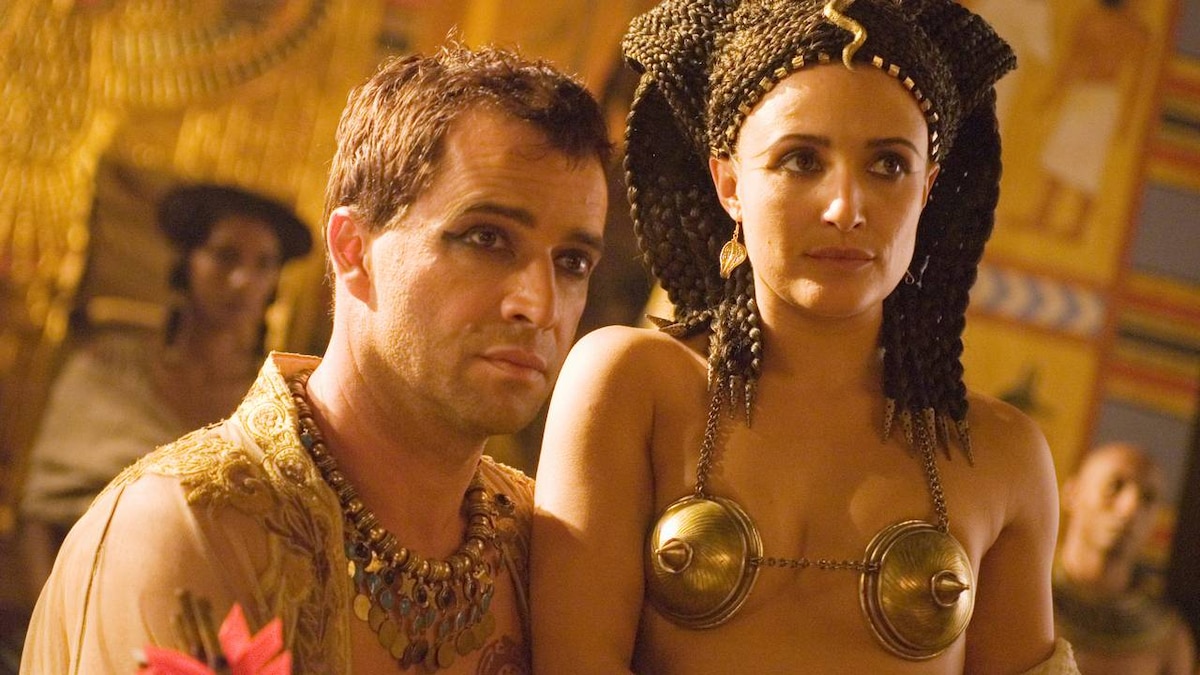 No God Can Stop a Hungry Man

You're no coward, but you do have a strong disease in your soul. A disease that will eat away at you until you die." When asked how he can be so sure, Vorenus replies "I recognize the symptoms, I have the same sickness." Vorenus is awakened from a pleasant dream of being with Niobe by the bald, naked prostitute he has, in actuality, spent the night with. Replacing her black wig, she jolts him back to reality. He is in Alexandria, and he must don his Roman uniform and head back to Cleopatra's castle. Finding Posca who has succumbed to the numbing drugs and dissolute atmosphere, he asks after Antony. 'Where is he? Where indeed?" Posca replies. "His mortal flesh is in the throne room, meeting a deputation from the Senate."

Vorenus finds Antony instructing Cleopatra on the finer points of archery while the Senator Bibulus vies for attention on the matter of Rome's dwindling grain supply. The Senator agrees to triple the price for the grain and Cleopatra demands Carthage as well. When Antony marvels at how desperate Octavian must be to agree, Bibulus responds: "Octavian will do what he must to prevent further suffering." Angered at the implied insult, Antony demands that Spain be thrown into the deal as well. But this Bibulus cannot agree to.

Cleopatra suggests that Antony "Cut the cord" and declare war on Rome. But Antony wants to return "home as a savior not as a conqueror."

Back in Rome at the Aventine Collegium, Pullo reluctantly disentangles himself from Gaia's arms and arises from their bed to address the unruly crowd outside. They are demanding that the granaries be opened. But Pullo urges them to go home and await the next day's rations. As he descends from his pulpit he is greeted by Vorenus's children. He urges them to return inside --"Hungry people will do strange things."

Pullo heads inside himself with Mascius to discuss the situation. As he tosses a bone to the caged Memmio, Gaio chastises him for wasting food, but Pullo insists, "He reminds the other men to stay honest." Seeing no other solution, Pullo orders Gaia to fetch his best clothes so he can bring the matter to Octavian.

Octavian reports to Pullo that the state granaries are empty and the army needs what is in the military silos. Agrippa suggests they send three legions to Africa. "Let Lepidus feed them. That would free up a month of grain for the city." Octavian agrees to the temporary solution, but asks who the people are blaming. "You," Pullo responds honestly.

Octavian, Agrippa and Maecenas discuss the possibility of war against Antony, but Maecenas points out "War on Antony is doomed unless the people are with us." Octavian sends for his mother and sister to dine that evening. Meanwhile back at Atia's villa, Atia watches her granddaughter Antonia playing, and wonders why Antony hasn't yet sent for her, Octavia chastises her mother for holding out such hope.

At dinner, Octavian asks his sister to go to Egypt to talk to Antony about the grain situation. In disbelief, Octavia says it is Atia who should go since "she's his real wife." He bids them both go, and though Atia is eager to, she holds out for a villa in Capri for herself and cash for Octavia.

After some rigorous intercourse, Octavian's wife Livia wants to know why he's sending his mother and sister to Egypt when he knows Antony will refuse his request. She figures out his move: if Antony refuses them, the public will turn against him, and if he still loves Atia and yields to her plea, their grain problem will be solved. "Clever boy."

Caesarion, Cleopatra's son, demands to know about his father from Vorenus. Vorenus provides a description of Pullo, most of which can also be said of Caesar. "Fine horseman. Bad gambler. Though he'd never admit to it. Liked the women. Liked to eat. Eat the table if you'd let him." This last catches the young boy's attention, as he'd heard his father had an abstemious diet. Vorenus is glad to be interrupted by an anxious Posca, who brings news of Atia and Octavia's arrival.

After a rough voyage, Atia and Octavia are left to wait outside the palace while Antony, stoned on opium, struggles to think through his strategy. Cleopatra insists that as long as Antony sends them away, Octavian will be forced to start the war -- which is what Antony wanted. But he knows his public image will be harmed. As they argue over how to handle the visitors, Cleopatra comes up with another plan: kill them. When he refuses Cleopatra becomes enraged, sensing that he still has feelings for Atia.

Finally the doors outside the palace open and Jocasta greets her old friends in her full Egyptian finery, assuring them that "things move ever so slow around here. It's the heat." Posca comes to retrieve his wife, leaving the women waiting once again in the heat, with no explanation.

Meanwhile Antony and Cleopatra's battle turns to lovemaking and in the afterglow, Antony appears to acquiesce to Cleopatra's plan and urges Vorenus to go on a "delicate mission."

Vorenus greets Atia and Octavia, telling them Antony has ordered him to escort them back to the ship. When Atia refuses, Vorenus explains he's been told to use force if necessary. "You tell my husband he's cowardly scum," Octavia orders Vorenus as they depart.

Posca and Jocasta are racing to pack their things to escape on the ship with Atia and Octavian when Vorenus comes upon them. When he agrees to let them go they urge him to join them but he refuses, asking only that if they see Titus Pullo, "ask him to kiss my children for me."

Atia delivers a slap to her son upon her return home. He grants her the villa in Capri that she demanded. But she wants something different now: that he crush Antony. Posca hands over a valuable gift: the last will and testament of Antony and Cleopatra, insisting that the despicable document, when opened, will make the people understand that war against Antony is desirable.

The scroll is unraveled, and the contents of the will quickly disseminated to the people. Antony declares Cleopatra his wife and promises to his children by Cleopatra the Eastern provinces, and to her son by Caesar, Rome and the west. Plus, he pays homage to foreign gods. The people and the Senate are quickly rallied for war.

Octavian, Posca and Pullo meet. Octavian asks Pullo to come with him to battle Antony in Egypt, hoping that Pullo and Vorenus may be able to help broker a peace. In relaying his plans, he explains that Caesarion must die, given what he's been bequeathed in the will. Struck by this news, Pullo agrees to go.

Back at the Aventine Collegium, Pullo breaks the news to Vorenus's children that he will be going to Egypt and may see their father. He gives Vorena the younger and Lucius a kiss from their father. But they refuse to send him one in return, insisting that he killed their mother, an unforgivable act.

Pullo says his goodbyes, ordering the men of the Collegia to stay in line in his absence. That night, Gaia begs him to take her with him but he refuses. Going to fill his flask with vinegar at the Tavern, Pullo notices that the cage is empty just as Memmio attacks him from behind and knocks him out. As Memmio is about to stab an unconscious Pullo, Gaia pounces and kills him, but she is mortally wounded.

As she lays dying, Pullo demands of the gods to know why he is being punished. Gaia makes a deathbed confession of her murder of the pregnant Eirene. Enraged, Pullo strangles the last breath from Gaia and carries her limp body outside, dumping it like a bag of trash in the muddy water.