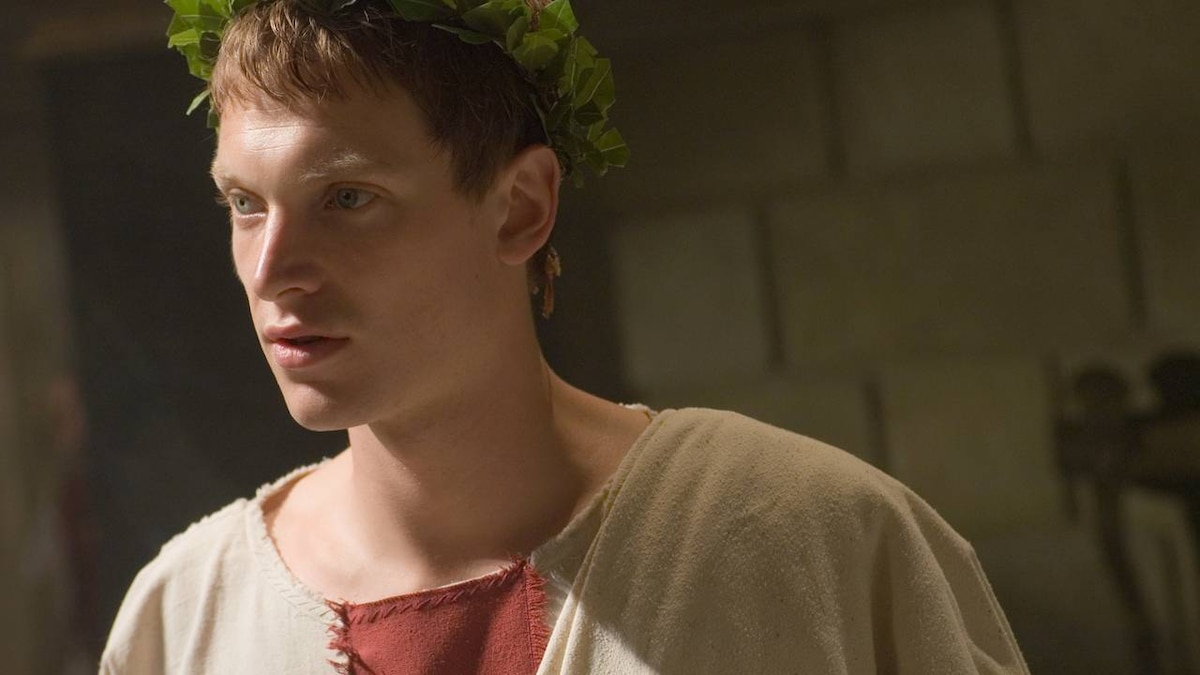 Heroes of the Republic

In a synagogue in the city, Levi and Timon are side by side, deep in ritual prayer. Far north of Rome, in the woods of Cisalpine Gaul, a bearded Mark Antony brings a slaughtered deer to his starving soldiers.

Closer to the city, Vorenus and Pullo steer a horse-drawn wagon, the three kids sleeping in the back. Pullo suggests Vorenus might want to avoid the collegium when they get back, since Mark Antony's orders no longer stand and it's a dangerous place for the kids. But Vorenus insists it's the only place where they can live honestly.

They're interrupted by a roadblock of soldiers from Octavian's army who inform Vorenus and Pullo that 15,000 of them have headed back to Rome with the triumphant new "Caesar". While the men are distracted, Vorena the Younger nudges her sister awake. The older one tells her they can't run off until they get some money.

Back in Rome, Octavian meets with Cicero, who salutes him as a "hero of the Republic" for his victory over Mark Antony. However, Cicero cannot give Octavian the triumph he requests. Cicero states that the victory is not quite complete since Antony is still alive. In fact, he had to send General Lepidus and two legions to finish the job. The Senate leader further warns that the people will not look kindly on such a celebration with Octavian's army at the city walls.

Not to be dissuaded, Octavian suggests another way to celebrate his glory - giving him the Consul's chair. "It's a vanity, I know, but I think I deserve it, and it will please my men." Cicero scoffs - he's too young to be a Senator, much less Consul; he lacks the experience and connections. Agrippa interjects with a reminder about his army, and Cicero reconsiders - on condition that the boy takes his counsel. "I will not utter a word without your advice, your consent," Octavian promises.

On her way to meet her brother after his long absence, Octavia tries to convince her mother to come along, but Atia insists the "ingrate" must come to her.

Back at the Aventine, Vorenus introduces his children to the tavern crowd, informing them that his oldest was prostituted and the boy was fathered by another man. "You will treat them with respect and kindness," he demands. Taking the kids to their new room, he tells them things will be awkward between them at first, but family should be together. "We will not speak of the past," he adds. "Yes, father," Vorena the Elder says coldly.

When Octavia tries to get her brother to make peace with their mother, he's wounded that she's taken her side. "You know what kind of mother she is...She put her lover to beating me!" Octavia chastises him for being "pious" and throwing the family into terrible debt. He tells her he's now Consul of Rome, but she's not impressed. "Why would you invite such trouble?!" she asks. He dismisses her with talk of how busy he is, but she's sure to have the last word: "What a stupid ass you've become!"

Now back in charge of the Aventine, Vorenus tells Mascius that he is third in line behind Pullo. The news doesn't sit so well. They're interrupted by Lyde, dressed in the nun-like garments of a temple acolyte, eager to see the children again. Vorenus warns her she won't be taking the children away from him.

Pullo has his own family problems - Eirene is still upset with him for leaving her in the Aventine with the criminals, while he took off to help Vorenus. "Him you love. Me, no." But Pullo assures her that if they both were drowning in the river, he'd save her first.

At his headquarters, Octavian gets a surprise visit from his mother, who falls to her knees when she sees him, begging his forgiveness. "I have been wicked and cruel. Beat me! Kill me! ...I spit on that pig Antony for leading me astray. I have been a terrible mother..." Octavian appears genuinely moved. "I forgive you," he says quietly, as she breaks into sobs, embracing him. "I can change," she tells him. Octavian doesn't suspect a thing.

Vorenus takes the kids to a shrine, where a priest cleanses them of "dark spirits," smearing the blood of a sacrificed rooster on their faces. Vorenus thanks the gods for returning his family, and promises to "renounce darkness and walk in the path of light."

North of Rome, Mark Antony's men bring him a defeated General Lepidus who is still astonished at how quickly his men deserted to the other side. "I had no idea how popular you were with the rank and file," Lepidus tells his rival. Antony suggests the General was a little too aristocratic; soldiers like "spit and dirt in their leader." Rather than kill him, Antony offers the General the job as his second in command. He accepts, realizing he has no choice.

When Pullo pays a visit to Octavian, the boy inquires about married life. "Strange awkward arrangement, to be thrust up and bound against another so," Octavian says before admitting he's been "looking into" the idea. As for Vorenus, Pullo explains he's under loyal oath to Mark Antony, but will do what's best for the city and keep the peace as before. If Antony came back with full armor, however, Vorenus won't answer for the future.

In the Senate, Cicero presides over Octavian's swearing in. The boy takes center stage with confidence, insisting he will honor his "father" by ushering in an era of moral virtue and dignity. "Rome shall be as it once was - a proud Republic of virtuous women and honest men." The Senators applaud, until he makes his next move. Speaking as "a grieving son," Octavian motions to declare Brutus and Cassius murderers and enemies of the state. A horrified Cicero interrupts to warn him that the unity of the Republic is at stake, but Octavian won't be deterred.

"I've been outmaneuvered by a child," Cicero tells his man Tyro afterward, before dictating a note to Brutus and Cassius.

At the Aventine tavern, the two Vorenas sneak coins from their father's office. Later that night, Gaia offers herself to Vorenus once more, and this time he takes her up on it, telling her to go as soon as they're finished. "F**k you...I'm not a whore," she scoffs, admitting she thought he liked her. "Oh, what a happy couple we'd make," Vorenus says scornfully, before demanding she take his money. Hearing the anger in his voice, she finally gives in.

At a smoky club, a nervous Agrippa watches as scarcely dressed slave girls dance themselves into a frenzy, musicians play instruments, and guests including Maecenas inhale opium bongs. "We are seconds to the Consul now, we should not be in such places," Agrippa tells his deputy before leaving without him. He spots Octavia on his way out, high as a kite with her friend Jocasta. He scoops her up and carries her back to her mother's villa. "You stupid drunken slut!" Atia yells when she learns where her daughter has been. While her brother has been in the Forum "selling piety and virtue to the plebs," she's been off "sucking slave c**k at an orgy!" Octavian will likely banish us both, Atia warns her.

Agrippa swears he'll never tell his commander, and when Atia asks why, he admits his feelings for Octavia with a convincing speech. Turning to Atia, he warns her not to speak to her daughter like that again in his presence.

Hearing the news of Octavian's motion, Brutus sees an opportunity. "He was set to unite the Senate and the people behind him," he tells Cassius. "Now the Senate fears it has created another tyrant." And with Octavian's four legions and Antony's seven, the two are likely to fight each other off for supremacy. "We need only wait and mop up the survivors." They write back to Cicero with their plan.

Vorenus tries to make peace with Memmio and Cotta, claiming he doesn't want his children to live in fear and that the new Consul insists on it. Eyeing him suspiciously, they agree on terms for dividing the spoils. After parting ways, Vorenus tells Pullo the truce will give them time to recruit men and restore order. In the meantime, Memmio and Cotta are already disagreeing how to divide their own shares.

Having hoarded up some money, the girls escape with Lucius and run to see their Aunt Lyde. They can't stay with "that evil man" anymore, they tell her; he killed their mother and cast them into slavery and disgrace. Lyde is sympathetic, but warns them of what will befall them in the streets - thievery and whoring. She urges them to go back, hide their hatred and be obedient. "Your mother wants you to live. Believe me this is your only chance."

With in from Brutus and Cassius, Cicero demands that Octavian his army. The Senate feels he has used them coercively. And since Brutus and Cassius are returning to the city with 20 legions, a war would not be to his advantage. If he disarms now, Cicero might convince them to treat him leniently, given his young age.

Back at Caesar's villa, an anxious Octavian strategizes with Agrippa and Maecenas. Even if Cicero exaggerates, they still need to gather more legions and they're out of cash. Atia interrupts to find her son looking glum.

A few days later, far north of Rome, Mark Antony plots his return to the city in the spring, when the roads are dry. He's interrupted by a surprise visitor: Atia, on a white horse, draped in furs. The two waste no time getting reacquainted, and only after does he ask how she managed to get to him all alone. "I'm not alone," she smiles. He steps outside his tent to find Octavian waiting on horseback, flanked by Agrippa, Maecenas, and a large legion of men. Antony's expression turns cold. The two approach each other silently. Antony holds out his arm and they embrace, solidifying an alliance.

Back in Rome, Pullo and Eirene join Vorenus and his family for a dinner prepared by the children and served by Gaia, who refuses to look at Vorenus, turning her attentions to Pullo instead. Vorena the Elder smiles at her father for the first time, left hand shaped like horns behind her back, cursing him.