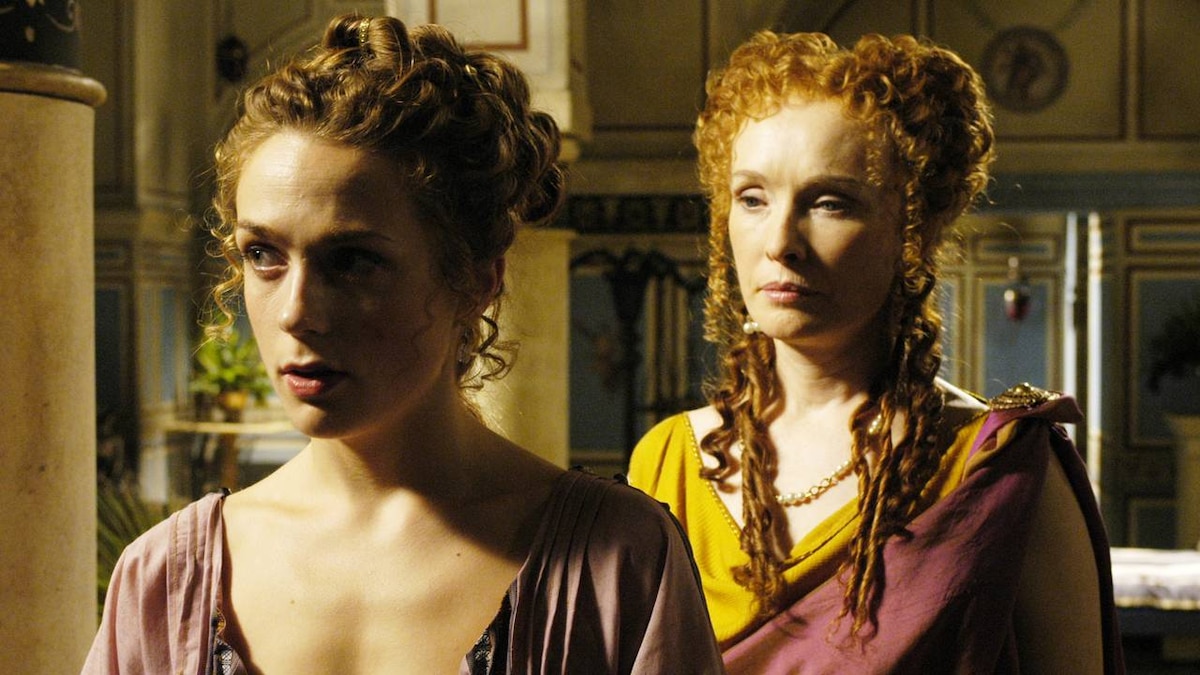 As Caesar waits hopelessly for more of his soldiers to arrive from Italy, Pompey's camp prepares for their attack - and for the spoils of victory. Only Brutus appears apprehensive, conceding that while the Republic must be free of tyrants, he cannot celebrate Caesar's defeat. "He was as my father to me."

For his part, Pompey suggests letting Caesar's cornered army "disintegrate and disappear," but the senators argue for a decisive attack. "You are Pompey Magnus," Scipio intones. "You conquer and crush your enemies like insects. People will be disappointed by anything less." This strikes a chord in the general, and soon his legions are sent to the battlefield outside Caesar's camp.

The storm that sank their ship took most of the 13th Legion with it, and Vorenus and Pullo find themselves washed ashore a small island of sand in the Adriatic, surrounded by the bodies of less fortunate soldiers. "This is where we die," announces a defeated Vorenus, who focuses his remaining energy on scratching a goodbye note to Niobe on a stone. Pullo, optimism in tact, turns his attention towards spearing fish. "I wasn't meant to die here."

Back in Rome, a newsreader announces the tragic fate of the 13th - only Mark Antony's safety has been assured. Upon hearing the news, Atia fears Caesar's inevitable defeat will put her at great risk, and sends Octavia to ask Servilia for protection - she needs her men and her name. When Servilia agrees to this request, Octavia is overcome with gratitude, and falls into a passionate embrace with the older woman.

Across town, Lyde returns to Niobe's, still furious with her sister, refusing an offer for money. But when Niobe tells her Vorenus is likely dead, Lyde softens. "You're all that I have left...I am tired of being angry.

On the battlefield in Greece, Caesar's depleted forces fight desperately and fiercely against Pompey's, despite being outnumbered by as many as five to one. The larger army proves to be its own enemy, however, as one flank of soldiers crash head on into another, sending Pompey's entire army into flight - and Pompey himself retreating to seek reinforcements. Caesar quickly sends word to Rome that he has won the battle, while a stunned and bloodied Pompey regroups with the senators -- only to find they are reconsidering their loyalties. "If I had known what an old fool is Pompey, I would never have left Rome," scoffs Brutus, who decides to surrender to Caesar along with Cicero.

Pompey suggests to his remaining men that they head to Egypt, where he has loyal friends. But they feel it's imprudent to travel together, making it clear they no longer view him as their leader. With this, a defeated Pompey sets out alone with his family and what's left of his army and attendants. In the middle of the night, the soldiers and several slaves steal off with his cart and horse. With only a few slaves left, Pompey makes his way to Egypt, informing his guards to conceal his identity en route.

Recharged from his victory, Caesar welcomes Brutus and Cicero with open arms, dismissing their apologies and talk of surrender. "We have only quarreled a little, and now we are friends again," he tells them. With a gasp, Brutus throws himself into Caesar's arms like a grateful child, apologizing for his betrayal. "It is I am sorry," Caesar responds. "I presented you with an impossible dilemma. You did only what you thought honorable, I'm sure."

Desperate for their survival, Vorenus and Pullo build a raft from the bloated bodies of their comrades, and paddle fiercely out to sea. They eventually collapse from exhaustion and dehydration, and awake to find themselves drifting ashore again - this time greeted by what's left of Pompey's camp. The fallen general tries to pass himself off as a civilian, but they are on to him. "Caesar' ll drown us in gold!" an excited Pullo tells Vorenus, ready to pounce on their prize.

But Pompey makes a heartfelt plea to Vorenus, asking him to consider the fate of his family and let him take them to Egypt. As a stalwart believer in the Republic, Vorenus doesn't have much stomach to watch the once powerful leader beg for mercy. He decides to let him be, infuriating Pullo.

When they finally return to Caesar's camp, Vorenus must inform the general of their encounter, and explain why they failed to bring back the man's archrival. "There was water in his eyes. He is broken. I saw no need to apprehend him."

This explanation only enrages Caesar. "As long as he can be propped on a horse, he is dangerous...I should have you scourged and crucified!"

After pausing to contemplate his punishment, Caesar dismisses the men, much to Mark Antony's disbelief. Recounting the soldiers' many triumphs, he explains, "Those two have powerful Gods on their side. I'll not kill a man with friends of that sort."

Across the shores in Egypt, Pompey and his family arrive safely. They are greeted by a man named Septimius, a former soldier in Pompey's army when he was in Spain. This brings a smile to Pompey's face, as the genial man explains why he's now working for the Egyptians. It's not the Fourth legion of Pompey Magnus's prestigious army, but "a man's got to earn his salt." But as he helps Pompey ashore, Septimius suddenly pulls his sword, and with little warning, thrusts it into Pompey's stomach. Then, with his wife Capurnia and young children watching, the man swings his sword straight for Pompey's neck.