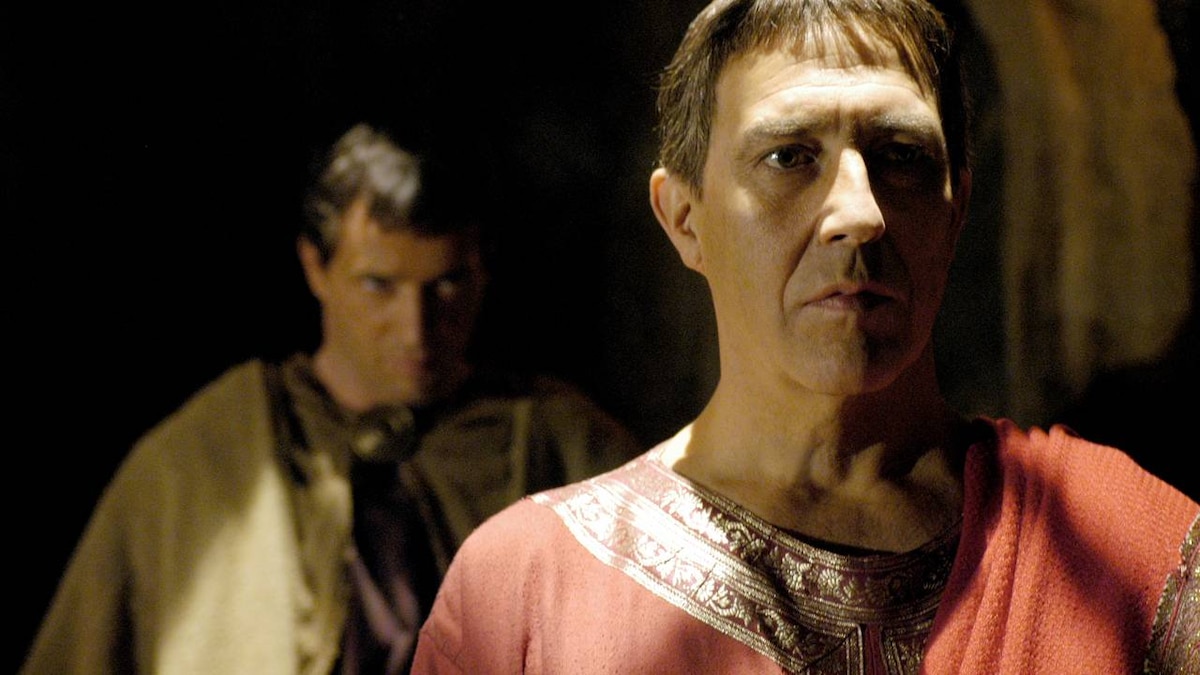 As the senate gathers to sanction Caesar as emperor, Scipio and Brutus put honor aside and stand in support the man they once fought, urging their fellow senators to follow them. "He has shown himself to be as wise and merciful in victory as he is invincible in battle," says Brutus. "Let this be an end to division and civil strife." After a unanimous vote in his favor, Caesar declares the war over and announces five days of feasts and games honoring his 'triumph.'

In the working class neighborhood of Aventine, days before municipal elections are to be held, a nervous Vorenus makes his first campaign speech -- Niobe standing demurely by his side as Posca coaches him from the wings. "The dark times are behind us..." he says to a mostly indifferent crowd, forcing a politician's smile. "Caesar has put an end to patrician tyranny and will ensure that the voice of the common people be heard." With this statement a crowd begins to gather. But when a heckler denounces the rhetoric as 'cac,' an angered Vorenus suddenly seems to embrace his own words. "I wouldn't be standing here on Caesar's slate if I didn't believe, if I didn't know, that Caesar has only the Republic's best interests at heart." Alas, Posca must prompt him to remember his next line.

Atia pays a visit to a fragile Servilia, who appears lost in another dimension since her brutal attack. She declines Atia's invitation to sit with her family during the celebrations, her steely reserve still in tact. She changes the subject to Octavia. "She is staying at a cousin's villa," Atia gloats, "mooning over some young fool of a poet."

In fact, Octavia has taken a self-imposed exile at the Temple of Cybele, where she prays fervently each day and cuts herself with a knife, an offering to 'the Great Mother.' When her brother comes to take her home (her running away reflects badly on the family, he tells her), she steadfastly refuses. "I want to be cleansed of my weakness and filth. I want to be reborn as a pure servant of the Great Mother." After catching a glimpse of her sliced arms, Octavian takes her by force with help from the temple eunuchs.

No longer an enlisted soldier, Pullo becomes enraged when he's told he cannot march with the 13th legion in the celebrations. He heads to the only home he has, the darkened drinking taverns, where a drunken Quintus, son of Pompey, is denouncing Caesar to anyone who will listen. When Quintus staggers his way to Brutus' villa to enlist his support, he instead finds a kindred spirit in Servilia.

To prepare for the elaborate pageantry, Caesar is anointed by Octavian, who paints his uncle's face red with ox blood. For his first ceremony, the new emperor presides over the public execution of his former adversary, the King of Gauls, who has been kept alive--just barely--in the dungeons of the city.

Pullo, with nothing left to lose, makes an appeal to Vorenus to free Eirene; he plans to marry her and start a family in the country. "I love her...I've never been so sure of anything in my life." When Eirene gets the news, she's overjoyed, throwing her arms around her savior and kissing him. Moments later, Niobe's slave Oedipus emerges to thank Pullo himself. "We had thought to take the Vorenus name as our own when we became freed men, but Eirene says it must be under your name that she becomes my wife, so I hope you'll agree."

Barely grasping this news, Pullo flies into a rage, pummeling the young boy against a tree until he is lifeless. With this Vorenus reaches the end of his rope with his friend. "You do this vileness before my children?!" As Eirene shrieks and wails over her dead lover, words between Vorenus and Pullo escalate. "You're a damned fool! The disrespect! The stupidity! I''m a candidate for magistrate, I can't have killings in my yard!"

Pullo cuts Vorenus to the bone. "And here you are, with your nice clean white toga...stays clean no matter how deep you wade in filth... Time was, you said Caesar was a rebel and a traitor. Now today, he tosses you a little coin and some farmland, and he's savior of the Republic." Lost for words in his own defense, Vorenus tries to fight him, but Pullo refuses and leaves.

Across town, Brutus learns that his mother and Quintus have been distributing pamphlets in his name, a "defense of Republican principles against the forces of tyranny." When he tells his mother he might be killed for her act, she does not seem entirely opposed to the idea. "You are looking to your own comfort. I am looking to history," she tells her son, before suggesting he do what his father would have done -- run Caesar out of Rome.

But Brutus won't have any part of her 'insanity.' Instead he goes to Caesar to set the record straight. Having adopted a more imperious tone since his anointment, Caesar tells Brutus he believes him, though he still seems suspicious. "I wonder who it was wrote this," he intones. Brutus shakes his head. "I wish I knew."

Lost in drunken oblivion, Pullo takes refuge in the taverns again, too poor to even encourage the prostitutes. He is approached by Erastes Fulmen, who offers him a job. "I'm a soldier not a murderer," Pullo responds, barely alert. "In times like these Pullo, is there really any difference?" the crime lord responds. Pullo appears to mull his offer before passing out.

In the woods outside Rome, the body of the King of Gauls, rescued from a trash heap in the city, burns atop a bonfire. Dozens of Gauls have gathered for a clandestine ceremony to pay reverence to their fallen chieftain.