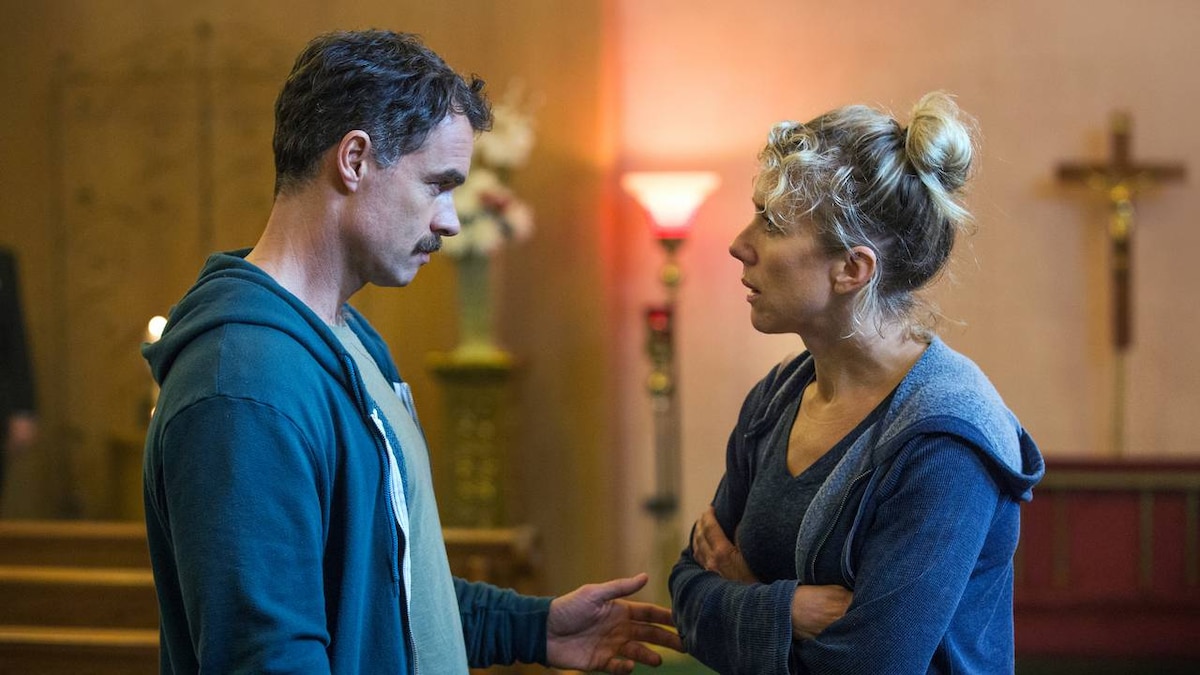 Looking for a Plot

A hungover Patrick complains to Agustín, Dom and Doris about drinking too much tequila at the Halloween party the night before. "I'm really looking forward to the drag queen reenactment of your epic speech," Agustín says. Doris is smitten, texting with Malik and says she's had "like, 17 orgasms in the past five days." Doris next gets a message from her Aunt Sarah. "Oh f**k," she says, looking at the text. "My dad's dead."

Dom and Doris reminisce about their teenage years as he drives home to Modesto. "Even after you told him that you were gay, he still wanted us to get married," Doris remembers. Patrick pops up from the back seat, and Doris thanks him for coming. At a stop along the way, Doris tells stories about her alcoholic mother. Patrick consoles her. "Your childhood," he says, "was definitely worse than mine."

Before checking into the hotel, Dom, Doris and Patrick go to the funeral home. Doris says she doesn't want to see the body, but Dom tells her he regrets not seeing his dad. "Are you making me feel guilty in a funeral home?" she asks. "Thank you -- that's very classy of you." Dom keeps his arm around Doris as she's overcome with emotion upon seeing the corpse. "I hate that f**king suit," Doris says, looking at her father. "Aunt Sarah is too f**king cheap to buy him a new one." Dom lightens the mood with some jokes, and Doris remembers how her dad was a "big fan of the thumbs up." She complains about the amount of makeup on her dad, and Dom says he looks like a drag queen, which makes Doris laugh.

Dom takes Doris and Patrick inside the donut shop that used to be his dad's Portuguese diner. "Should have been able to make it work!" Dom says. Doris laughs, noting that Dom's dad "kept track of the books on napkins."

Aunt Sarah eulogizes her brother George. Of Doris, she says, "When he talked about her, his whole face would light up." When Sarah reads George's favorite poem, "Clear Midnight" by Walt Whitman, Patrick breaks down crying very loudly.

At the reception afterward, Doris hugs her Aunt Sarah, who tells her, "Your dad was a royal pain in my ass, but he was a great brother, and I loved him." Sarah asks after Patrick, and he tells her this was his first funeral. Aunt Sarah whisks Dom away, saying, "Everyone wants to know what he's been doing for the last 20 years." Doris and Patrick take a shot at the bar together, while Dom talks -- and comes out -- to a high school friend, Barry. "Oh wow, cool," Barry replies. "I love that you're gay." Dom wonders why he left Modesto, but Doris and Patrick convince him he's in the right place.

Dom wants to stop by his dad's grave before they leave town, but he can't find the headstone when they get to the cemetery. "My dad's life's work has become a donut shop, and his own son can't find his grave," Dom says. "What kind of a f**king legacy is that?" Dom laments about never coming out to him, so while driving out of the cemetery, Dom yells out the window, "I'm gay! I'm gay, dad! I'm a big homo queer!" At the height of the excitement, with Patrick driving, a truck side-swipes Dom's Volvo.

At the hospital, Dom and Doris wait for Patrick to be treated. Doris tells Dom that her dad left her some money, enough for his chicken window. "I want you to have it," she says. "There's nobody I would rather invest in than you, you know that? Because you're my family." They embrace, and Patrick emerges with his arm in a sling and says, "I'm not going to be able to masturabe for like two weeks." Malik shows up to take them home, and Doris cries uncontrollably.

Patrick arrives at his apartment to find Kevin on his doorstep. "I've left Jon," Kevin says. "I'm completely, f**king in love with you. And I wanna know, do you wanna give this a shot? Just the two of us, together." Patrick's answer is emphatic: "Yes."