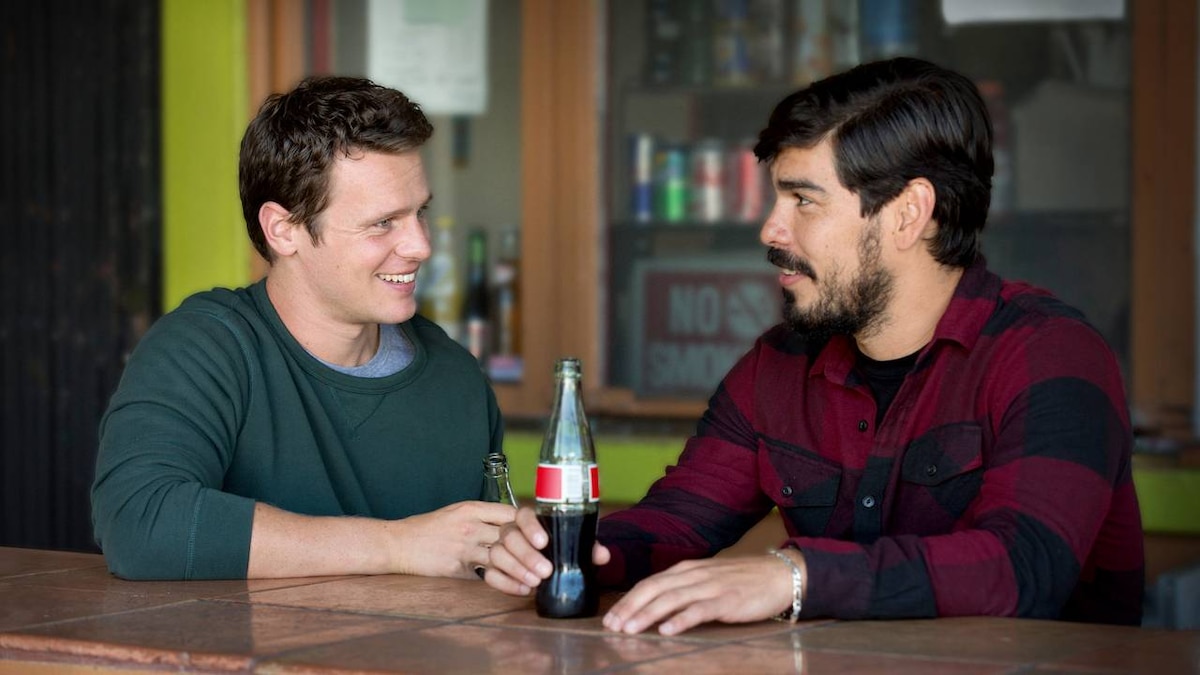 Shortly after Kevin pops a bottle of champagne at a Most Dangerous Games office party, a disgruntled Patrick makes his exit. Kevin catches him on the way out. "How are you not a wreck?" Kevin asks. Patrick offers a clipped reply. "You chose Jon. That's it. End of story. We're both grown-ups -- we don't have to make a big deal about it."

Sitting at his desk, Kevin looks at the Top Trumps deck of cards, throws them in a drawer, and makes a phone call. Jon shows up, and the pair go enjoy the party together.

Agustín visits Eddie, who's sick at his apartment. Eddie won't let him in, and when he finally does, Eddie admits that he's not sick and was taking a mental health day. "I got soup for you," Agustín tells him, "it's got balls in it."

Richie is cautious to label his relationship with Brady "dating," as Patrick updates Richie about his own dating situation, too. "There is no more Kevin," Patrick says. Richie seems pleased. "I didn't like you in that situation," he says, "so I'm glad you ended it." When Patrick and Kevin pick up the truck, Kevin's cousin Ceci insists they stay and have a beer. Ceci isn't shy as they drink. "White guys are the f**king worst," she says. "They walk around like they own everything. I would never date a f**king gringo." A little while later, she pulls Patrick aside. "I was just really rooting for you," she tells him. "I'd never seen him be so into anyone."

Agustín asks Eddie about his HIV status. "Okay, no, see, we're not gonna like sit down and do the Barbara Walters interview thing," Eddie tells him. He eventually relents and reveals he got it from an ex-boyfriend, who lied about his status, and that he still hasn't told his family. Agustín and Eddie start dancing, and Eddie pushes Agustín away when he goes in for a kiss. "You should be embarrassed," Eddie says, "you give up way too easily." They start making out furiously. "This isn't anything official, okay?" Eddie says. "This is just me and you fooling around because I like your dance moves, alright?"

An old friend of Richie's, Hector, stops by as Richie and Patrick wash the ice cream truck. Hector asks how Richie's "salon" business is and laughs when Patrick introduces himself as his ex. "I'm just thinking about your dad," Hector tells Richie. "Live and let live." Richie is angry as Hector leaves, telling Patrick, "That guy's a f**king asshole."

Patrick prods Richie about the situation with his dad. "So this thing with your dad is legit bad, huh?" Richie brushes it off. "It's just complicated." Patrick keeps talking about it, and Richie tells him, "No offense, Patrick, but you don't know shit about my dad." Patrick references his own difficulty with his mother. "I know what it's like to feel like you can't be yourself when you go home," Patrick says, "so you either stay away or you go home and you pretend."

As Patrick drives the truck away from Richie's neighborhood, he apologizes for what happened at the end of their relationship. "I need you to know that it wasn't because I didn't like you enough, and it wasn't because I couldn't imagine us together in the future," he says. "When you asked me if I was ready, it was a complicated night." Patrick admits that he had sex with Kevin just before that, asking Richie, "You're not going to punch me in the face now, are you? Or make me walk home?" Richie is gracious. "It's in the past," he tells Patrick. "I mean, yeah, it doesn't feel great, but you had something with Kevin, right? And I'm with Brady now, and I like him." Patrick and Richie agree to try to be friends.