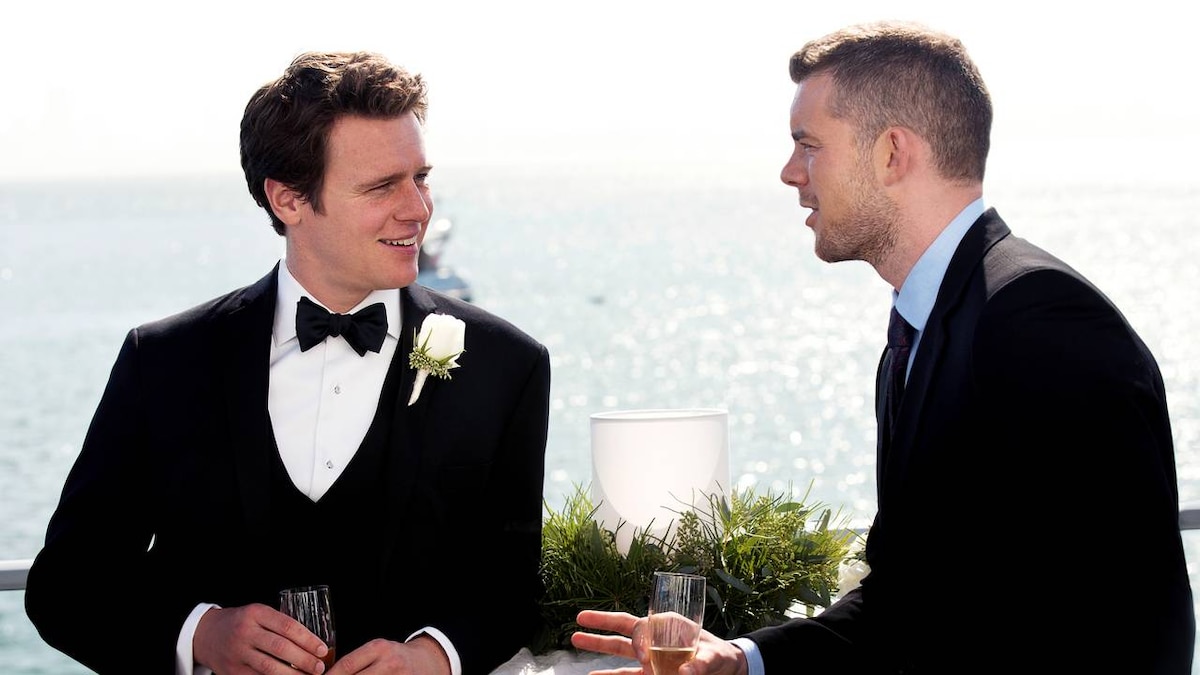 Looking for a Plus-One

Agustín is showing Dom and Patrick the photos he's going to put in his upcoming art show -- photos of Frank and CJ having sex. Patrick is surprised: "This is what you're putting up there?" Upset, Agustín tells them to forget it, insinuating that they're consumed by their own problems; Patrick is worried about attending his sister's wedding with Richie and Dom is stressed about the pop-up restaurant he's planning with Lynn. "We're your friends," Patrick says. "What do you expect us to say?"

Later, Patrick talks to his mom on Skype while getting ready for the wedding. "We're really excited to meet your friend," Patrick's mother Danna tells him. Richie shows up clean-shaven. Patrick is nervous and rushing around, and Richie notes that he says "totally" a lot when he's on edge.

Dom goes to check out Punjab Chinese Restaurant, the space where he'll be holding his pop-up Portuguese restaurant. Doris and Hugo are with him. They have 28 hours to get the place ready to go. "We're gonna need some Swiffers," Doris remarks. As the prep ramps up, Lynn is mostly concerned with cosmetic aspects, like the flowers and painting. "We need to deal with basic kitchen function," Dom tells him. After another disagreement, Dom tells Lynn that he's treating him like a teenager, and Lynn responds by tossing the restaurant keys at him and saying, "Here are the keys to the car, son. Don't stay out too late." Lynn leaves.

Agustín calls Pauline to bow out of the art show. When Frank finds out, he's pissed. "I begged Pauline to let you in," Frank tells him. "You needed help. You were stuck." Agustín fires back. "I don't need you to f*cking save me. I need you to just be there for me." Finally, Agustín confesses that he paid CJ for the sex. "You paid him?" Frank asks. "You paid a whore to f*ck me?" Frank walks off and calls Agustín a "f*cking asshole." Later, Frank tells Agustín that he needs to move out.

En route to the wedding, Richie tries to help Patrick tie his bow-tie and calm his nerves. Richie makes him pull over so he can drive, but first he offers Patrick some weed. "You brought pot to my sister's wedding?" Patrick asks. "To meet my family? What the f*ck are you doing?" Richie is hurt and walks off down the road, telling Patrick to not come after him. At the wedding, Patrick lies to his mom, claiming that Richie couldn't come because of food poisoning. Before the ceremony, Patrick encounters Kevin, whose boyfriend, Jon, is one of his soon-to-be brother-in-law's groomsmen. "I kind of f*cked up," Patrick tells Kevin about why Richie isn't there, "in a big way."

After the ceremony, Patrick leaves an apologetic voicemail for Richie and offers to pick him up. During the reception, Patrick talks to his mother about his relationship and admits that he lied about why Richie isn't there. Patrick tells Danna, "I don't think you'd really like him very much." Patrick undersells Richie to Danna and blames her for why he's not there. "Every guy I've ever been on a date with," Patrick tells her, "I judge him based on what you're gonna think of him." She bristles at first but then replies, "I don't think you can blame me for Richie. If he's not here, that's on you, sweetie." Danna offers Patrick a marshmallow crispy treat with marijuana.

In the bathroom at the wedding, Patrick runs into Kevin, who drunkenly kisses him. Taken aback, Patrick pushes Kevin away, and Kevin stalks off embarrassed. Later, Patrick's father sits down with him in the empty reception hall, complaining about the price tag of the wedding: "You're not gonna want one of these, are you?