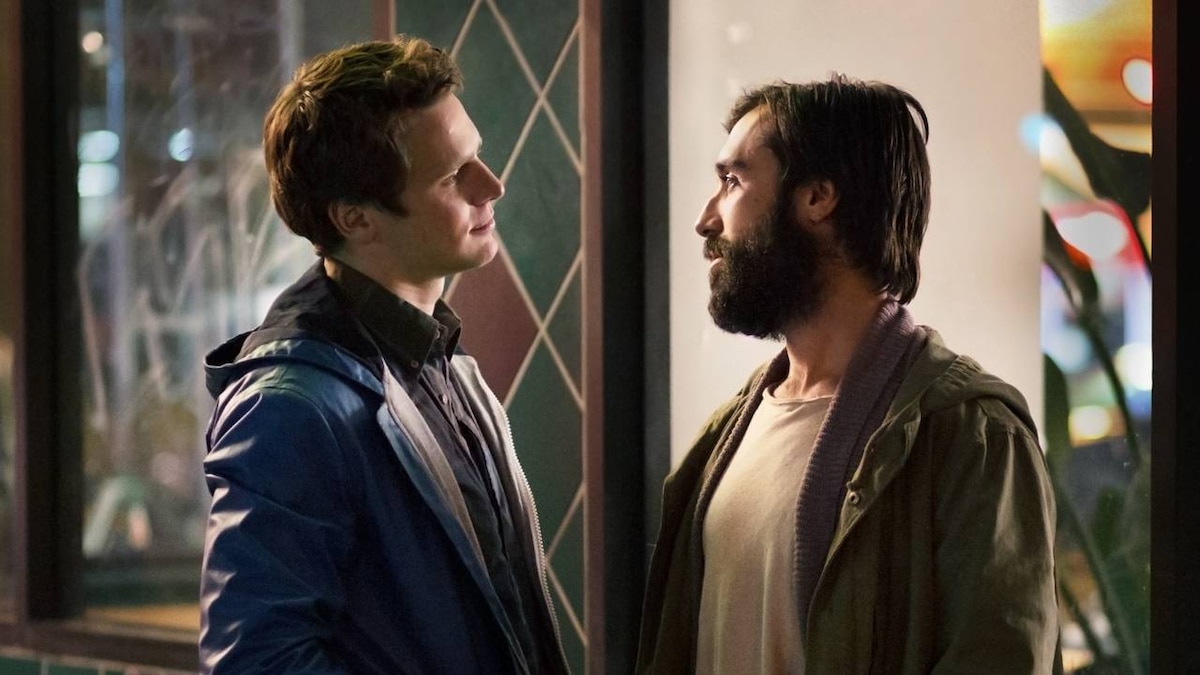 Looking to reconcile after the pre-wedding spat, Patrick goes to Richie's barbershop. Richie rebuffs him: "If I didn't pick up, it's because I don't wanna talk. I need you to give me some space." Before heading back to work, Richie tells a crestfallen Patrick, "I'll call you when I'm ready."

Sulking at Frank's apartment, Agustín takes out a bag of pills. Frank comes home and brushes off Agustín's pleas to reconsider the breakup. "That whole concept you concocted with that little hustler," Frank declares, "it's nothing but the musings of a bored rich kid." He tells Agustín that he'll never be an artist and adds: "Leave the key under the mat."

At Most Dangerous Games, Patrick is eating his lunch by himself on the roof when Kevin approaches. "I just wanna say how totally and utterly embarrassed I am about last night," Kevin says, referring to the drunken kiss in the bathroom. Patrick assures him no apology is necessary, calling the incident "water under the bridge."

Agustín takes one of his mystery pills before meeting Patrick at Dom's pop-up restaurant. "Oh my God, are people giving you spare change?" Patrick asks Agustín, who looks disheveled and is sitting on the curb in front of the restaurant. Agustín explains he is "chemically altered," and the friends go inside for dinner. While eating, Patrick recounts what's going on with Richie. Agustín, clearly in a dark place, suggests, "Maybe it's over?"

Lynn shows up at the restaurant, later than expected, with a handsome friend, and Dom is clearly jealous. Doris approaches Lynn and tells him about how Dom ultimately listened to all of his suggestions, despite their disagreements. She attempts to sell Lynn on Dom, who hasn't been the nicest lately. "Dom's worth it," Doris insists.

Patrick tells Agustín about what's going on with Kevin, and then asks Patrick, "Can I have my old room back?" Even though he has no roommate, Patrick says he'll think about it, just as Kevin calls. Agustín answers and makes Patrick talk to Kevin, who requests he come into the office. Once Patrick arrives, it's quickly apparent that Kevin, with beer in hand, didn't call him in for anything work-related. Kevin confesses: "Do you know how much effort it takes to be around you everyday? It takes all of my willpower not to lunge and kiss the shit out of you, and I can't seem to stop thinking about you, and it's becoming a real, f*cking problem." Kevin kisses Patrick, who doesn't stop him this time. It's not long before Patrick and Kevin are having sex on the floor of the office. Afterward, Patrick asks, "So now what?" Kevin replies honestly: "I don't know, Patrick." While putting his clothes back on, Patrick stops to grab the scapular that Richie gave him.

Dom asks Lynn if they can talk, just as Lynn is about to head out of the pop-up restaurant. Dom apologizes for being an "asshole" the day before, and Lynn replies, "No need." Dom wants to do more pop-ups together. "I just feel like tonight should be the end of our working relationship," Lynn says. Dom goes in for a kiss, and Lynn doesn't resist this time.

Patrick walks home, and he sees Richie on his steps as he approaches. He wants to talk. "I know that I'm extra sensitive about where I'm from, and that's my own thing, and you have your own issues about it," Richie says. Patrick's eyes water. Richie continues: "I think we took things too fast. You rushed everything." They both agree that they like each other, but Richie is unsure about how to move forward if Patrick isn't ready to be in love.

Patrick heads into his apartment, where he finds Agustín sleeping next to his laptop, which is cued up with episodes of ‘The Golden Girls.' Patrick turns on an episode and smiles as he watches next to a sleeping Agustín.