On November 4, 1979, Iranian student activists stormed the U.S. embassy in Tehran, taking over 60 Americans hostage. What was planned as a 48-hour sit-in to protest American imperialism, ballooned into an international crisis and 24/7 media event that would last 444 days. With never-before-seen archival footage and revelatory new interviews with the American hostages and Iranian hostage-takers alike, the series is a gripping chronicle of one of the most dramatic international deadlocks in American history, a deep dive into the geo-political history that led to the crisis, and an exploration of the political fallout that reverberates today.

1.Part One: The Peacock Throne

In the 1970s, the rise of the Ayatollah Khomeini and the explosion of the Iranian Revolution frays the deep ties between Iran and the U.S.

1979. With Iran now under Khomeini’s rule, a 48-hour sit-in at the American embassy in Tehran snowballs into an international crisis. 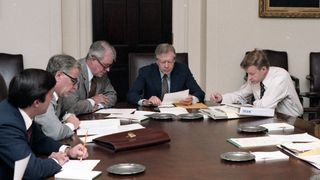 As pressure mounts to resolve the crisis, the Carter administration launches an ill-fated military rescue mission.

A year into the siege, the entrenched stalemate in Iran looms over the 1980 presidential election.