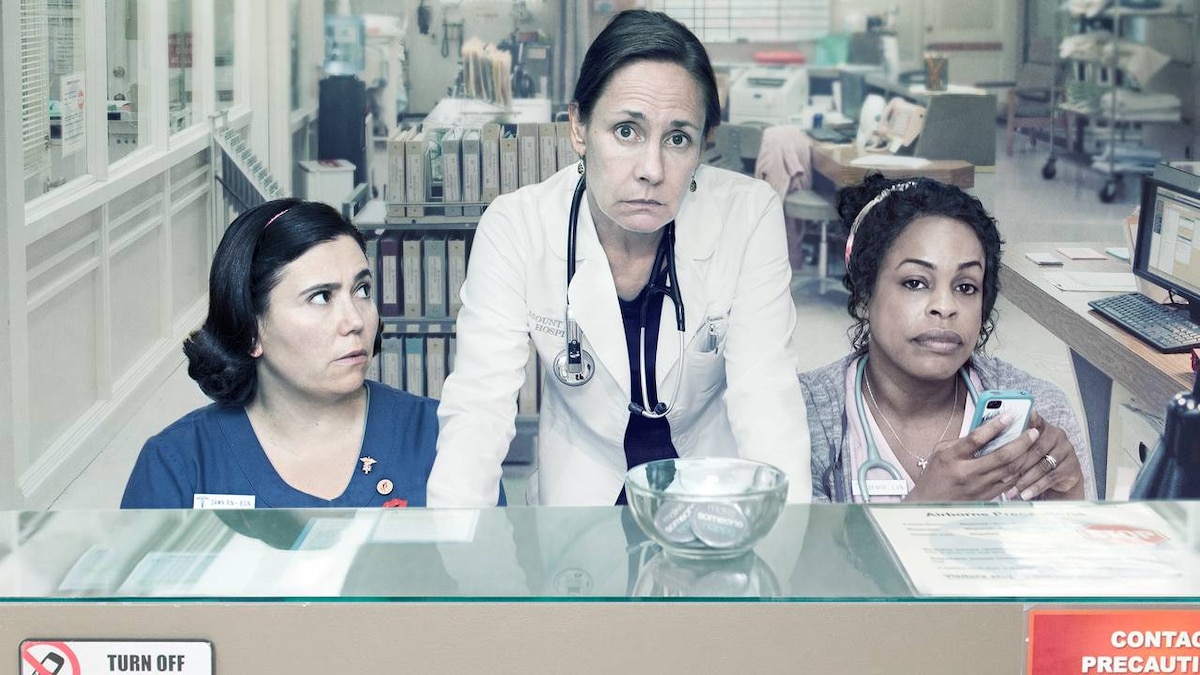 Born On the Fourth of July

At the Billy Barnes Extended Care Unit, Nurse Dawn Forchette sits with a patient, Lillian, as she plays a game on her cell phone. When Dawn looks up, she discovers that Lillian is dead. On Lillian's bed-side table sits a homemade cake celebrating what would have been her 87th birthday.

New nurse Denise "DiDi" Ortley informs Dawn that she found "a turd on a chair in the lounge." Though DiDi offers to clean up the mess with a tissue and some bleach, Dawn explains they have to write an incident report before anything can be done. She reprimands DiDi for not writing a detailed enough report.

While Dr. Jenna James, the head of Geriatrics at the hospital, fills out a death certificate for Lillian, she notes the "fecal deposit" on the lounge chair. She insists Dawn gather it for her ongoing fecal study. She also claims the deceased's bed for a male patient recovering from prostate surgery, even though it's already spoken for in the female-only unit.

Dr. James escorts her "gentlemen" -- a group of residents that includes one woman -- through the ward. She offers bits of wisdom in front of the patients, such as, "Know your population. In Southern California, if it looks like a melanoma it is a melanoma." The group approaches a frenzied woman yelling in an unidentified language. Dawn explains to them that the lady was found wandering along the 405 in her nightgown.

The supervising nurse, Beverly, spots the turd-laden chair, which has been separated and wrapped in caution tape. Dawn sheepishly explains it's being saved for Dr. James' fecal study. Beverly reprimands her for being a kiss-ass and caving to Jenna's ridiculous demands at the risk of patient health.

DiDi takes a call from the language line and since they can't send a translator until the following day, they put the 405 wanderer on speakerphone. The translator says the language is Khmer and that the woman has been shouting, "I can't stand this, I wish I was dead, please kill me."

At the behest of Beverly, orderly Antoine Robertson delivers a new patient for the bed that Dr. James prematurely cleared for her own purposes. When Dr. James arrives with her male patient, Beverly is clearly peeved: "You do not own this floor, Jenna, so you don't get to waltz in here and do your studies for drug companies, or turd companies, or whatever."

Adding insult to injury, Jenna realizes that her fecal sample is gone -- DiDi flushed it on Beverley's orders. Exasperated, Jenna explains that she's attempting to expand the Bristol Stool Chart from seven to 16 types of feces: "It's the 21st f***king century -- does anyone here actually believe that there are only seven categories of stool?" In a tantrum, Dr. James rips off her lab coat and throws it to the floor. A scalpel she confiscated from a resident earlier in the day also drops to the floor.

Confined to an office by a guard, Jenna gets a gentle lecture from Dr. Paul Stickley about threatening the staff with a scalpel. Jenna plays down the incident, but she agrees with him that she could have put the scalpel back in her pocket "in a more direct fashion." To mitigate the situation, he moves her to the Extended Care Unit full-time.

Later that evening, Dawn delivers the sad news of Lillian's passing to the old woman's sister, Sandy. When Sandy inquires about whether her sister asked about her before death, Dawn lies and tells her that Lillian said she loved her very much. While talking with Sandy, Dawn receives a curt goodbye from Beverly, who's been transferred to the Hormone Center by Dr. James.

1.Born On the Fourth of July

Dr. Jenna James (Laurie Metcalf) gets reassigned to the extended-care unit of a CA hospital after a public meltdown.

2.If You're Going to San Francisco

A new supervising nurse, Patsy, arrives at Billy Barnes just in time to have his preconceptions shattered.

Patsy files a grievance against DiDi; a gentleman caller sends shock waves through the ward.

A placid night shift is turned upside down by a new patient and some familiar drunken visitors.