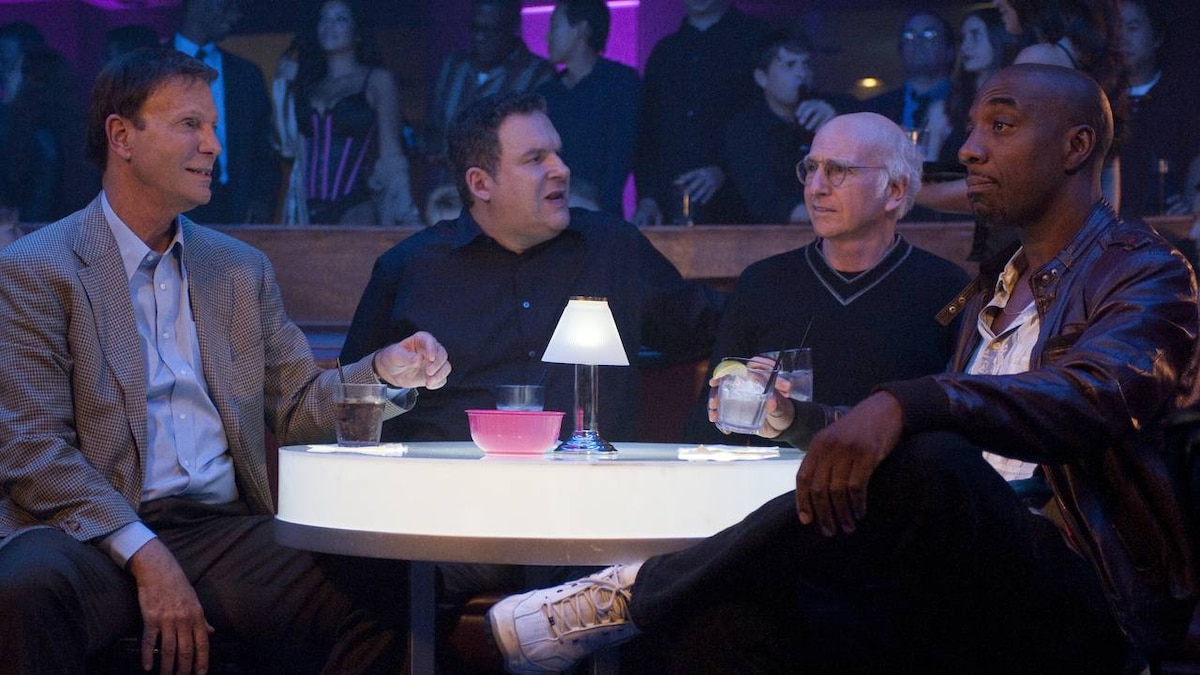 In the grocery store, Larry's path to the chubby hubby ice cream is blocked by a grieving woman being comforted by her friend. He feigns sympathy and tries to reach around the side and, in the process, falls into the freezer. At lunch with Jeff and Larry, Funkhauser discusses Lewis's girlfriend-a burlesque dancer with amazing breasts. They go watch her dance and Lewis catches them in the parking lot. The next day at lunch, Larry tells her and Lewis his "breast-vision" noticed she had a small mole.

In a restaurant, a white man asks Larry to watch his computer. After waiting awhile for him to return, Larry leaves it with a black man nearby. The next day, Larry realizes that the black man never returned the laptop, and Leon is deeply disappointed.

Larry catches a woman letting her dog go on his lawn and berates her. Later, another woman knocks on his door and informs him that she runs a safe house for battered women nearby-her group includes both the woman with the dog and the one who'd been standing in front of the chubby hubby. To make amends, he agrees to go speak to them. His apology goes increasingly awry-he wonders aloud whether Dale, a larger woman, is "the capo that runs the show"-but makes up for it by allowing the women to do laundry in his house.

Lewis's girlfriend has her mole checked and, while it's benign, decides she wants to have her breasts reduced. Lewis is outraged, but plans to take her out for one great last stand, which Larry dubs "a breast blowout."

Watching Dale do laundry, Larry insinuates that she could probably take care of herself, and Larry ends up in the hospital. The doctor takes his statement, and recognizes Leon acting abusively towards Larry. When the police come to Larry's house to take Leon away, they instead nab the black man from the restaurant, who had come to return the computer.

At the grocery store, Dale is standing between Lewis and the freezer. When he's informed that she's from a battered women's shelter, he also tells her she could probably take care of herself. She crushes his hands in the freezer door. With his hands broken, Lewis is unable to partake in the breast blowout.

Larry becomes an unlikely role model for battered women; Richard Lewis's relationship with a burlesque performer is put to the test.

Larry plays 'social assassin' to the hilt at a dinner party, on the golf course, and at a Palestinian restaurant with chicken to die for.

A failed alibi has coastal consequences; the Greenes' dog is denied a last meal; Larry confronts a buffet-line transgressor.

Larry plays the hero in the sky and underground; Jeff's courtship of Ricky Gervais is sabotaged by a nosy waiter.

Larry competes with Rosie O'Donnell for the same woman, explores the nuances of Japanese bows, and refuses lunch with an L.A. acquaintance.

An ice-cream truck triggers a painful childhood memory for Larry that has a huge impact.