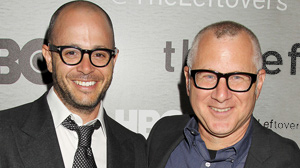 Is there a way for fans to understand what's going on with Holy Wayne?

The Holy Wayne that we're presenting in the show is slightly different than that of the book. I think we should be asking questions like: "What does the world at large know about Holy Wayne?" Or "Is he just another dude with a ranch and a plan?" I will say that the beginning of the second episode does give us some very necessary context about who this guy is and what he thinks that he can do. One of the things that really interests us as storytellers, in the wake of an event like the Departure, is the rise of prophets. You wouldn't be able to tell the real ones from the fake ones. The Guilty Remnant, in their own way, is similar. They're not necessarily a prophet-based cult or religion, but they're following this woman, Patti Levin, who's telling them what to do. She's like, "You're not allowed to talk, but I'm allowed to talk. And we're gonna smoke cigarettes." But you don't know if she answers to anyone, if there are other Guilty Remnant chapters out there.

The premiere is loaded with details like the Chef Anomaly and the Brandenburg Carousel. Do you want fans to try to figure out the meaning of those things?

Another mysterious character, at this point, is the man with the rifle and truck. What's going on with him?

He's purposefully both mysterious and completely and totally unmysterious. The show wants to present him as just a wandering stranger who's taken it upon himself to rid the town of a very real problem, which on one level, is feral dogs. But there also seems to be some sort of existential purpose behind him.

Speaking of Kevin's struggle, how would you define it?

To me, Kevin is somebody who's trying to guard and uphold the social order that exists, which is under threat. So there's that overt mission. The subterranean mission is whether he's going to go crazy doing it because the stresses on him are enormous. Can Kevin preserve the order of the town and remain sane while doing it are the through lines of the show.

Do you want people to try to figure out what caused the Sudden Departure?

I can't deny that the hook of the book is the idea that this huge event occurred. But the story that we're telling doesn't seem to feature anyone trying to figure that out. It's not that they don't care. It would be the same as you or I saying, "We are going to find out what happens when you die. That's what we're going to commit the rest of our lives to." I can tell you right now that if you and I put together a team of the greatest scientists in the world, the greatest religious experts in the world, and the greatest mediums in the world, when you and I reached the moment of our death, we would still not be sure 100 percent that we had come to that conclusion.