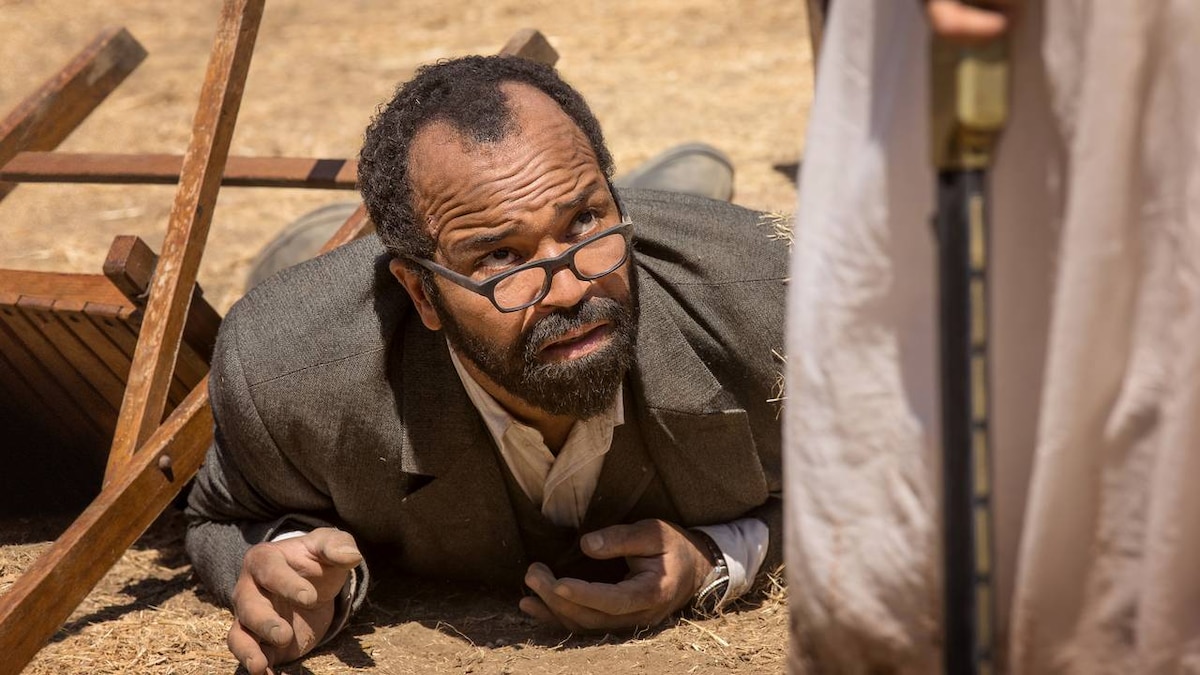 Nicholas approaches a mysterious woman sitting at a table outside a mansion in The Raj — a Delos park based on British Colonial India. They discuss a shared passion for hunting. The exchange brings them back to the Woman's room. Wanting to have sex but sensing Nicholas may be a host, she proposes a method to prove his humanity and loads a revolver: "Simplest way to know for sure." She fires, Nicholas falls to the ground, but the bullet doesn't kill him: he's human. Appeased, they have sex.

Later, at a campsite, the Woman notices something is off: hosts are off their normal loops. She and Nicholas search the camp and find two dead guests. A host holds them at gunpoint: "These violent delights have violent ends." Nicholas attempts to intervene, but the host kills him with a single shot. The Woman grabs a gun and flees. A Bengal tiger emerges from the jungle and chases her to the park boundary — the edge of a bluff overlooking a large lake. The tiger charges at the Woman as she fumbles to load her revolver. She gets one shot in, just as the animal tackles her off the cliff.

The Woman wakes up on the shore of a river in Westworld, washed up at the spot where the Delos PMCs will find the dead tiger lying beside her eleven days later. Momentarily relieved to be alive, she's cornered by a group of Ghost Nation warriors and captured.

Karl Strand, Bernard, and the Delos PMCs walk along train tracks leading to the Mesa. Maling reports that systems are down, and bloodshed is rampant: "It's a slaughterhouse in there." The group finds Charlotte Hale inside; she's surprised to see Bernard alive, and suspiciously questions him as to the location of Peter Abernathy.

Flashback to a little over a week earlier: in the park, Hale and Bernard spot Rebus and his gang holding a group of captives — including Peter Abernathy. Hale creates a diversion while Bernard successfully knocks out Rebus and hardwires into the host, adjusting his code. Reprogrammed Rebus returns to the camp and frees the captives, just as a group of Confederados approaches. Bernard and Hale intercept Abernathy, but he reverts to an older, menacing narrative. Abernathy confronts two Confederados; Hale escapes on horseback, but soldiers take Bernard and Abernathy prisoner.

Dolores and her horde, accompanied by Major Craddock's Confederados, arrive at Fort Forlorn Hope. The group is greeted by Colonel Brigham, who is skeptical of Dolores, but she warns that unless they join forces, they will never reach Glory. To prove the point, Clementine presents Brigham with a Delos security gun, and allows him to gun down the QA Responder they captured in the tech outpost. Impressed, Brigham agrees to join forces.

Later that night, Dolores frees her father, who has been a captive of the Confederados. As Dolores comforts Peter, he snaps back into their old narrative; Dolores is pained by memories of the simpler times. Peter starts to glitch: "I need to get to the train." Seeking help, Dolores brings in Bernard. He runs a diagnostic, and determines Peter is wildly unstable and jumping between old roles. Bernard discovers the source of the malfunction — a large encryption key in Abernathy's system, the one that Hale and Lee placed there at the end of Season One. Dolores realizes Delos is using her father to smuggle information out of the park.

The next day, Dolores meets with Colonel Brigham to prepare for battle; he reveals his forces have buried explosive nitro to aid in their defense at her direction. Hale's crew of QA arrive and start firing at Brigham's troops. Dolores, Teddy, and Craddock watch from the top of the fort. As Bernard tries to fix Peter, two QA responders storm in, capturing the glitching host and taking him to Hale. Dolores storms out of the fort to rescue her father, but Hale escapes with Peter in tow. Dolores orders Teddy to split up the horde to find her father.

The battle continues on the ground: Brigham orders his forces to retreat, but Dolores orders the hosts inside to close the gates, double crossing Brigham and leaving Craddock's men for slaughter. At Dolores' command, Angela fires her gun, setting off the nitro — taking out the entire contingent of QA and Craddock's men. Dolores commands Teddy to execute Craddock and watches as Teddy can't bring himself to pull the trigger.

Continuing their journey to find Maeve's daughter, Lee urges Maeve and Hector to move underground. Suddenly, they are ambushed by a group of Ghost Nation warriors; Maeve tries to use her commands on them, with no effect. They flee, and Lee leads them to an elevator where the trio narrowly escapes.

Disoriented and off course, now making their way through a subterranean access tunnel, Lee takes issue with the romance that's developed between Hector and Maeve — he wrote Hector to long only for his lost love Isabella, and Lee's perhaps overly angry that Hector's moved on so quickly. Maeve pries the truth out of him: Lee had an Isabella of his own, who didn't actually die, but left him because his lifestyle "lacked stability." He modeled Hector after himself, or rather a version of the man he always wanted to be.

Sensing danger, Maeve, Hector, and Lee take cover. A QA responder, set ablaze, runs by. Armistice, wielding a flamethrower, approaches and leads the group to a lab where Felix and Sylvester are tied up. Maeve releases them, predicting they could be useful on their mission, and the group boards an elevator that takes them topside.

Once again above ground but still very lost, the crew walks all night through an unfamiliar, snowy landscape. Lee finds a severed head in the snow and recognizes its armor, realizing to his horror where they must now be… He rushes back to the group to warn them, but it's too late — a samurai charges at them from the shadows.