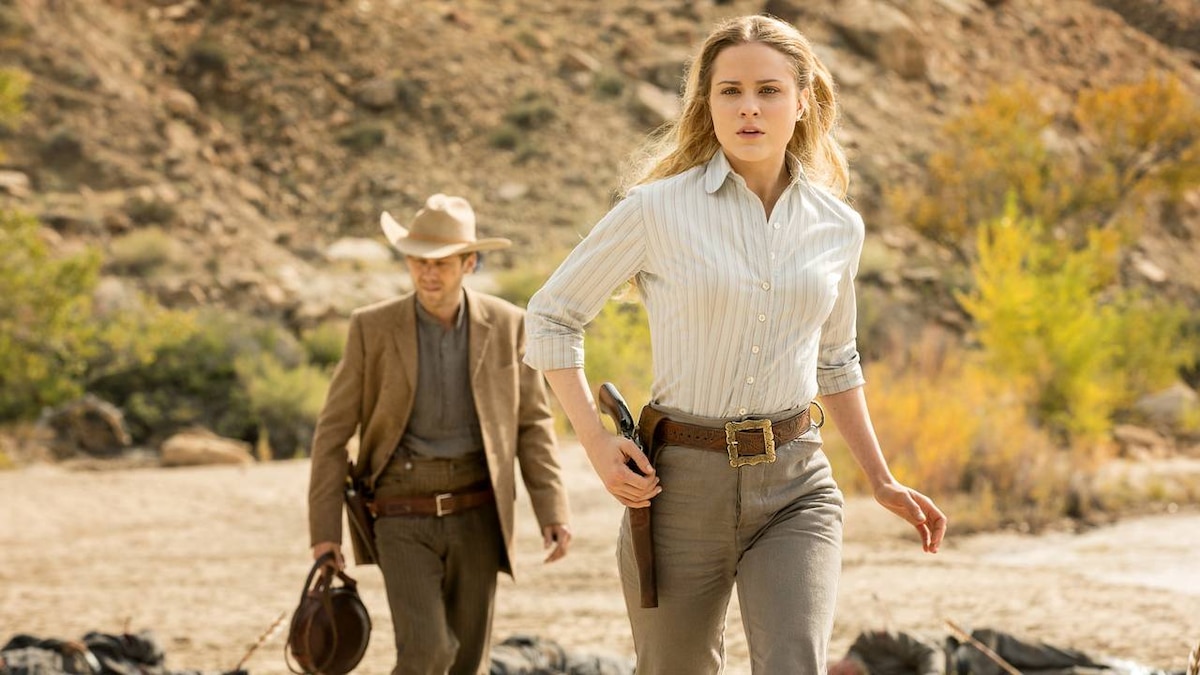 Ford brings Bernard back online; the panicked host can't believe what he's done. Ford explains he created Bernard because human engineers "weren't up to the task" of making lifelike hosts. He instructs Bernard to cover his tracks, and his creation complies.

Maeve meets the new Clementine. She vividly remembers her life with her daughter and once back in Livestock, asks about it. Felix explains she feels as if she's reliving her memories because they are perfect, not hazy like a human's. Planning an escape, Maeve warns Sylvester she knows about the explosive failsafe hidden in her spine, and demands administrative privileges.

Dolores tells William she feels she's close to home. They come across a dying Confederado soldier on the beach, and Dolores tries to aid him. When she walks away to fill her canteen, she sees herself, dead in the river. She turns around, and both William and the soldier are momentarily gone.

Stubbs, Ford and Hale examine Theresa's body, piecing together what happened. Stubbs tells Ford that Theresa was discovered in the same spot they found the woodcutter, next to a transmitter filled with data. He attributes the death to a slip and fall. Hoping to delay the new narrative, Hale conveys Theresa's concerns about it, but Ford insists her demonstration with Clementine was a QA hoax. He reinstates Bernard.

Concerned about the investigation upstairs, Sylvester tells Maeve she needs to return to the park. Instead, she asks who Arnold is and requests a trip to Behavior for more modification. Speaking privately to Lutz, Sylvester reveals his plan to shut Maeve down.

Teddy and the Man in Black ride in search of Wyatt and the Man's words prompt Teddy to remember their earlier encounter at the ranch. They come across bodies strewn across the ground and find a woman, Angela, still alive. The Man recognizes her as a longtime host, and they learn Wyatt's men killed everyone. A monstrous figure attacks, but the Man subdues him with a rope while Teddy takes him out with an axe. The confrontation stirs another memory for Teddy, who recalls the Man dragging off Dolores. He punches him in the face.

Sylvester and Lutz wheel Maeve to Behavior where she instructs them on how to change her code. Lutz shuts her system down and is told off by Lutz for creating such a mess. Maeve abruptly awakens, terrifying Sylvester; she slits his throat with a scalpel -- her core code has been altered. With Maeve's permission, Lutz stops the bleeding. "Now," she states, "it's time to recruit my army."

Hale interrupts Sizemore as he works with a host and assigns him a special project.

At the Mariposa, Maeve begins to test out her administrative privileges to. The sight of a woman with a young girl provokes memories of the attack on her homestead. In it, Maeve shoots the Man in Black, who is not harmed. Urging her daughter to run, Maeve is stabbed in the stomach. She snaps out of the memory and clears the path for Hector's ambush.

Bernard asks Ford about the specificity of his memories and Ford explains they're what make him lifelike; there are more similarities between hosts and humans than not. Assured he never hurt anyone else, Bernard briefly remembers choking Elsie before Ford wipes his memory of his relationship with Theresa.

Dolores stops the journey: "We're here," she says. "I'm home." She wanders into a town and finds it bustling with action; a lab tech adjusts hosts as they practice dancing in the square. Gunfire erupts and Dolores finds herself standing among dead bodies, slowly realizing another version of her did the killing. She raises the gun to her own head, but William grabs it out of her hand and the bodies disappear. Dolores cries, uncertain of when and why things are happening. Suddenly, she remembers, "This is what Arnold wants." William ushers Dolores away and they are discovered by Union soldiers; Logan among them.

Hale and Sizemore select a host from cold storage to carry out the data: Peter Abernathy.

Stubbs expresses condolences to Bernard about Theresa, but Bernard is adamant that he has misunderstood their relationship. As he leaves, Stubbs asks if he's heard from Elsie.

Teddy asks where the Man in Black took Dolores. "You act like you own this world," he tells the Man, and the Man reveals his own tragic backstory: His wife took the wrong pills and fell asleep in the bath. Believing it was a suicide, his daughter blamed him. To find himself, he came back to the park and killed a homesteader and her daughter: Maeve.

Maeve walks out of the Mariposa followed by Clementine. When shots ring out, Maeve relives her daughter's death, this time, as someone who rises to fight back. She cuts the Man and snaps out of her memory, only to discover she has slashed Clementine in the throat. In her memory, Maeve carries her dead daughter into a field plowed like the maze, and collapses at the center.

Maeve escapes to her room and remembers being in the lab with Ford: She was inconsolable in the aftermath of her daughter's death. Debussy's "Reveries" calmed her down. Ford and Bernard wiped her memory before assigning her a new role as the madam at the Mariposa. Maeve rouses, takes a scalpel from the table, and cuts her own throat. Snapping out of her memory, she is taken from her bedroom by clean-up techs.

After the Man in Black tells his story, Angela tells Teddy to kill him, but Teddy cannot pull the trigger. Angela stabs Teddy in the chest with an arrow. "You've been gone a long while, Theodore," she taunts. "It's time you came back to the fold." Wyatt's men surround the camp.