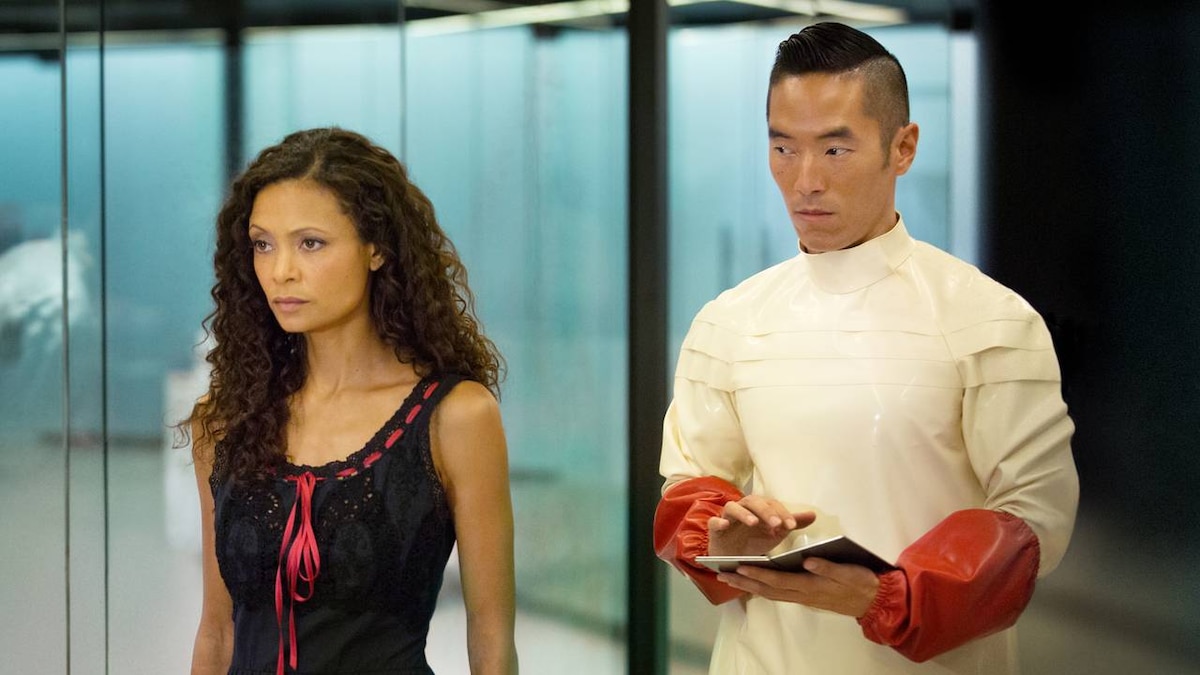 Maeve wakes and walks to the Mariposa as she does every morning. Chatting with Clementine at the bar, she notices a group of newcomers and escorts one upstairs, deliberately taunting him until he chokes her to death. She opens her eyes on Lutz's operating table: "Now then, where were we?"

Elsie and Bernard examine the stray's transmitter and theorize who could be sabotaging the park. The stray, an old model, used a legacy geopositioning system which can only be accessed through older computers. Bernard goes to the basement to see what he can uncover on the older equipment, and discovers a number of hosts in the park.

Dr. Ford and a team of surveyors freeze Las Mudas to prepare for the new narrative. Ford reanimates the hosts before returning to his office. On to something, he flips through an old notebook and lands on a sketch of the maze.

As Teddy and the Man in Black continue to search for the maze, Teddy recounts the myth on which it is based. At the center of the maze is a man who has been killed over and over, and comes back to life. Teddy and The Man pass travelers who warn them of a road closing because of trouble in Pariah. Willing to do anything to find Dolores, Teddy agrees to get his hands a little dirty and find another way across the border.

Lutz explains to Maeve none of her choices are her own. When Maeve questions how he knows he is himself human, the tech responds, simply, "I was born. You were made." He tells her that while her processing power is much stronger than a human's, she can be controlled. Maeve observes her dialogue tree on his tablet; watching it predict her words causes her to glitch and shut down.

Theresa calls Bernard into her office and tells him Ford knows about their relationship – a conflict given how their sectors are meant to keep each other in check. She breaks it off with Bernard.

Lutz frantically presses buttons on the tablet to wake Maeve. As he paces back and forth, she comes to and demands to see more of the facility. Nervously accompanying her through the halls, Lutz shows Maeve how the hosts are brought to life, from manufacturing to behavior and everywhere in between. As Lutz ushers her into the elevator, Maeve is distracted by a park promotional video with glimpses of her previous build and daughter. "How did you have my dreams?" she asks Lutz. Discovering the two of them, Sylvester resolves to turn Lutz in but is stopped by Maeve who threatens him with a scalpel.

Theresa finds Lee Sizemore unwinding at the Mesa Bar, and instructs him to plug Ford's narrative holes. Disgruntled and creatively stunted, Sizemore refuses until Theresa tells him the board will be looking for Ford's replacement if he fails.

Teddy and the Man in Black try to cross the border disguised as Union soldiers but Teddy is recognized. The soldiers remember Teddy and Wyatt ambushing them at Escalante, and take him and The Man. When they try to brand him with the maze, Teddy fights back, and guns down all the soldiers.

Still at the bar, Lee flirts with an attractive guest, inflating his role in the park. He complains about the corporate culture of Delos and mentions that hosts can go off script.

Bernard asks a security tech about activity in Sector 17, but learns it has been closed for future narrative development. Bernard investigates and happens upon Dr. Ford's cabin. He is confronted by the hosts who live there; they do not respond to his commands. Ford enters and redirects the hosts, explaining they are "ghosts of the wreck of time," first-generation hosts built by Arnold himself. Bernard is concerned.

Now drunk as well as disgruntled, Sizemore urinates all over the park map. Theresa interrupts to introduce him to the woman he met at the bar: Charlotte Hale, Executive Director of the Delos Board.

Elsie calls Bernard, telling him the satellite receiving the stray's information belonged to Delos. She goes to an abandoned theater in Sector 3 to investigate a relay which may have been broadcasting to the hosts.

Ford happens upon Robert, the young boy in the park, who leads him to the body of his greyhound. Ford interviews Robert and catches him in a lie about the dog's death. The boy admits he killed the dog on Arnold's command.

Entering the abandoned theater, Elsie discovers the hidden relay. She sifts through its information and discovers Theresa is the saboteur. She calls Bernard, who is with Theresa, to tell him, noting that someone else has been using the system to retask hosts. As Elsie transfers the discovered data, she hears a noise and is grabbed from behind.

Lutz alters Maeve's attributes at her direction; he and Sylvester notice someone already made changes in an unlogged session. Maeve asks that her bulk apperception be increased to the highest level. "Dear boys," she teases, "We're going to have some fun, aren't we?"