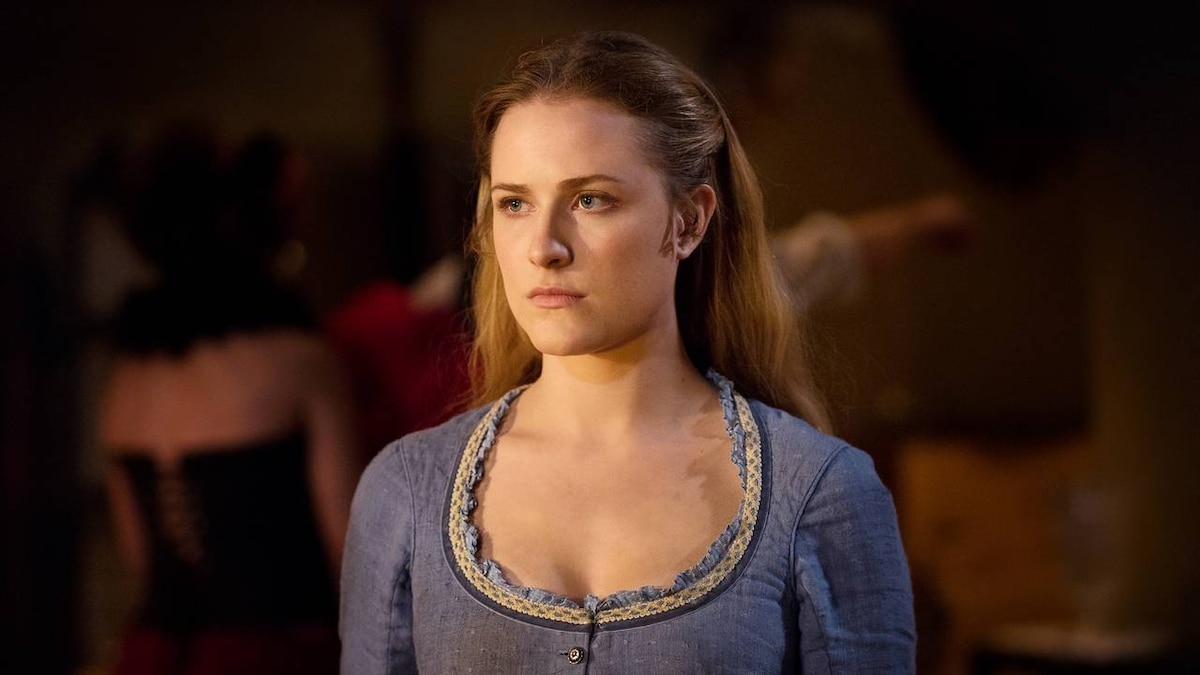 Dr. Ford tells Old Bill the story of his childhood greyhound; when it was let off-leash one day at the park, it killed a cat, mistaking it for the rabbit plush used in training races. "That dog had spent its whole life trying to catch that thing," Ford explains. "Now it had no idea what to do."

"Find me," Arnold's voice beckons to Dolores as she stands on the outskirts of Pariah with William and Logan. Logan tells William the depraved Pariah is different than the rest of the park. He reveals his corporation's interest in buying the park, and provides some rumored historical context: "This place was all started by a partnership, and right before the park opened, one of the partners killed himself."

A rowdy group passes through Pariah, and Logan explains they are the "Confederados," Confederate soldiers who refused to surrender after the war, now working as mercenaries below the border. He thinks they might be his key to reaching the end of the park.

The Man in Black hoists a near-dead Teddy off his horse and leans him up against a tree. "There's a path for everyone. Your path leads you back to me," he quotes before asking Lawrence if he wonders why he keeps him along. The Man slits Lawrence's throat, and hangs him upside down, collecting the blood.

Investigating Maeve's knife wound, Lutz and Sylvester note the incision was contained, "almost like they were looking for something." Sylvester goes on break and Lutz checks the cabinet, where he has hidden a small bird host.

Teddy comes to after receiving a transfusion of Lawrence's blood. The Man in Black tells him he remembers how beautiful the hosts were before they were made biologically lifelike. The Man tells Teddy that Dolores is in danger, giving him renewed purpose and triggering his drive to follow the Man on his quest to find Wyatt.

Dolores walks with William through Pariah and tells him she wants to change her life. When William responds that's what likely draws people to the park, Dolores is confused by his mention of "the real world." A parade passes by and Logan ushers William toward a brothel, deliberately dismissing Dolores. Spotting herself among the revelers, she tries to follow before collapsing in the middle of the parade.

Dolores wakes in a diagnostic with Ford who presses her about her memories of the past and Arnold. Squeezing her hand tightly, Ford puts Dolores in analysis mode and asks when she last had contact with Arnold. "Last contact 34 years, 42 days, 7 hours ago," she says; his last day alive. Ford makes it clear to Dolores that although they've known each other for years, they aren't exactly "friends." "Don't worry," Dolores says to the empty room after Ford leaves. "I didn't tell him anything."

Lutz's host bird struggles to move on a table, and with a few taps on a tablet, it comes to life. Sylvester walks in and finds Lutz with the stolen bird and equipment, and mocks his colleague's ambition: "You are a butcher." He wheels Maeve in for work, and Lutz is surprised by her quick return.

Desperate to get in with the Confederados, Logan takes William and Dolores to meet with El Lazo, and the group agree to steal nitroglycerine being transported by Union soldiers. Dolores, in new gear, joins William, Logan and Slim as they hold up the wagon. After Logan gets violent and the soldiers retaliate, William kills the Union men to protect Logan and Dolores. Slim is killed in battle, and his body is returned, with the nitro, to El Lazo.

Elsie notices as the woodcutter's body is wheeled to Livestock and follows the gurney. She blackmails a tech into giving her access to his remains and finds a transmitter implanted in his arm. "Someone has been using our hosts to smuggle data outside of the park," she tells Bernard.

Logan, William, and Dolores find themselves in a Pariah brothel with the Confederado captain and El Lazo. Uninterested in continuing, William tells Logan "enough's enough," and unleashes all of Logan's disdain for him. The confrontation gets heated and William notices Dolores is gone.

Wandering through the halls of the brothel, Dolores finds her way to a fortune teller and takes a seat. She looks up and sees herself sitting across the table, and is further disturbed to find a wire sticking out of her arm. She pulls it, ripping her skin. On second glance, the wound is gone. Dolores spots El Lazo pumping the nitro into Slim's corpse, filling the empty bottles with Tequila. She returns to William and at the end of an impassioned plea to escape, they kiss.

Outside, the Confederados realize there is tequila in the nitro bottles and take their anger out on Logan. He pleads for help, but William opts to run off with Dolores. Confronted by angry Confederados, Dolores, unwilling to remain the damsel, shoots them to free William. They encounter El Lazo on the train out of the city, gun drawn, next to a coffin with Slim's nitro-filled corpse. The three lay down their weapons, and more agreeably, El Lazo tells them, "You can call me Lawrence."

The Man in Black and a bedraggled Teddy stop at an inn, and are soon unexpectedly joined by Ford. The Man introduces Ford as Teddy's creator and asks if Wyatt was created to stop him from finding the center of the maze. When The Man threatens Ford with his knife, Teddy grabs the blade, protecting Ford from harm. "Far be it from me to get in the way of a voyage of self-discovery," Ford says as he gets up from the table, giving Teddy a pat on the back and replenished energy to keep going.

Lutz returns to work on his bird, Maeve's lifeless form in the background. As he tinkers with the code, the bird flies around the room and lands on Maeve's outstretched finger: "Hello, Felix," she says. "It's time you and I had a chat."