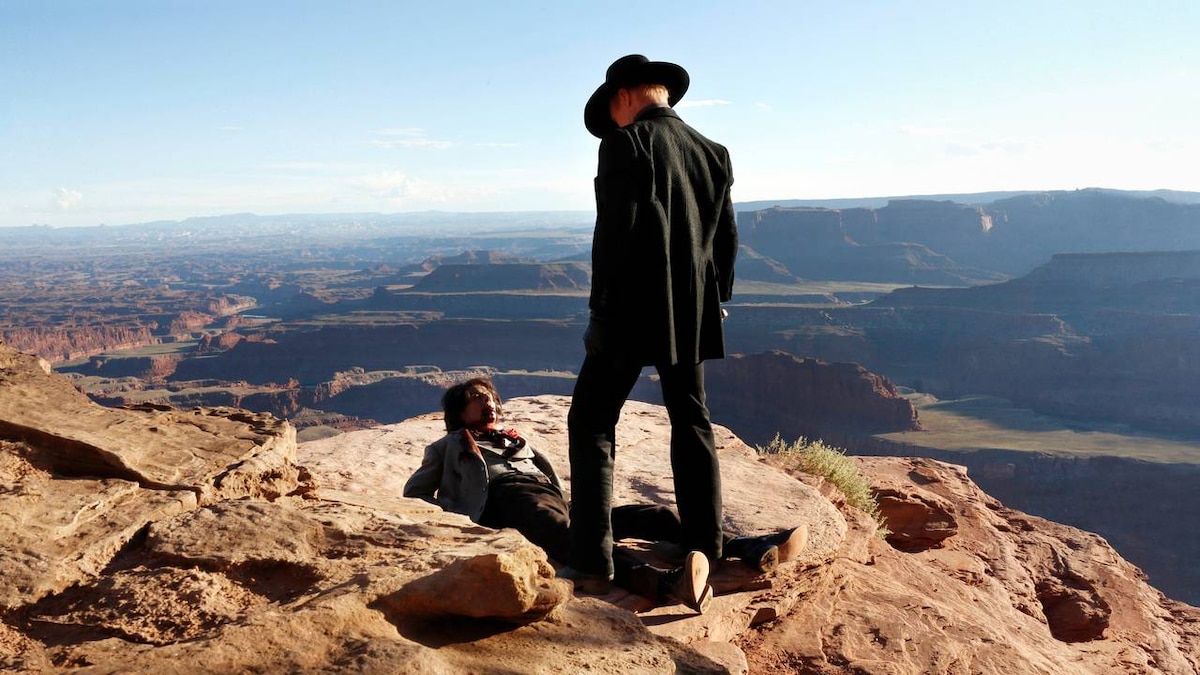 Dolores Abernathy, a blood-spattered young host, sits naked in a diagnostic room. A voice interviews her, and Dolores flatly describes her world as she wakes up on her family's ranch and begins her day.

A gunslinger host, Teddy, arrives in the bustling town of Sweetwater and sidles up to the bar of the Mariposa Saloon. As he exchanges quips with the saloon's quick-witted madam, Maeve, Teddy spots Dolores out the window and picks up a can that falls from her grocery bag. Teddy and Dolores race across the scenic Sweetwater Hills and Dolores is thrilled Teddy has returned, "There's a path for everyone. Your path leads you back to me."

Upon returning to the Abernathy homestead, Teddy and Dolores hear shots. Teddy investigates and discovers Peter Abernathy, Dolores's father, dead. Teddy shoots the bandits but is too late to save Dolores's mother. A mysterious man in black approaches Dolores as she grieves. Greeting her by name, he tells her they've known each other for the past 30 years — implausible to Dolores. Teddy shoots the Man in Black to no effect, confounding the host used to playing the hero. Dragging Dolores off as she screams, the man shoots Teddy in the chest, killing him.

The next morning, Dolores begins her day back in her bed. Teddy rides in on the train again. Both are oblivious to the horror of the previous night. In a state-of-the-art facility, Delos employees construct, refine, and program the beings that populate the park. Armed with tablets, Behavior head, Bernard, and Behavior technician, Elsie, analyze Clementine, one of Maeve's girls. They take note of her "reveries" – a newly programmed gestures to make Clementine more lifelike.

Quality Assurance head Theresa notifies Bernard of an active host in cold storage, where decommissioned hosts are stored. Bernard and Security chief, Stubbs, head down to investigate, encountering a flooded basement filled with naked deactivated hosts lined up in unsettling rows. They watch Park Director Dr. Robert Ford chatting with a host named Old Bill, the source of the disturbance. Ford reminisces about the early days of the park and directs Bill to put himself away.

Dolores and Teddy begin their day again. Teddy spots Dolores but is intercepted by a guest who recognizes him from a previous trip. Dolores drops her can, and this time, the Man in Black picks it up. He hands it to her and tells her he has other plans for tonight, before saddling up to the poker table at the Mariposa.

A guest couple joins the sheriff on a bounty hunt for notorious criminal, Hector Escaton, when the sheriff begins to glitch. Bernard conducts the recalled host's diagnostic and is accosted by a furious Lee Sizemore, the park's head of Narrative, who is concerned pulling the hosts will disrupt his storylines. Bernard ensures Theresa the host's core code is intact, meaning he cannot harm a guest. Slightly reassured, she allows Bernard to run his diagnostic.

A group of bachelors enjoy some of the park's salacious offerings, with Teddy along for the ride. Across the park, Dolores paints by the river and is approached by a family. Engaging with the son, Dolores is perplexed when he asks, "You're one of them, aren't you? You're not real."

Peter Abernathy discovers a photograph in the dirt while tending his herd. Showing Dolores the image of a woman in Times Square, he is confounded by its foreignness. Dolores deflects, "Doesn't look like anything to me."

Sizemore attempts to apologize to Theresa, and admits there never should have been an update. He reveals he knows management has other interests in the park besides fulfilling guests' desires.

Elsie tells Bernard there is a serious problem with one of the hosts and they find Walter, the host who rampaged Abernathy farm, amidst a horrific slaughter not scripted in his narrative. Theresa mandates all updated hosts be recalled, and Bernard briefs Ford with the news.

Kissy, the poker dealer, walks out of the Mariposa, and is seized by the Man in Black who slits his throat. The Man in Black interrogates a near-death Kissy: "There's a deeper level to this game. You're gonna show me how to get there." Unsatisfied with Kissy's response, the man scalps him.

When Dolores wakes up, she discovers her father, still on the porch, staring at the photograph. He glitches and suddenly grabs Dolores and warns her of danger to come. Panicked, Dolores runs to town to find a doctor.

Attempting to fill the narrative holes that will be left by the recalled hosts, Lee informs the team he reworked the narrative so Hector comes to town early. They watch as the action unfolds in the park.

A group of mysterious riders arriving in Sweetwater are revealed to be Hector and his gang. They hold up the Mariposa and gunfire erupts in the street; Teddy gets caught in the crossfire and Hector's men steal the saloon's safe. A guest shoots Hector as he begins a big speech, crushing Sizemore who labored over it. Storyline complete, Elsie cleans up the wreckage and pulls the remaining updated hosts.

Behavior and QA interview all updated hosts; one, Peter Abernathy, is demonstrating abnormal behavior. Ford analyzes Peter, who glitches and recites lines from a previous build. Bernard recognizes the danger in the hosts accessing their memories and realizes, "We're miles beyond a glitch here." Peter is lobotomized and decommissioned to cold storage.

Dolores continues her interview with Stubbs, affirming her core code is intact by promising she would never hurt a living thing. The next morning on the ranch, a fly walks across Dolores's neck, and she swats it without hesitation.