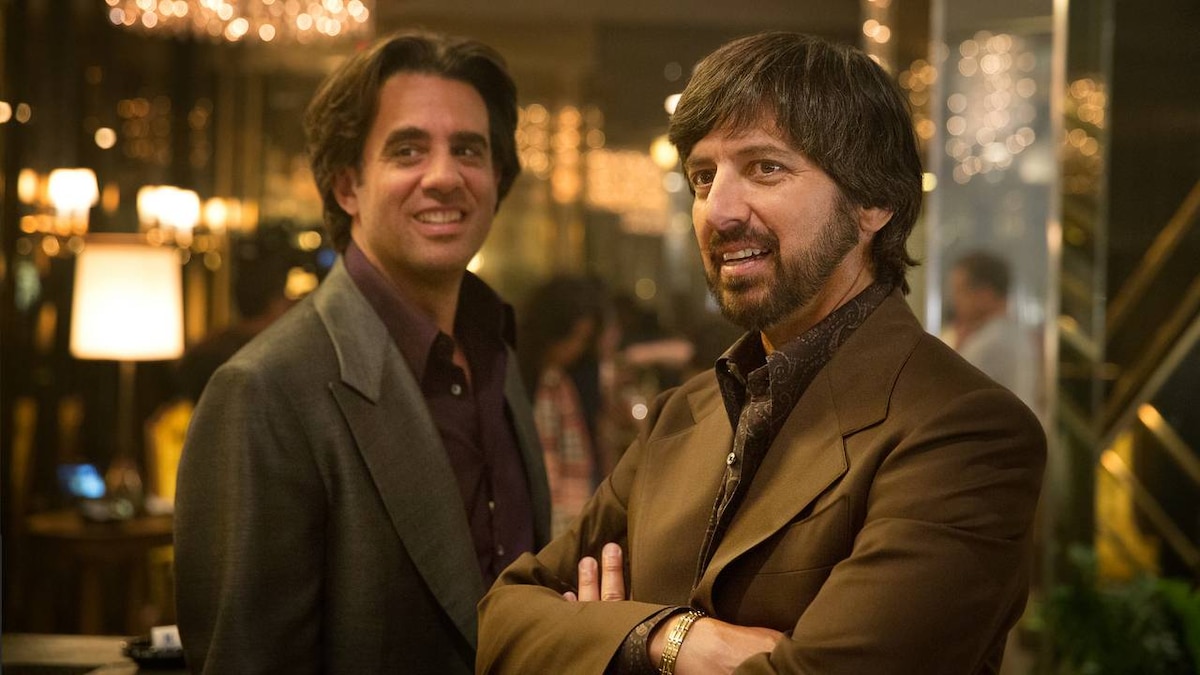 The King and I

To make payroll, Richie and the American Century execs decide to sell their Cessna to Lou Meshejian, another record exec. A newly sober Richie decides to fly out and make the deal himself, using the six hours in the air as an opportunity to clear his head. Zak insists on going, too.

Aboard the plane, Zak and Richie fight about Richie's bad behavior at the Yankovich bat mitzvah, and Zak's inability to believe in Richie's lasting sobriety and trustworthiness. "I trust my wife, naked, in bed with Burt Reynolds before I trust you with a hundred grand in cash," Zak tells Richie, who concedes the point. With the tension broken, Richie finally gives Zak credit for his role in founding ACR. Zak mentions he would like to bring in the lead singer of Karisma, the band at his daughter's bat mitzvah, and have him cut a demo. Richie assents and the two men toast to a better future as Richie's eye catches the number 18 on a bottle of Scotch.

On her way to work, Jamie finds her mother sitting with her Aunt Bellamy. Mrs. Fineman claims Bellamy doesn't want Jamie in her apartment; she'll give her daughter money for an apartment if she finds a more respectable job than the one she has. When Jamie refuses, Mrs. Fineman threatens to pay Bellamy to evict Jamie.

As Zak and Richie "hand over" their jet to Lou in exchange for a suitcase full of cash, Richie notices an 18 on the plane's tail. Lou invites them to a party at his Malibu home, and although Richie and Zak planned to return to New York immediately, Richie decides they need to go and steal half of Lou's roster to protect ACR's reputation.

Zak overhears two record men discussing Elvis' growing unhappiness with RCA, at the party. His manager, Colonel Tom Parker, plans to shop him around after his Vegas stint. Zak relays the news to Richie, and the duo bribe Lou's driver to take them to the airport.

Clark struggles to fit in with the openly hostile mailroom crew. He complains about his backwards career step to Jamie, who advises he show "hustle" and "moxie." She gifts him a packet of weed before going back to work. Later, Clark manages to get himself out of trouble with the mailroom crew when he passes around a joint.

Zak and Richie quietly meet with the Colonel in the lobby of the Las Vegas Hilton. The Colonel has set aside tickets for Elvis' performance that evening; he'll talk to them after the show about what ACR can do for Elvis.

Maury Gold and Corrado Galasso bump into Joe Corso having dinner with a client. Corso loudly and obliviously announces to his dining companion who Galasso is, offending the gangster, and unwittingly tipping off one of the cops investigating Buck Rogers' murder, seated nearby.

Richie meets two young women poolside at the Hilton, and introduces them to Zak, who charms them immediately. They invite the women to the Elvis concert that evening, and one of them offers up a vial of cocaine. Zak partakes, but Richie, taking in the sight of a mother with her two kids, only pretends to take a bump before seeking solace at the bottom of the pool.

Later, the foursome attend the Elvis show, which for Zak, leaves much to be desired. "Why is this happening?" Zak complains to Richie during "Polk Salad Annie." "The King of Rock 'n' Roll is singing about lettuce!" Richie tries to get Zak to calm down, but when he spots the Colonel taking in the spectacle, he gives in to Zak's request to leave early. As they get up, Richie notices their table number: 18.

Taking it as a sign from the universe, the foursome head to a blackjack table where Richie plays 18 with success, over and over again. Completely in the bag, Zak celebrates Richie's continuing luck and tells his old friend that he loves him. Having already netted $5,000, Zak encourages Richie to forget the Colonel; he doesn't want "the headache" of the new Elvis, and believes Richie can win them a million dollars. Not wanting to push his luck, Richie takes his chips and leads the group back to their suite.

Richie rebuffs the attention of one of the women, gently prodding her towards Zak. With his friend otherwise engaged, Richie heads to Elvis' suite to speak with him directly. The two hit it off when Richie pitches him on a return to his earlier, simpler sound, and tells Elvis that he doesn't belong in Vegas. Elvis is ready to call RCA when the Colonel arrives. He asks the singer to show Richie a kung-fu move that leaves Richie flat on his back, staring down the barrel of a gun. The deal unrealized, the Colonel asks a shaken Richie to leave.

Later that night, Richie wakes Zak from a deep sleep. The room is a mess and the women are gone. Zak opens the room safe and discovers the cash from the Cessna sale is missing. Richie is livid Zak's carelessness got them robbed, but his anger quickly abates as he attempts to soothe his sobbing friend.

Flying coach back to New York, Richie offers Zak nothing but compassion and forgiveness for losing their money. Privately, Richie recalls the truth in a series of flashbacks: After leaving Elvis' suite, Richie heard Bobby Darin's "18 Yellow Roses." Believing it to be a sign, he took the $90,000 to the casino and lost it all at a roulette table.

Richie asks a passing flight attendant for a double Smirnoff; the moisture from the two bottles and cocktail straw leaves a damp '18' on his napkin.