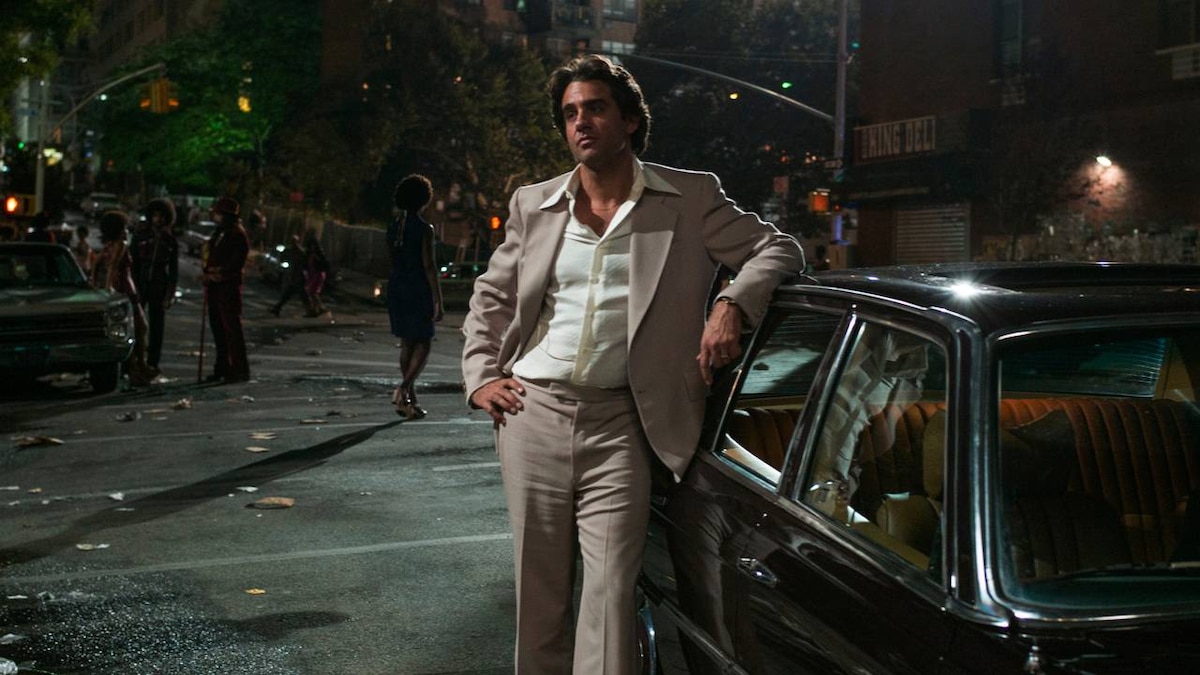 New York City, 1973. Richie Finestra, president of American Century Records, sits in his car in an alleyway, swigging alcohol. Richie buys a quarter ounce of cocaine from a drug dealer, rips down his rearview mirror and cuts the powder with a business card from a homicide detective named Eric Voehel. After snorting a line, Richie dials Voehel's number but never gets a word out -- his car is stampeded by a herd of young people rushing into the Mercer Arts Center. Richie hangs up the phone and follows the crowd inside, where he takes in an edgy performance by the New York Dolls.

Five days earlier, Richie sits at the head of a conference table in a meeting with the German executives of Polygram Records. Joining him are Head of Promotions, Zak Yankovich and Head of Sales, Skip Fontaine. The men are working out a deal in which Polygram buys out American Century. Richie's drug habit and a run of disastrous albums have sunk the label and the now-sober Richie hopes they can dump the company and run. A Polygram exec asks about American Century's pending deal with Led Zeppelin, then tells Richie their attorney will review their balance sheets a final time before signing the deal in New York the following week.

In New York, A&R assistant Jamie Vine picks up a backpack of drugs from her supplier before heading to work. On her way into American Century, she overhears a young punk rocker trying to slip his band's tape to Heather, the receptionist. Jamie steps in and explains that she works for A&R head Julie Silver and promises to pass the tape along. The young man introduces himself as Kip Stevens, and tells Jamie that his band, the Nasty Bits, will be playing a show at The Coventry.

Richie's driver, Leo, picks him up at the airport with news that there's an emergency with Led Zeppelin Richie needs to attend to. Richie approaches Robert Plant backstage at Madison Square Garden and attempts to smooth things over: The band agreed to a 20 percent royalty rate, but discovered the label attempted to it cut in half without their knowing. Richie promises to make things right, but Plant dismisses him. Back in the car, Richie calls Scott Levitt, the label's lawyer, and reams him for messing up the deal. He orders Scott to fix the situation with the band's manager, Peter Grant.

Stuck in standstill traffic trying to get to Connecticut, Richie redirects Leo to his apartment in the Village. They pass through a neighborhood in the South Bronx and Richie tells Leo to pull over when he hears a guy spinning two records for an impromptu dance party outside of an apartment building. His investigation is cut short when a pimp sticks a gun in the window and questions Richie's presence in the neighborhood. Another man recognizes Richie, and while the two don't acknowledge their history, the man gets the pimp to let Richie and Leo go unharmed.

At his apartment, Richie puts on a reel from an old recording session with Lester Grimes. He recalls seeing Grimes -- the man who saved him in the Bronx -- perform at a nightclub where he was a bar back in the early 1960s. He and Richie bonded over music after his set, and Richie became his manager.

The next morning, Richie arrives at his office to find Zak, Scott and Skip already in a meeting with a livid Peter Grant. Grant is outraged that Richie attempted to do business with one of his clients behind his back. Making matters worse, Scott let slip about the Polygram deal and Grant vows to keep Zeppelin's money away from "those Nazi bastards." After Grant storms out, Zak delivers even more bad news: American Century artist Donny Osmond has offended station owner Frank "Buck" Rogers. He's now refusing to play Osmond's new record and is threatening a label-wide boycott. Despite Richie's reluctance, Zak insists they bring in Joe Corso, a well-known (but far from ethical) promotions man to help smooth things over.

Richie heads into an A&R meeting and berates the team for their scattered roster and inability to bring in fresh talent; the industry calls them "American Cemetery: Where Artists Go to Die." Jamie, who's just brought in lunch for the group, reveals that she's listened to a promising demo from a band called the Nasty Bits. Richie praises her initiative.

New York City, 1960. Richie, now Lester Grimes' manager, meets with Maury Gold, the head of Rondelay Records. Gold tells Lester that while he likes the blues, the records don't sell. Richie pitches Lester to cut a couple of successful dance records under the name "Little Jimmy Little," so he can start recording the music he really wants to do. When Lester responds uncertainly, Gold pulls Richie aside and demands he get Lester in line. "Musicians ain't your friends," he tells his protégé. "They're products." A short while later, Lester records "The Cha Cha Twist" as "Little Jimmy Little."

Jamie watches the Nasty Bits perform at The Coventry. The crowd hates the band's raw, unfamiliar sound, and starts chucking beer bottles at the stage. Kip launches himself into the crowd and starts hitting people with his guitar while the rest of the band fights patrons off the stage. Jamie watches the chaos, entranced and excited. Afterwards, Jamie and Kip have sex at his apartment. She tells Kip that he and his band need to be a lot better if they want to get signed, though she recognizes the crowd's visceral reaction to the Bits' sound will be a major selling point. As she prepares to leave, she warns Kip, who's tying himself off, to be careful with heroin.

Richie meets with Buck Rogers and Joe Corso at The Oasis, a sex club. Buck, a major blowhard, details his (meritless) beef with Donny Osmond. Aware a boycott from Buck would spread like cancer, Corso offers Buck some cocaine and asks what he and Richie can do to make things right.

Arriving home, Richie finds his wife Devon on the couch with their sleeping daughter. Richie unloads about his tense day, worrying that Polygram will scrap his label once they realize it's nothing but an empty shell, rendering the last 20 years of his life meaningless. Devon reminds him that he's built a great life from that work, and that he doesn't have to "retire and build model trains" after the sale. Richie doesn't know what to do next, except that he needs a change. Devon agrees she needs one as well.

Following a tense meeting with the Germans in New York, Devon hosts a birthday bash for Richie at their home in Greenwich. An old friend of Devon's, Ingrid, arrives at the party. She tells Devon that she recently saw their mutual friend Andy Warhol, and that the artist asked about her. Devon insists she's happy with her sober suburban life, though she sounds uncertain about her claim. The American Century crew presents Richie with his birthday gift: A 1959 Gretsch Twang Machine, owned by Bo Diddley himself. Richie is forced to leave his own party when he gets a call from Joe Corso; the promoter has been stuck partying with Buck Rogers since their meeting at The Oasis two days ago. Rogers wants to see Richie and Corso won't take no for an answer.

Richie arrives at Buck's home on Long Island, and finds him coked out of his mind. Richie, seeing no value in discussing anything with the incoherent man, attempts to leave several times. When Buck grabs Richie and kisses him on the mouth, a fight breaks out between the two men, and Corso winds up bludgeoning Buck to death with a crystal vase. Despite Corso delivering the final, fatal blows, he insists that Richie had an equal hand in murdering Buck and stops him from calling the cops. He forces Richie into helping him dump Buck's corpse in Brooklyn -- the cops will think it's a drug deal gone wrong, and he and Richie will never hear about it again.

The next day, Jamie talks with Richie about the Nasty Bits' performance at The Coventry, but he's too distracted from the previous night's events to listen. His secretary, Cece, interrupts to tell Richie that a detective, Eric Voehel, dropped by and left his card, asking Richie to call him. Also, Zak, Skip and Scott want to meet with Richie. The men feign seriousness before breaking into smiles -- Polygram agreed to buy them out. The guys pop champagne, but disconsolate Richie excuses himself from the celebration.

New York City, 1964. Richie, now working for Rondelay Records, meets with Lester Grimes. Lester wants Richie to finally make good on his four-year-old promise of letting him sing the blues. Richie explains that the label is in deep because of his boss's gambling debts; however, he plans to meet with Maury's creditors to work out a deal and promises to take Lester with him when he starts his own label. Unfortunately, the move doesn't go as planned. Gangster Corrado Galasso agrees to buy out Richie at half its valuation, but refuses to release Lester from his contract. The following day, Galasso and his goons beat up Lester for refusing to record anything else for Maury, based on his deal with Richie. When Lester attacks Galasso, one of the men pulls him off with a baseball bat to the throat, crushing Lester's windpipe and effectively ending his singing career.

At home, Richie listens to the Nasty Bits demo while watching the news. When he sees that Buck Roger's body has been found, he panics and uncovers a hidden bottle of Scotch, and takes his first drink in years. Devon discovers a drunk Richie a short while later. She's enraged Richie doesn't feel their life together is "enough" and needs to soothe himself with booze. She hands him the bottle and insists he drink more; he does, then offers it to Devon. She takes a mouthful but doesn't swallow -- instead, she spits it in Richie's face before storming out. In a fit of rage, Richie puts his new guitar through their television.

The New York Dolls continue to rock at the Mercer Arts Center while Richie watches in awe. Moments later, he watches a crack ripple through the walls and the venue collapses around him. Richie survives the collapse, and pulls himself -- relatively unscathed-- from the rubble, and walks off into the night.