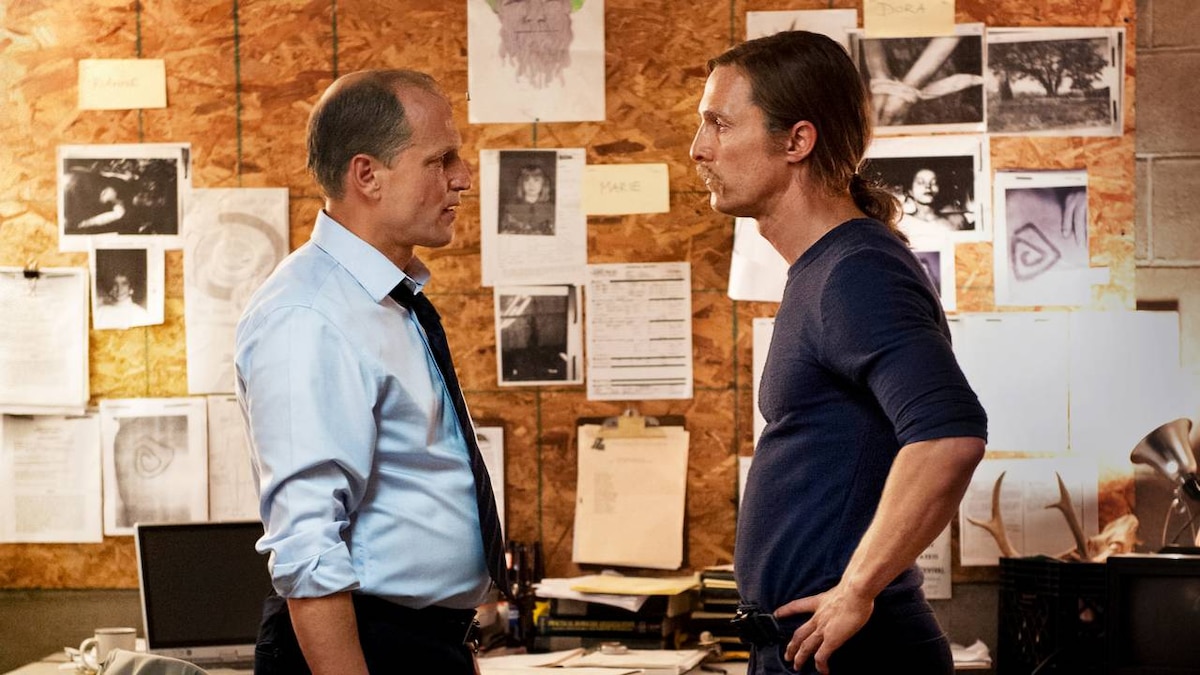 "We left something undone. We got to fix it." - Cohle

Rust Cohle reveals why he asked Marty Hart to have a drink: he believes the murder in Lake Charles has been committed by the same person who killed Dora Lange, and that the former partners didn't get all the suspects when they took down Dewall and Reggie Ledoux in 1995. Cohle believes this person has been responsible for disappearances all over the coast. He confesses he's been working the case on his own since he returned to Louisiana two years ago, and he needs Marty. When Hart refuses to help, Cohle insists that Hart has a debt; he killed Ledoux before they could get answers from him. Marty begrudgingly agrees to see Cohle's storage unit. To Hart's surprise, the locker is overflowing with pictures, maps and research: a testament to Cohle's obsession with the case.

"I decided it all had to be a dream, anyways." - Toby Boelert

Cohle walks Hart through his findings: Multiple women and children have gone missing near schools that were part of Rev. Tuttle's Wellspring Initiative. A Wellsprings preschool attended by Marie Fontenot was accused of child molestation, closed and later reopened as Light of the Way Academy, where Rianne Olivier attended.

Cohle tells Hart he tracked down Rianne's former classmate Toby Boelert in 2010. Now a prostitute, the young man recalled seeing Tuttle around the school. Boelert remembered incidents he assumes were dreams because he couldn't move when they happened. Men in animal masks took pictures and "sometimes other things." None of his classmates spoke of what they'd seen, except for a girl -- Marie Fontenot, whose disappearance Hart and Cohle reviewed in 1995.

Rust tells Marty about an old rural Mardi Gras tradition where participants wear animal masks similar to those in Boelert's story and where they crowned a winter queen who wore antlers. The Tuttles are from that area. Boelert saw the faces of three younger men, and recalls one with scars around his mouth. This is the third reference to a man with facial scars, Cohle reminds Hart; both a member of the revival church and mental patient Kelly Reider described a similar person. Cohle suspects this suspect is the same "green-eared spaghetti monster" mentioned by a young girl years earlier. This scarred man was the third person in collaboration with Dewall and Reggie Ledoux.

"You maybe told yourself this story and kept drinking until you believed it." - Hart

Marty is skeptical of Cohle's theory. Rust admits he doubted himself as well -- until he uncovered evidence from Tuttle's home. In 2010 when the reverend was on his spring ministry tour, Cohle broke into two of Tuttle's houses. Cohle believes Tuttle either killed himself or was killed after the cult group learned what was pilfered. From a safe in Tuttle's Baton Rouge house, Cohle removed photos of girls in a forest wearing antler crowns, as well as a videotape depicting the ritualistic sacrifice of Marie Fontenot. Hart watches a portion of the tape; horrified, he asks, "What can I do to help?" Rust maintains that official channels are polluted because Billy Lee's cousin Edwin Tuttle is now a senator, and currently Cohle is a suspect. Cohle needs Hart to access police records and databases.

"Did you come here to say goodbye?" - Maggie

Marty visits Maggie at her new home where she lives with her second husband. After an update on his daughters, Hart asks what Papania and Gilbough questioned her about. "You and Rust, mostly Rust," Maggie answers, assuring him that she disclosed nothing. She's surprised to learn that Marty has agreed to help his former partner, and some finality in his manner causes her to worry about her ex-husband's safety. Days later, Maggie goes to Cohle's bar to ease her mind. He quickly tells her to leave. "It never sat right with me," Cohle states, "you asking me to lie to you about him."

"Be careful what you get good at." - Cohle

Hart and Cohle move the evidence Rust has amassed to Hart's PI office. The men catch up; they both live quiet, lonely lives. Hart quit the police force after finding the remains of an infant in a microwave. Cohle admits he came back to Louisiana to pay his debt before ending the cycle of violence that's defined his life.

Hart charms an old police buddy to give him access to old case files, claiming he is planning to write a book. The documents lead Hart and Cohle to two new sources. First, the pair meet Jimmy Ledoux, a distant relative of Reggie and Dewall. Jimmy confirms that he met a man with a scarred face as a boy and felt uncomfortable around him. Next, Hart and Cohle question a woman named Delores Jackson who worked for Billy Lee Tuttle's father, Sam. Delores reveals Sam had an extended family and specific taste in women. When asked about a scarred boy, Delores recalls Sam Tuttle's grandchild from another family named Childress. She immediately recognizes the latticework in Cohle's sketches and asks, "You know Carcosa?" The woman's grand-niece escorts the men out, citing Delores' dementia.

Hart digs into the Marie Fontenot case and learns that the deputy who took the original complaint was Steve Geraci. Hart takes Cohle's advice and approaches Geraci -- who is now a sheriff. Hart invites Geraci golfing and brings up the old case. The sheriff provides the same story the detectives heard in 1995: the child went to live with her father. Geraci says the tip came from Sheriff Ted Childress. Convinced that Geraci is withholding, Hart plans another outing, this time on a fishing boat. When Geraci evades questions about the Fontenot case, Cohle confronts him at gunpoint. The two take the sheriff captive.

Detectives Papania and Gilbough drive through unfamiliar landscape looking for the Son of Life Church where Hart and Cohle spoke to a minister years ago. Lost, they pull over to ask directions from a groundskeeper and are impressed with his knowledge of the area. The partners drive off without noticing the scars that cover the man's face.