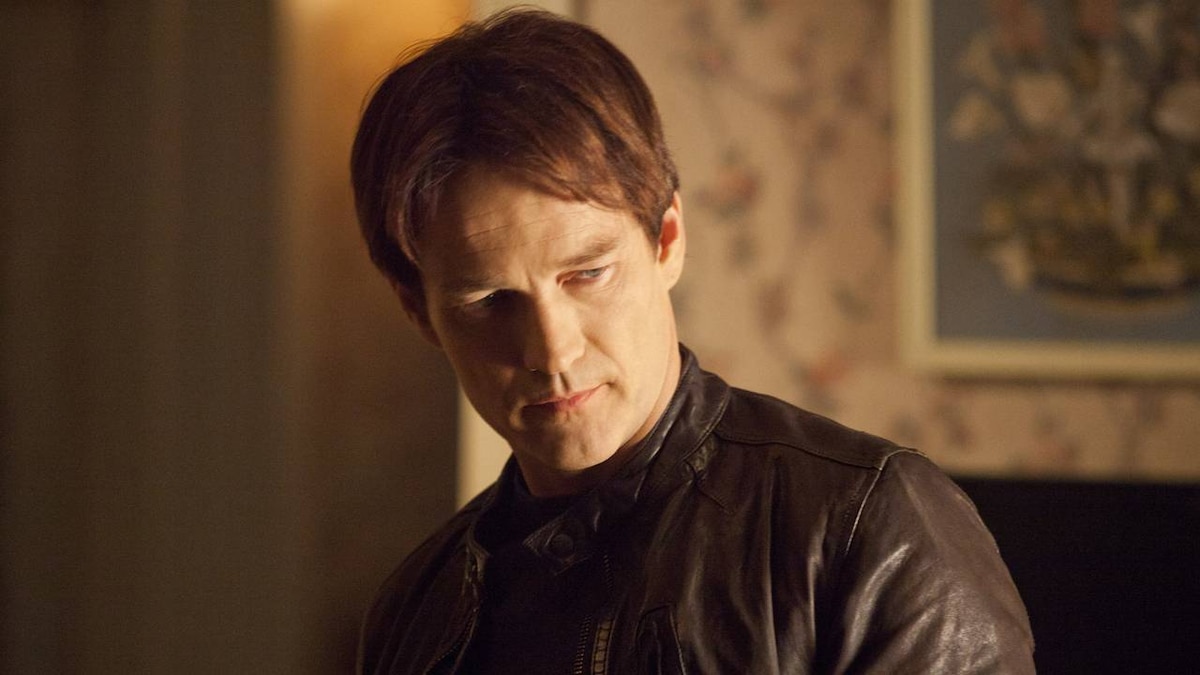 Let's Get Out of Here

Alcide carries Sookie, unconscious, back home. Bill arrives and feeds her his blood, but she doesn't seem to be taking it. Sookie eventually comes to and immediately wants to know where Eric is. Fed up with Sookie continually going back to the vampires who cause her so much trouble, Alcide storms out. Bill leaves to search for Eric, and Sookie thanks him for the blood on his way out. That night, with both their blood inside of her, Sookie dreams of making both vampires hers.

The witches regroup at the MoonGoddess Emporium. Tara tells Marnie (Antonia) that murder and war is not what they signed up for, but the witch doesn't care. She has one enthusiastic supporter, Roy, and a vampire under her control, Eric, who she plans to unleash on the "Festival of Tolerance" - sponsored by the AVL at the Shreveport Dorchester Hotel. Tara, Holly and the others try to leave, but Marnie (Antonia) holds them captive.

Jessica unloads her boy troubles on an uncaring Nan, who says all the whining has cured her of the urge to become a maker. When Bill arrives, he brings the AVL spokeswoman up to speed on the situation with Eric and the witches, and he asks her to cancel the tolerance rally because of the security threat. Nan refuses, and they all go to ground in silver once again.

Hoyt, depressed about his breakup with Jessica, is shocked by the sight of Lafayette (Mavis) in his home with a gun and baby Mikey. The police arrive, but with Andy hopped up on V and Jason ineffective, they're unable to bring the baby back to Terry and Arlene. Jesus arrives and calms Lafayette (Mavis) down, explaining that Mavis has taken over Lafayette's body because there's something she hasn't made peace with yet. Mavis reveals her history and the tragic end she met at the hands of the former lover who killed their baby. She just wants to hold her baby one last time. They dig up the child's remains, and Mavis'' spirit leaves Lafayette's body, now at rest.

Debbie Pelt hears Alcide sneak in late and pretends to be asleep. After falling back into depression and abusing V, she shows up at Sookie's house, hoping to help out. Sookie enlists her to infiltrate the MoonGoddess Emporium, where she finds a spellbound Eric. They're caught, but Tara communicates to Sookie that the wiccans are being held there against their wills and that Marnie (Antonia) plans to attack the vampire tolerance rally. Debbie and Sookie escape and head to Shreveport.

Marcus comes by Merlotte's looking for Sam, who is off camping with Luna and Emma, so Marcus leaves word with Tommy at the bar instead. That night, Tommy shifts into Sam and goes to Marcus's bike shop. He cracks wise about sleeping with Luna, and Marcus and his crew beat him to within an inch of his life. Alcide steps in and stops them, then carries the limp-bodied Tommy out in his arms.

Jason and Hoyt clean up the house after the spirit of Mavis has left. Hoyt gives his best friend a "monster box" full of Jessica's stuff to return to her. Jason drops off the box with Jessica, and while he declines the invitation into Bill's home, he soon finds himself having sex with Jessica in the back of his truck.

At the Shreveport Dorchester Hotel, Nan and a young woman campaign for vampire tolerance, sharing inspirational stories and overlooked facts about vampires. Meanwhile, Eric (still under a spell) lures the vampire sheriffs providing security into a trap, where Marnie (Antonia) places them under her influence as well. As Bill begins his speech, the vampires kill the event's human guards, sending the crowd into a panicked frenzy. Amid the chaos - and at Marnie (Antonia)'s command - Eric vamp-speeds towards Bill as Sookie screams, "Run!"