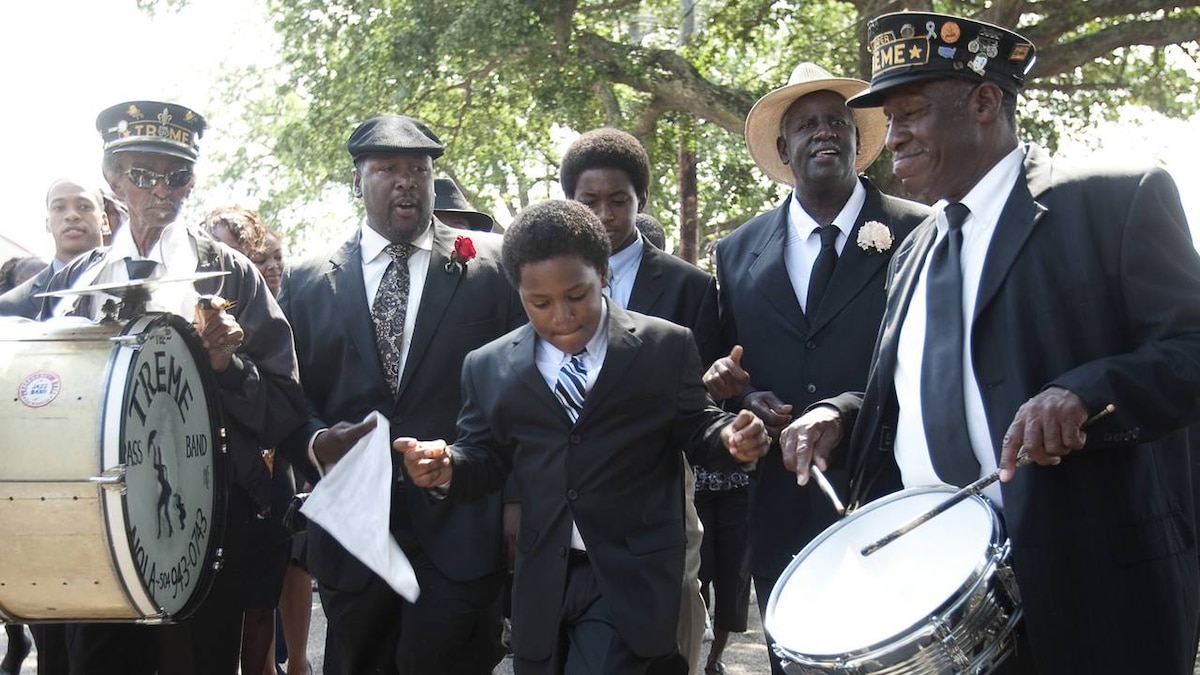 The police detectives investigating Creighton's disappearance mention a ferry passenger reported sharing a smoke with a "big man" who disappeared from the boat. Since Creighton's car wasn't on the ferry - and he quit smoking long ago - Toni tells the detectives it's unlikely that man was her husband.

Davis McAlary asks his mother for money to produce a full-length CD. Ramona McAlary says she'll have his father match what Davis has made so far, but he'll have to get a job to cover the rest.

Antoine Batiste meets Troy Andrews at a sushi restaurant. Because he has a conflict, Andrews offers Antoine a gig with Allen Toussaint; the pay is $1000 per man.

Summoned to Gigi's, Riley is surprised to learn Arnie Reyes has repaired the roof out of his own pocket. LaDonna Batiste-Williams offers to drop her suit if Riley goes into business with Reyes. The two men shake on it.

Delmond Lambreaux sews with his father and the Indians. Albert Lambreaux plans to work until time runs out. "If it were easy, everybody would be Indian," he says.

Janette Desautel and McAlary pack up her house. McAlary asks for one last day to convince her not to leave for New York.

As Harley Watt struggles to write a new song, Annie watches. She tells him she'd be too embarrassed to sing anything she wrote, but contributes a few lyrics to his song.

The two detectives return to Toni's with news that Creighton's body has been found. They excuse themselves when Sofia Bernette comes in. Leaving, they hear Sofia's cry.

McAlary picks up the morning paper and reads about Creighton. "This town," sighs Desautel. McAlary reminds her tomorrow he will to change her mind - he's still putting the plan together today.

For the R&B revue, Antoine practices with Allen Toussaint's band and Lloyd Price singing "Stagger Lee." After, Antoine joins the musicians in a game of poker, staking his pay from the gig as an IOU.

Toni briefs her colleague Andrea Cazayoux on her caseload, including the situation with David Brooks.

Because Aurora Nealand's roommate has returned, Annie goes back to the apartment and finds the woman Sonny picked up at Mardi Gras in their bed.

Delmond and Davina insist Albert get some sleep. Delmond, Cotrell and Memphis Ronnie discuss finishing two suits instead of three. Ronnie opts to wear his suit from last year. Albert wakes up to find decisions have been made in his absence.

After agreeing to all the station manager's demands, McAlary gets his old DJ job back. Acknowledging the start of St. Joseph's Day, he cues up "My Indian Red." Albert and his crew sing along as they sew. Antoine loses at poker. Toni cradles Sofia while she sleeps. Annie checks into a motel. Desautel books a ticket to New York. Sonny watches cars drive by, none carrying Annie.

Escorting Toni to Creighton's car, Shift Lt. Terry Colson lets her take the first pass searching the car and tells her to take anything she finds -- for Sofia's sake. Toni weeps as she goes through the car and finds Creighton's wallet in the glove box. Inside, she locates his note: "I love you, Cray." She drives off in tears.

Antoine continues rehearsing with Toussaint and the band. During a break, he proposes more poker so he can try and win back his losses. This time, Irma Thomas joins in.

Cazayoux tries to persuade LaDonna to consider an autopsy, but LaDonna's mind is made up.

McAlary drives Desautel around the city in his effort to convince her New Orleans has more to offer than New York. They stop for po-boys at Domilise's, and nap by the river.

Sonny apologizes to Annie, and offers to get a new bed. Annie says she needs more time and the freedom to play when she wants and with whom she wants. Sonny admits she's a better player and asks her to come home.  Not hearing the answer he wants, Sonny leaves.

Cazayoux updates Toni on her unsuccessful meeting with LaDonna: "Sometimes the truth doesn't set them free. It's just another burden." Toni tells Cazayoux she unsealed Creighton's will - he wanted a second line at the funeral, but she's planning a cremation and a small service instead. When her colleague notes Sofia might like a band, Toni refuses: "Can't dance for 'em when they quit."  She's furious with Creighton.

McAlary and Desautel enjoy a performance at the Maple Leaf and end the night at the Columns Hotel. Struggling to work on a song, Sonny smashes his keyboard and heads out to score some coke.

Masking through the streets, the Guardians of the Flame encounter the Congo Nation. The two groups engage in a ritual encounter of confrontation, before yielding in a show of respect for each other.

Paid in cash, Antoine ends up redistributing most of the money to his fellow musicians, including Irma Thomas, paying off his poker debts. At home, Desiree complains about how little he earned for so much rehearsing.

Albert poses for photos when NOPD cruisers pull up. Officers approach Lambreaux when a fourth car arrives. Sgt. Maurice Thompson emerges from the last car and diffuses the situation by ordering the cops to stand down.

At Poke's, Albert strums on his bass and Delmond joins in on trumpet. The two bicker.

Jacques drops Desautel at the airport. McAlary returns to his apartment and finds Annie waiting, in search of a place to stay. "What did I do right?" he asks.

Toni, Jacques, and Antoine are among those at Daymo's funeral at the restored crypt. At the service, LaDonna flashes back to the morning of the storm...

Daymo receives instructions from Jacques to move the meat out of the freezer. Desiree hustles a still-packing Antoine out of their house and into a crowded car. Desautel arrives in Alabama to stay with her parents. McAlary watches disapprovingly as neighbors Allan and Donald pack up. In New York, Delmond is on the phone with Davina while Albert boards up the house. LaDonna and her family wait on the line for over-priced gas; she tries again to call her brother.

Daymo is pulled over, but because of the bench warrant, is taken in. Sonnie and Annie revel in the emptiness of the city. McAlary finally decides to leave. The Bernettes hole up in a motel in Mississippi. LaDonna continues to try to reach Daymo.