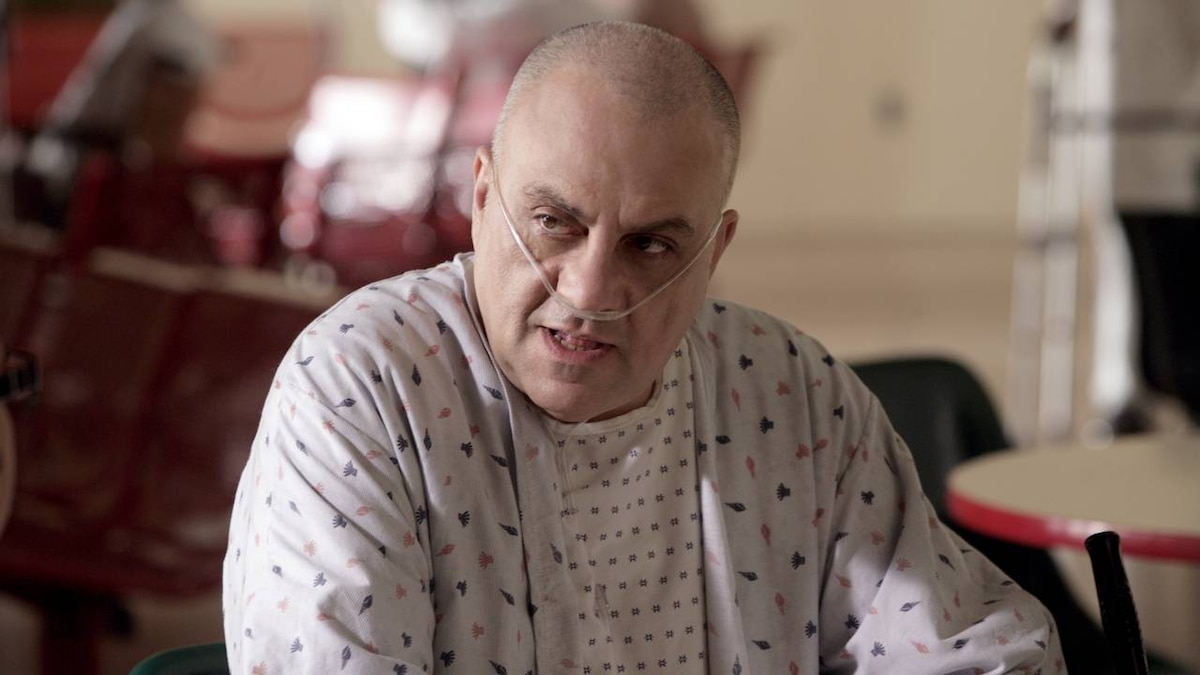 Open on: the boss Sally Boy discovers Frankie's bloody corpse hanging in a chop shop, he inches around to discover Michael crawling out from the trunk of a car. Pull back to reveal: the editing monitors this scene is being viewed on. Christopher, Little Carmine, their fellow investors and the director watch as Michael takes out Sally Boy in the final scene of 'Cleaver.' "F**k Ben Kingsley. Danny Baldwin took him to f**kin' acting school," Christopher declares.

Meanwhile, Johnny Sack, accompanied by Federal Marshals, gets the prognosis from the oncology specialist he's been flown in to see: It's stage 4 lung cancer. "And there's no Stage 5," notes Johnny. Rosen gives him 3 months. Back at the prisoner's medical center, he breaks the news to Ginny and his daughter Allegra, who are devastated.

Things are tense between AJ and Blanca at a Sopranos' family dinner, as they discuss the upcoming screening party for 'Cleaver.' "You two have a fight?" asks Carmela when Blanca goes to the bathroom. "I don't know," he responds, confused.

At the medical center, Johnny Sack is befriended by orderly/inmate Warren Feldman - a former oncologist doing time for murder. Feldman examines Johnny's chart and tells him he thinks he's got more like years than months to live.

Tony is jarred when he goes for the morning paper and finds Agents Harris and Goddard at the end of his driveway, soliciting him as an informant for their Joint Terror Task Force. "I think there's a word for that," Tony says, beating a hasty retreat inside.

At the 'Cleaver' screening, Carmela points out to Tony: "That's you," as Daniel Baldwin (playing Sally Boy) hurls a jar of nails at a wall onscreen. But when Sally Boy seduces the Cleaver's fiancee, Rosalie Aprile shoots Carmela an ominous look. At the party afterwards, T congratulates Christopher and chats with Phil Leotardo, urging him to shape up his family now that he's on the mend, but Phil doesn't want to be boss.

Ginny's brother Anthony Infante visits with Johnny Sack to discuss how he wants to arrange his estate for Ginny and the girls, and Johnny asks him how he will be remembered on the street. Anthony confides that some found him hot-headed when he took over from Carmine.

The morning after the premiere, Carmela is short with Tony, telling him that Ro pointed out the parallel between Sally Boy's relationship with Michael in the movie and Tony's with Christopher. "The thing with Adriana? I told you it never f**king happened!" Tony yells. "It's a revenge fantasy, Tony. Which ends with the boss's head split open by a meat cleaver."

Meanwhile, Chris talks to his sponsor about how hard it is to steer clear of the old people and places that make him use: "They already misinterpret I don't want to hang around so much. Paulie especially," he worries. When he and Kelli pick up the baby from Carm, who was babysitting, Carmela gives him a piece of her mind about his film and its message. Shaken, Chris heads to the screenwriter JT Dolan's and orders him to tell Tony that the fucking-the-fiancee storyline was his idea.

Silvio is at dinner with Gerry Torciano when a shooter working for Doc Santoro takes Gerry out. Sil gets out unscathed. The next day, Tony lunches with Little Carmine at the country club, asking him to step up and take leadership of his family. "You never thought you'd mutter those words, did you?" Carmine asks. But he's not interested.

Meanwhile, Johnny Sack's taken a turn for the worse. Ginny and girls are at his bedside as he takes his last breath. Anthony breaks the news later to Tony and the guys.

JT shows up at the Bing, saying he's supposed to meet Christopher. Knowing Chris doesn't come by these days, Tony is skeptical as JT strikes up a conversation about his inspiration for the Sally Boy storyline: "I stole that from Broderick Crawford in 'Born Yesterday.'"

In his therapy session, Tony vents about his frustration that Christopher seems to hate him so much, after all he's done for him. "You're hurt," Melfi notes.

At Phil Leotardo's social club, Phil hosts a celebration of what would have been his brother Billy's 47th birthday. He places the urn holding Billy's ashes back up above the bar - so he'll be able to see his friends when they visit. Working himself up over the story of how his family's name was changed from Leonardo to Leotardo ("a ballet costume"), Phil tells Butchie he's had enough. He shouldn't have stayed quiet in jail and he should have avenged Billy's murder. "No more Butchie. No more of this," he vows.

Meanwhile, Tony and Carmela, as Godparents, witness the christening of Christopher and Kelli's baby. At the end of the ceremony, Tony and Christopher embrace tightly. 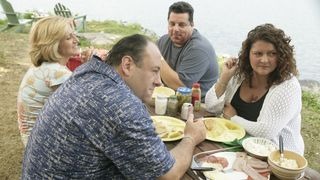 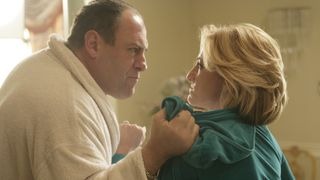 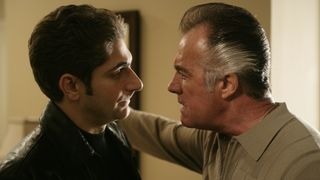 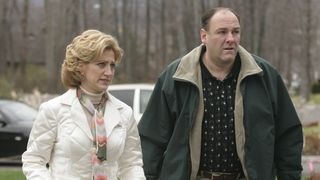 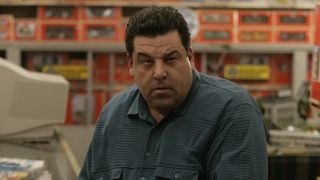 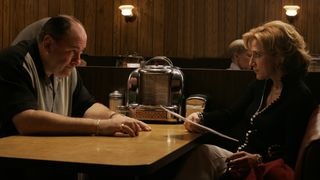