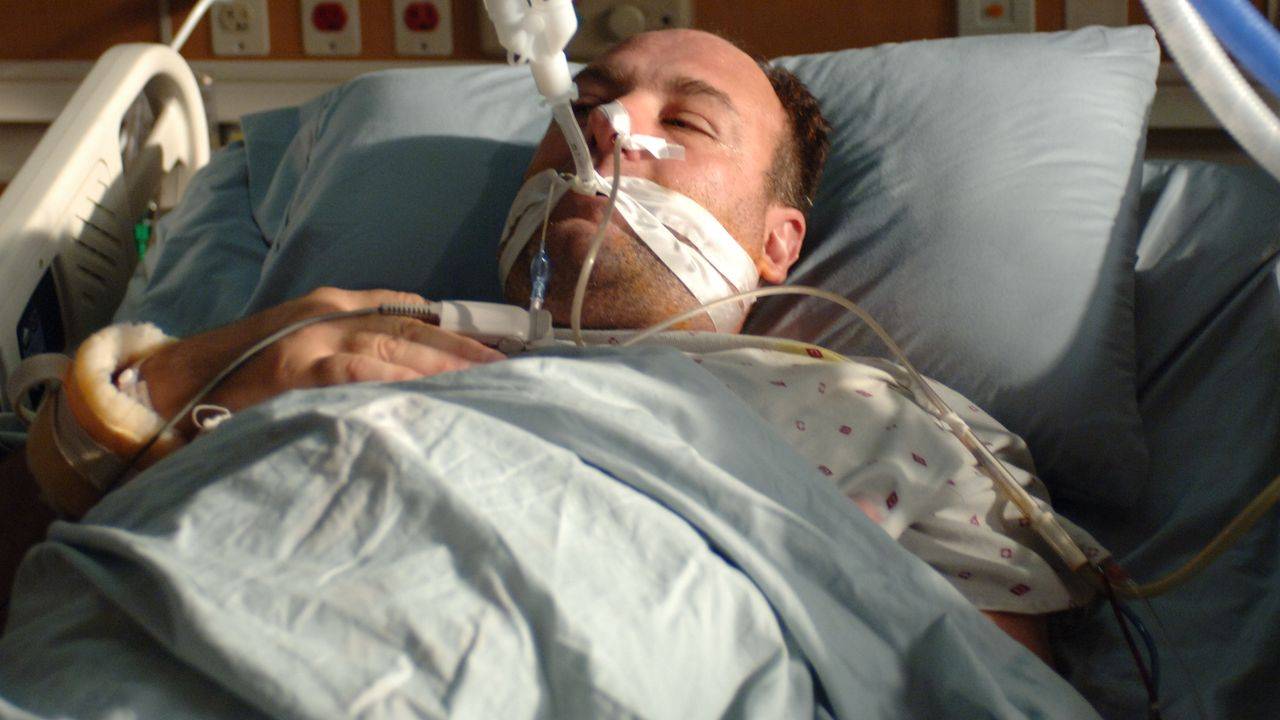 Tony wakes up in an anonymous business hotel room and heads to the bar for a drink. He calls home and gets the answering machine with...a young boy and girl: "Hi, you've reached the Sopranos." He smiles and leaves a message.

The next morning signing in for a conference, Tony realizes he has the wrong wallet and briefcase when the picture ID he presents belongs to "Kevin Finnerty", a solar heating systems salesman from Arizona. Tony calls home-but the woman offering consolation is not Carmela.

He heads back to the bar to see if he can find his belongings-or Finnerty, since he can't get on a plane or check back into his room without his own ID. A group of business travelers overhear his dilemma and invite him to join them for dinner. After dinner, outside the hotel, Tony makes a pass at a woman from the group-she reciprocates briefly but cuts him off. "This isn't going to happen...I saw your face when you got off the phone with your wife."

A helicopter hovers overhead. Tony looks up into its searchlight...and suddenly he is in a hospital intensive care unit, with doctors working on him. Carmela and Meadow are at his side.

Christopher, Silvio, Vito and Paulie wait for news, camped out in the hospital waiting room. It's not good. Tony's on a ventilator; Junior's gun shot damaged his internal organs. "Does he know he's dying?" asks Carmela. "We don't know," the doctor replies.

Meanwhile, business traveler Tony checks into another hotel using Kevin Finnerty's credit card. A couple of Buddhist monks overhear him checking in and thinking he is Finnerty, accost him: "We had a horrible winter at the monastery because of your heating system." They scuffle but flee before Tony can find out more about Finnerty.

After another restless night, Tony takes the stairs when the hotel elevator is out of order. When he trips and falls down a flight, we flash back to the hospital room where his family is camped out. Dr. Plepler warns Carmela about possible brain damage and urges them to talk to Tony, maybe play him some favorite music. Janice breaks down when she visits.

In custody, Junior is being questioned by a psychologist to determine if he shot Tony intentionally. But Junior is confused. "If somebody shot my nephew it was him himself. He's a depression case."

At Eugene's funeral, Silvio briefs the crew on how he'll run things in Tony's absence. Vito stirs things up asking for Eugene's "sports book in Roseville," bringing up Junior and asking why Bobby wasn't babysitting instead of Tony. "He's gotta make an issue out of everything," Christopher complains to Silvio.

Carmela plays CDs for Tony and reminisces, urging him to keep fighting. "I know that you're really strong, as strong as a bull."

Christopher stops by the Pork Store and sees Agents Harris and Goddard, who test the waters with him as an informant on Harris's new terrorism beat. "If you ever heard of anything going down-Middle-Easterners, Pakistanis-you'd be helping a lot if you picked up the phone."

Anthony Jr., who has been avoiding taking his turn at the hospital, finally sits with his father into the night. He promises to get Uncle Junior for this. "I'm gonna put a bullet in his f&%$in' mummy head. I promise."

Carmela praises Anthony for helping his family and he takes the opportunity to confide that he flunked out of school. Her mood changes: "My God. With your father in a coma."

At a hospital, business traveler Tony is diagnosed with Alzheimer's after falling down the stairs. When he returns to his hotel room, he stares at the phone, but can't bring himself to call home.