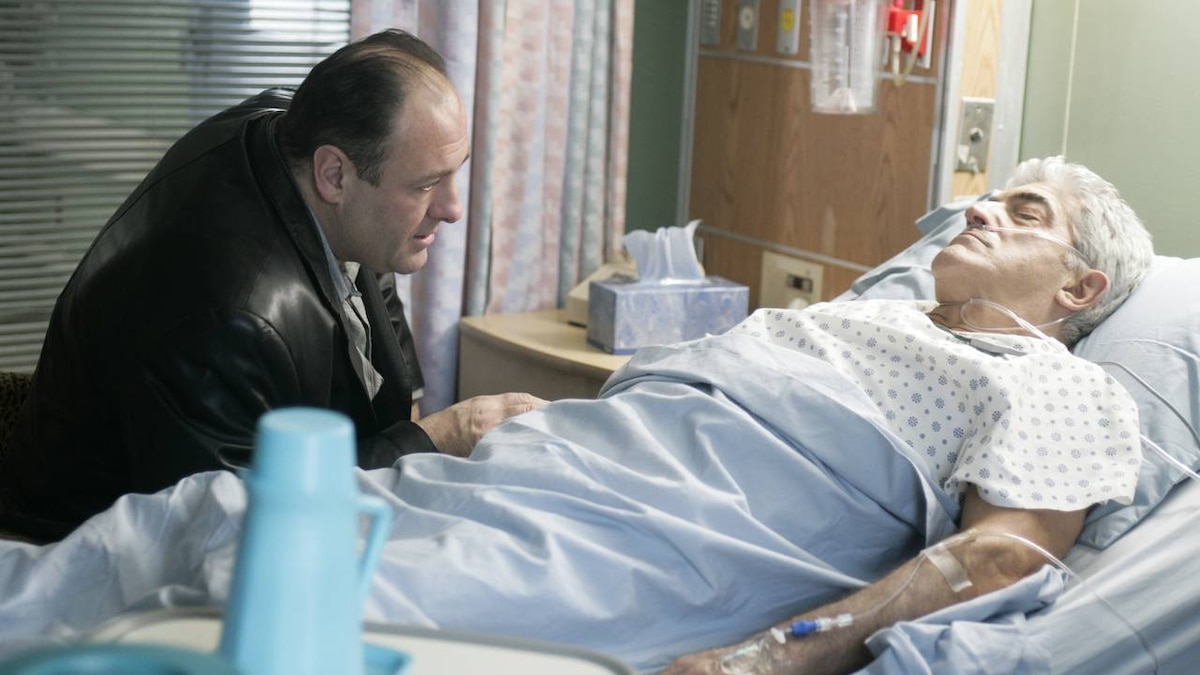 "Sometimes we gotta be reminded, you know, what's important."

Carlo dumps Dom's severed head down a sewer drain and calls Silvio to report: "I just got rid of the last." He asks if the "barbeque" in Sheepshead Bay is still a go. Silvio's not sure, but as Phil and his blonde housekeeper head towards "Sheepshead Hair Design" for an assignation - the building explodes-Tony's blown up the wire room.

Tony closes the deal to sell to Jamba Juice and apologizes to Julianna for not mixing business with pleasure when they met last, but admits he can't get her out of his head. He asks her to dinner but she declines.

Carmela learns Liz LaCerva tried to commit suicide. Now Carmela can't get Adriana out of her head-the Paris dream, now this. Between these thoughts, Anthony Jr., the holidays looming and her spec house "I feel like an utter failure," she tells Tony.

On Thanksgiving, Tony quizzes Christopher on why he's been hiding his new goomar; Christopher tells him that she's black and he doesn't want to hear Paulie's racist comments. But when he pays her a surprise visit, it turns out she's not black-she's Julianna. They met at AA.

While picking up garbage at his new construction job, Anthony Jr. meets Blanca Selgado, the Hispanic secretary processing his paperwork; he's instantly smitten. Blanca gives AJ the first six numbers of her telephone number: "I left the last one off. If you want to find me, you gotta work for it."

Little Carmine calls "a meeting of minds" to clear the air between Phil and Tony. Tony's mad about Vito and Phil reports that Fat Dom is missing and was last seen in Jersey. Little Carmine says the infighting's costing money. They are about to agree to a truce, wipe the slate clean, but then Carmine brings up the murder of Phil's brother Billy; Phil storms out.

Chris shows Julianna his movie script and she asks if Tony Soprano is like the boss in "Cleaver." Chris is worried about infringing on Tony's territory, but she promises nothing happened between them.

Prompted by Liz's suicide attempt, Carmela tells Tony she wants to hire a PI to track down Adriana. So Tony orders Silvio to lean on the building inspector for Carmela's spec house after all: "For all our sakes, my wife needs a career."

Phil and Gerry hold a war conference about the Vito fallout. If Dom was payback for Vito, why'd they blow up the wire room in Sheepshead Bay, Gerry wonders. "He's testing you all the time, and you keep indulging him," Butch DeConcini warns Phil. Phil agrees, but he won't whack a boss. "Pick somebody over there," asks Butch.

Blanca and AJ are hanging out when some punks start making noise waking up her son. "My ex used to kick their asses," she tells AJ. Reluctantly, he heads outside to take charge, but when he sees what he's up against, he changes tactics and tells him if they leave, he'll give them his bike.

Christopher confides to Murmur about his affair with Julianna after an NA meeting. Between Tony's interest and her being in recovery for junk, Murmur thinks it's dangerous. "Two of you together could be enabling. Bad habits shared." But Christopher swears he's different with her.

Bacala visits Junior to return the envelope of cash he sent over as a Christmas present, telling him he shouldn't even be visiting after what happened with Tony. "Still up on his cross?" asks Junior.

Julianna is doubled over with a hacking cough and Christopher insists on getting her some cold medicine. They settle on valerian tea. When she recovers from the cold, they take up smack again.

AJ and Tony are putting up the Christmas tree when Carmela opens a letter informing her that construction can proceed on her spec house. "This is the best Christmas present I could get!" she hugs Tony.

Patty Leotardo takes Phil to the doctor for his chest pains and he's given a clean bill of health-it's probably just gas. But a few days later, he collapses with a coronary. It'll be 5-6 months recovery.

Tony spies Christopher talking to Julianna but Christopher covers, saying he was getting advice on what to buy his black goomar Kaisha for her birthday. But Christopher decides that as between using again and banging Julianna, he'd rather confess to Tony about the sex. Tony takes the news in stride but is bitter when he tells Melfi "This is my reward." He has a breakthrough though, realizing that he's got a type-and it includes Melfi. "Dark complexion, smart, they smell a little bit, of money...That's probably why I still come here."

Agent Harris stops by the Pork store for a sandwich and warns Tony that someone close to him may be in danger, but he doesn't know the specifics. Tony thanks him. 'It's Christmas," he shrugs. Tony pays a visit to Phil in the hospital and tells him about his near-death epiphany and urges that they stop the madness. Phil tears up and seems to agree.

Carmela is busy with her spec house as they prepare Christmas Eve dinner. AJ brings Blanca and Hector to meet the family. She's sporting an expensive necklace-a gift from AJ. Carmela's not thrilled that she's ten years older than AJ and also Puerto Rican. "Least she's a Catholic," Tony counters.

Meadow calls from California as everyone gathers in a perfect family tableau.