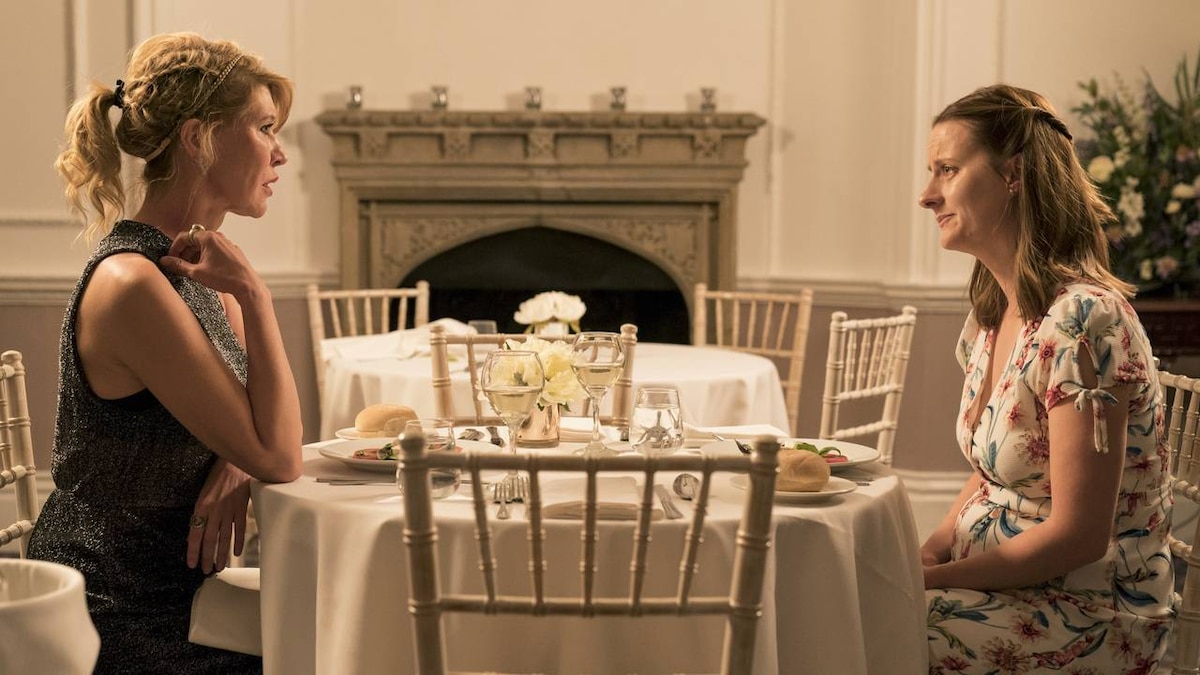 Now hitched, Emma takes Sally to a luxury Scottish resort for their honeymoon: "It's where stars stay," says Emma. When they arrive, Sally worries how they'll pay for the trip; her new wife admits she called the credit card company to increase the limit on Sally's account.

While Sally freshens up in the bathroom, Emma finds texts from Nigel professing his feelings for Sally on her phone; Emma quickly deletes the messages. To celebrate their marriage, Emma insists they enjoy the buffet downstairs, and then goes overboard with the seafood, piling it high on her plate.

The couple have a glass of wine, but Emma quickly hijacks the musical performance so she can serenade Sally — with a song titled "Sally Forever." Sally runs out of the room, crying from embarrassment. She trips running up the stairs and is comforted by actor Sean Bean.

Sally tries to sleep, but Emma drunkenly storms into the room. Sally hears her vomit in the bathroom, and when the two celebrate their wedding, Emma is sick on Sally. The next morning, Sally wakes up to Emma's sick all over the bed.

Sally escapes the room and runs into Sean and his much older wife; she joins them for a cup of coffee. The next day, Emma, now recovered, nags Sally to arrange a dinner with Sean. Sally begrudgingly agrees, despite feeling like she may be sick. Just as Sean arrives, Sally vomits on the table. Embarrassed, she rushes back to the room; Emma seizes the opportunity to give Sean her acting reel. Back in the room, the resort's nurse informs Sally she's not sick — she's pregnant.

Seven months later, Emma and a very pregnant Sally bump into Nigel and his new girlfriend while shopping. Emma insists they catch up over lunch. Nigel's girlfriend, Angie, asks how Emma and Sally conceived. Emma breaks the news and says NIgel was their sperm donor, but Sally slept with him. Angie storms out and Nigel follows.

In the parking lot, Nigel confronts Sally about the mean texts and voice message she sent him months ago — fully realizing the extent of Emma's meddling. Emma drives up; startling Nigel and Sally, causing her to go into labor.

Nigel arrives at the hospital to comfort Sally and profess his love. Nigel rushes to find the nurse when her contractions worsen. Emma beats herself up and finds a walker to go to Sally's bedside, claiming Nigel hit her. Nigel rushes to Sally's side and urges the hospital staff to call security. He accompanies Sally into the delivery room as Emma is forcibly removed.

Sally and Nigel sit in bed together, happily cradling their newborn. Sally admits she can't help but feel Emma's presence — Nigel assures her that Emma's in a facility and isn't getting out. Emma watches the couple from above through a peephole in the ceiling.