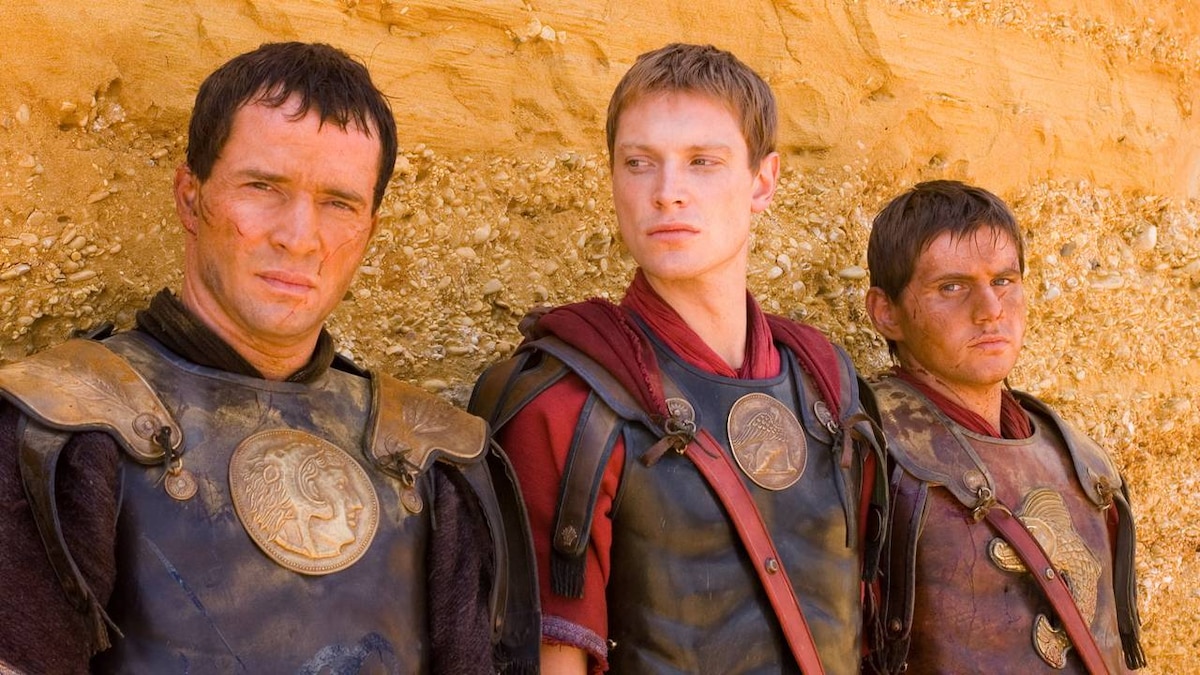 Riding across a barren landscape in Northern Greece, Cassius agonizes over how they will continue to feed 100,000 soldiers, as Brutus revels in the view: an infinite road of men. He's confident they will have no problem taking Octavian and his legions.

Far north in Rome, Mark Antony plots to surprise Brutus and Cassius by teaming up with Octavian and his forces. Scoffing at the obviousness of the strategy, Octavian insists they must kill Brutus and Cassius's most prominent supporters before their plans are revealed. Reviewing his list of targets, Lepidus looks up in horror. "These are among the finest men in Rome!" Maecenas reasons that the money of the noblemen will be useful, as Octavian hands the list to Agrippa with instructions to bring it to Vorenus, who will divide the names among the gangs.

As Antony adds a few additional enemies to the list, Atia interrupts to add one of her own - Jocasta's father. Octavia's friend is a bad influence, she says. "This is not a game mother," her son scolds, but he reconsiders when he learns the father is immensely wealthy.

Back in the Aventine, Vorenus erupts at Gaia when he catches her putting makeup on Vorena the Elder, and orders his daughter to wash it off. Gaia turns on Mascius after he leaves, angry that he didn't stand up for her. "I like you," he admits, "But be careful, slave, I have my limits."

Vorena the Elder angrily scrapes off her makeup, then heads outside with her sister and brother, a slave chaperone in tow. Chasing after her siblings, she catches the attention of a well-dressed young man out by the docks. He casually wanders up to her to ask for directions. The chaperone quickly pushes him away, but not before he and Vorena share a moment.

With orders received from Mark Antony, Vorenus convenes a meeting of all the collegia men, assigning each captain a list. Their collective mission: to kill 80 percent of the richest patricians in the city and to rob them of their fortunes. The question is how they will spend their "blood money," and Vorenus has a suggestion - the Feast of Pomona is coming soon, and he thinks they should return to the old custom of distributing fish and bread to the people, a gesture of goodwill that will change their image. "People used to come to the collegia for help - for justice," he tells them, sounding more like the senator he once was. "Money for marriage or funerals, extra grain." The men scoff - they're in the violence business, why pretend otherwise? "Whoever wins in Greece, wins Rome, and some kind of peace will follow," Vorenus explains. "The collegia must change or die." As the men stir in protest, he announces that the Aventine Collegia will honor Pomona - the rest of them may do as they wish. Memmio jumps in to support his plan, later explaining to Cotta that Vorenus is a "man of vision," and it's their duty to support him. But Pullo is suspicious of the endorsement, warning Vorenus that he doesn't trust the man.

Outside, Vorena's handsome suitor ties together two small human figures made of straw, then summons Lucius to bring the creation to his sister. Admiring her gift, Vorena steals coy glances at the man, careful not to stir the dozing chaperone.

Pullo gets the top job of taking out Cicero at his country estate, and decides to turn his mission into an extended family picnic, inviting Vorenus and his kids, their aunt Lyde and Eirene along for the day. He leaves them in a sunny field as he cheerfully gallops off to Cicero's with his assassination "kit." But a messenger beats him to the estate - delivering news that Antony plans to join Octavian in the attack against Brutus and Cassius. By the time Pullo gets to his door, Cicero is hastily scrolling a note to warn his fellow senators in Greece. He hands it off to the messenger before resigning himself to his fate. "Ah. The famous Titus Pullo," he says when he sees his Grim Reaper, "I am honored." Pullo returns the compliment, and learns that his work will earn him immortality. "I will live on in the history books," Cicero explains. "My killer's name will no doubt live on also." Pullo is disappointed. "Oh, my name. I thought you meant me."

As a terrified Tyro charges at Pullo with a sword, Cicero waves him off. "If you could see how absurd you look you would not protest," he tells his loyal servant. Cicero has freed him in his will, and he asks him to take care of his people. At Pullo's suggestion, he kneels to accept the sword.

Awaiting Pullo's return, Lyde comments to Vorenus on how beautiful Vorena the Elder has become, and suggests she could marry some day - if he would let her. "Niobe would only want her married to a descent man," he responds, and no man that she deserves would marry a prostitute. They're interrupted by the sounds of a startled horse - Lucius has run into the road, where he's nearly trampled by the messenger Cicero sent to Greece. Dropping the letter case, the messenger curses Vorenus and the kids and nearly earns himself a Centurion beating, until Lyde screams for Vorenus to stop. The messenger rides off - leaving Cicero's message behind.

North of Rome, Agrippa is disturbed to learn that even more names have been added to the assassination list. He excuses himself for air. Pacing outside, he gets a visit from Octavia, on a visit to her brother. She asks if he's been avoiding her, and he begs her not to toy with him; he's aware his feelings for her are hopeless. "I have not a drop of good blood in me...You'll not be married to the commendable son of a nobody." Indignant, Octavia insists she'll marry whomever she wants. "No...you'll marry some useful nobleman of your brother's choosing." Octavia turns away.

At a synagogue in the city, a Rabbi asks a congregation for money - to lobby Rome to keep King Herod in as King of Judea. Levi interjects: "In this holy place, you conspire in bribery so that idolaters can rule over your own people." Better a ruler they know and can work with than Ptolemy or the Seleucids, the Rabbi responds before asking Levi to identify himself: "We are the sons of Arod, from the families of Manasseh. We are the wrath of Israel." Calling the Rabbi a traitor, he then spits on him, setting off an all-out brawl, with Timon, Saul and two of his thugs joining in to help. When they finally escape, Timon explains their mission to their confused henchmen. "We are redeeming the kingdom of Zion."

As soldiers prepare to head off to war, Pullo confides to Vorenus that he's worried about the peace that will follow. "Violence is the only trade I know," he tells Vorenus, fearing he'll soon be jobless again. Vorenus tries to assure him they will do big things, but Pullo cannot be convinced.

In a trysting house, Octavia and Agrippa steal a few passionate hours together, far from anyone they know. When the time comes for him to go, Octavia breaks down in tears. She rushes home to send her brother off to war, ignoring Agrippa at his side. Her mother doesn't miss a beat. "How long have you two been lovers?" she asks, reminding her daughter she won't be marrying the soldier. "I know," Octavia concedes. "But I love him." Atia shakes her head. "Soft as cheese."

They're interrupted by the horrified screams of Jocasta, collapsing in their atrium, her clothes torn and muddied. Her family has been murdered, she tells them, and the killers dishonored her. Octavia runs to her side and offers her refuge at their home, pleading to her mother. Atia freezes. "Of course - we'll protect you."

Admiring his old war helmet, Pullo confides to Eirene that he wishes he was leaving with the soldiers. "It will be a short campaign," he says as she bursts into tears. "I'm pregnant," she finally announces. Pullo has to repeat the word, in a state of shock.

As Cassius and Brutus prepare for the arrival of Octavian and his forces, Brutus admires his father's gold signet ring, sent to him by his mother for good luck. A breathless aide interrupts with a warning: Octavian's troops are one day's march away, and he's joined by Mark Antony. "Impossible," Brutus says as they calculate the numbers: 19 enemy legions to their 14. Cassius urges an immediate retreat, but Brutus protests. "No more running...If we win, all the more glory for us. And if we are to die? This is as good a place as any. It is in the hands of the Gods."

Their soldiers outnumbered, Cassius and Brutus head into the battle, while Mark Antony and Octavian watch from a remote hilltop, Antony as cheerful as a spectator in the Coliseum, Octavian looking terrified. Unable to resist a good sport, Antony leads them into the action.

As their right flank quickly goes down, one of Cassius's guards is taken - and he goes down next. Cassius is taken to the rear of the battle, where Brutus hovers over him, refusing to leave when his men warn him of the encroaching soldiers. After waiting for Cassius to die, Brutus sends his men on their way to save themselves. "Give my best to my mother. Tell her...something suitable."

Resigned to what's next, Brutus walks toward the soldiers, rips off his armor, and pulls his sword. Wading into the front ranks, the men do nothing at first, until he slashes a soldier's calf to provoke them. They take turns thrusting their swords.

Hours later, Mark Antony and Octavian search the smoldering fields, as bodies are piled on bonfires. Agrippa informs Antony that the body of Cassius has been found, but they are still searching for Brutus. Pleased, Antony orders him to pack Cassius's head in salt for transport back to Rome. "People appreciate the little touches, I find."

As the group continues on, Antony misses seeing a peasant tugging fiercely on a hand from one of the dead soldiers. The peasant severs a finger from the body and holds it up, with Brutus's signet ring shining brightly in the dust.