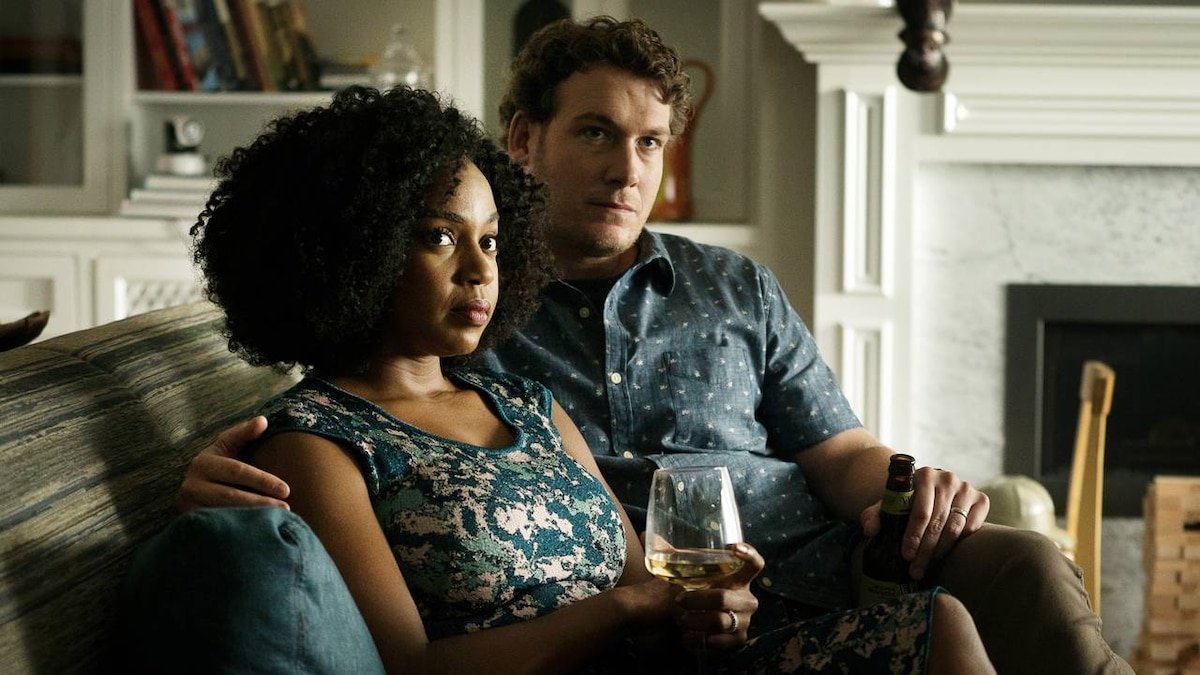 From Sun Up to Sun Down

Ramon tells Dr. Shokrani about his vision in the park, and how he believes the woman he saw may have been his birth mother. He describes how the woman dragged her nails across her face the same way Farid's mother did in his other dream.

Shokrani recalls a memory of his mother doing the same thing in front of him as a boy.

Shokrani writes Ramon a prescription, but Ramon gets heated about the lack of answers. Hearing her son yelling, Audrey interrupts the session, followed by Greg. Shokrani dismisses her recommendations on medication, even when Greg rises to defend her knowledge on the matter.

Ramon arrives home to find Henry in his apartment as if nothing happened. Henry explains he left quickly to help a and apologizes for not being there when Ramon needed him.

Audrey goes on Greg's computer to search for a new family therapist for Ramon. " 4 HOT FUN" comes up in his browser history and she discovers conversations between Famiko and Greg, one of which includes him thanking her for the cock sling. Audrey leaves Greg a voicemail to call her back.

Out for a run with Duc, Audrey focuses on Ramon. She wonders if his involvement with Henry and drugs might be causing the hallucinations, but Duc disagrees.

Audrey meets with Steven Benjamin, and they catch up. Steven, who believes kids are only interested in selfies, is challenged by Audrey. He asks her to make a presentation to his board about the Empathy Initiative.

Duc swings by Ramon's. His brother is convinced his visions have some but isn't sure what. He asks Duc if he remembers his own birth mother.

Duc, age 5, watches his mother with a client, her face vacant of expression. She motions for him to keep quiet.

Duc tells Ramon to leave the past in the past. Carmen shoots Duc a text and they meet at a restaurant. He immediately makes it clear he is celibate, and is slightly embarrassed when he realizes sex wasn't on her mind. The two enjoy each other's company without the pressure of ulterior motives.

Hailey's teacher introduces Ashley to Jamila, the mother of Hailey's new cubby buddy. The two woman subtly acknowledge the teacher "knew they would hit it off" since they are both . Ashley is embarrassed when she doesn't have lotion for Hailey, and Jamila, "always prepared," pulls homemade lotion from her purse.

Ashley meets her dad for lunch. She gets emotional discussing how something feels missing in her and then tries to explain another complication: her white parents don't understand her, but she also can't connect with other black people.

At the university, Greg attempts to shake up the philosophy faculty meeting, but the dean makes it clear he should watch his behavior. Greg returns Audrey's call, but she ignores it, busy printing pages from an unknown source.

That night, Ashley is surprised she and Malcolm have been invited to Jamila and her husband Corey's for dinner. Ashley tries to connect with the couple, but cannot tell if Jamila's responses are condescending or genuine. When Jamila hears Ashley's sister attends the high school with the lynched effigy she is concerned, until Malcolm reveals Kristen is white and Ashley is adopted. After dinner, he doesn't understand why Ashley is so sensitive him sharing the information.

Navid and Kristen start working on their "My Portland" but quickly realize they are filming the same locations as everyone else. The two are when Kristen spots Henry. They follow him to a homeless community, watching as he disappears inside a tent. While they wait to find out more, they discuss sex. Navid guesses Henry is hooking up with a homeless man. When Henry and another guy emerge from the tent, Kristen records it on her phone.

At home, Farid reels while trying to explain all of the coincidences that are connecting him with Ramon. Layla asks if he is still taking his medication. He gets absorbed again in Ramon's game, merging it with memories of his own.

That evening, Shokrani's pills appear to lay out in the form of 11-11. He tosses them into the toilet.

Ramon asks Henry about one of his tattoos and learns he is from Waco, Texas, with no plans to ever return there. Ramon tells Henry he loves him.

Upstairs in her room, Kristen hears shouting as Audrey confronts Greg about his affair. Audrey reveals what she's been printing — the conversations between Greg and Famiko. Audrey kicks Greg out of the house. As she looks around the empty living room, he stands outside, unsure where to go.