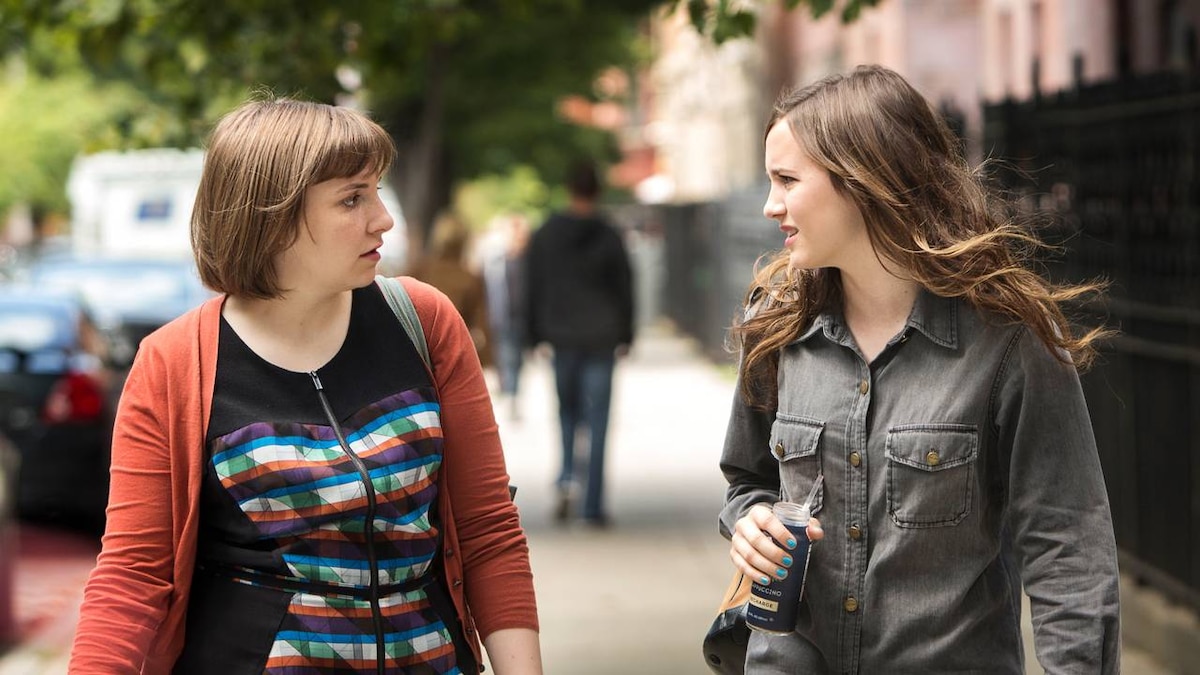 Tad and Loreen leave couples therapy, and Tad admits he has one more thing to get off his chest: "I've been thinking lately that I'm gay. Not lately, actually, for a while." Loreen laughs at first, thinking it's one of his "stupid pranks." When she realizes he's not kidding, she gets angry. "I call bullshit on this," she spits. "You cannot stand the fact that I got tenure before you did, can you? That's what this is about."

After class, Hannah talks boys with Cleo, one of her students. Fran approaches, but both girls awkwardly ignore him. After he leaves, Cleo asks if Hannah wants to "go get something pierced." On their way to the tattoo parlor, Hannah and Cleo discuss her date with Fran. Cleo offers her surprisingly wise advice, suggesting that Hannah has made poor relationship choices in the past and noting that Adam "seems really damaged."

Desi brings home a surprise for Marnie -- a box of "the tightest f**king German guitar pedals ever made." Marnie flips when she hears that he spent their entire $2,000 advance without consulting her. "Desi, there's nothing on this entire f**king planet that's worth our whole advance!" He storms out of the apartment after calling her a bitch.

While Shoshanna tweezes her bikini line, Jessa suggests the best way to succeed with Scott is to "make it clear that you're young, fun and flaky." Though hesitant to take her cousin's advice, Shoshanna admits, "This is kind of your gift." Jessa suggests Shoshanna show Scott "an act of love when he least expects it" on their date that evening.

Hannah and Cleo decide to get "matching" frenulum -- the webbing under the tongue -- piercings as a "friendship thing." But after watching Cleo suffer through the painful ordeal, Hannah decides against having it done herself.
Ray and Shoshanna stand on a street corner, attempting to secure signatures to support Ray's community board campaign. Shoshanna has far more success, plying people with lies that Ray is "in favor of no taxes and free bagels before 11." Ray inquires after Shoshanna's love life, and she reveals her coming date with Scott. Ray admits that there's someone he wants to be with but can't. Shoshanna assumes it's her but is appalled when she realizes he's talking about Marnie.

Hannah confronts Fran about their bad date and apologizes for her behavior.
She explains that she's trying to make better choices, and thinks one of those better choices would be to hang out with him. Fran admits he's not interested -- while intrigued by Hannah, he wants to be "less attracted to drama" following an ex that drained his bank account and poured battery acid on his plant. Hannah insists she's not the person Fran thinks she is, but he disagrees. "I think you're not the person that you think you are," he tells her. "I think that's where the confusion is."

Shoshanna enjoys an easy rapport with Scott on their dinner date, until he
suggests he isn't looking for a trophy girlfriend -- he wants to "watch someone soar." Feeling insecure in light of her abysmal job hunt, Shoshanna takes Jessa's advice and makes an awkward sexual proposition. Scott laughs it off, telling her he really likes her, and would like her hand on his cock, "but not when half the cast of ‘The Good Wife' is at the bar."

Tad and Loreen arrive at the home of their friends Avi and Shanaz for a party celebrating Loreen's tenure. The hosts notice the tension between Tad and Loreen, and later when Tad toasts her, Loreen laughs at his sentiments before excusing herself, claiming she can't listen to his "bullshit" any longer. Upstairs, Avi pulls Loreen into a bedroom and kisses her. He admits that he's in love with her and knows that she and Tad are having problems, though he's clearly unaware of the specifics. Loreen pushes him away, laughing at Avi's "bad f**king timing."

That evening, Desi finds Marnie at a coffee shop and apologizes for his earlier
behavior. He tells her that bringing home the guitar pedals was the last decision he wants to make without her, then presents an engagement ring. Marnie's anger immediately melts away and she agrees to marry him.

Back at home, Tad and Loreen further discuss Tad's sexuality, with an
incredulous Loreen asking questions like, "So you want to suck a dick now?" Hannah calls, wanting to know if her mother thinks she's a dramatic person. Although Loreen insists that Tad must be the one to break the news about his sexuality, she can't keep it to herself. She finally breaks through Hannah's babbling and blurts, "Hannah, your father is gay."