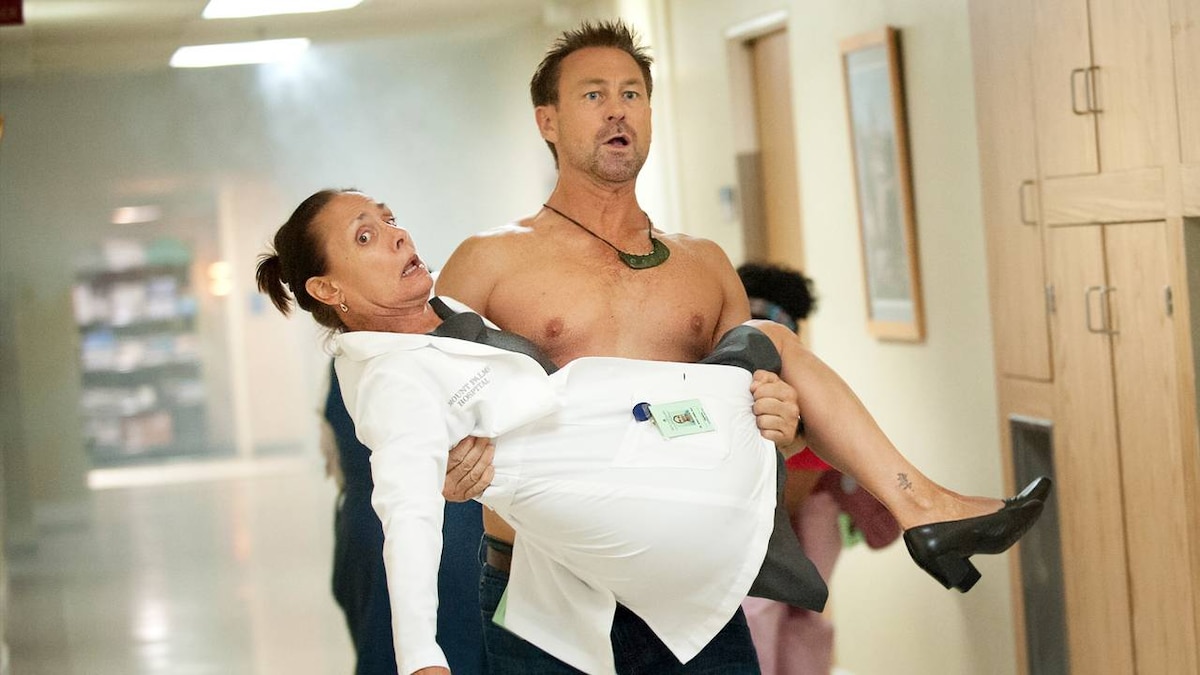 Written by Mark V. Olsen and Will Scheffer
n Directed by Miguel Arteta

In preparation to picket Billy Barnes' closure, DiDi gives a scab nurse a tour of the ward. DiDi explains that they've been closed for about a month and that while their patients have dwindled, the ward remains open while the union sues the hospital.

nDawn shares her delight that Dr. James is an ideal match to be her kidney donor. After Dawn leaves, Dr. James quietly takes a call from "a Bengali Transplant Service," from whom she's seeking a kidney so that she doesn't have to donate hers to Dawn. In the break room, DiDi catches Dawn dipping a bagel into a tub of ice cream, continuing to sabotage her health.

nSister Lily Claire from St. Edwin's Memorial arrives to discuss a new position for Dr. James. They are excited to welcome Jenna onto their staff, as they hope her clinical research will raise their hospital's profile. Dr. James turns down Sister Lily Claire's offer to bring her nurses with her, claiming that they wish to stay on at Mount Palms in other capacities.
nLater, Dr. James and Dawn meet with Dawn's nephrologist in order to discuss the transplant. The doctor praises Dawn for being so proactive in her search for a donor and finding a candidate even before she knew she needed one. Dr. James inquires further about Dawn's sudden turn for the worse and realizes that Dawn sabotaged her health on purpose. Livid, Jenna rescinds her offer of a kidney.

nDr. James finds DiDi in a picket line and tells her that Dawn has been lying about the severity of her kidney disease. When Dawn insists that she could be dead in four months, Dr. James explains that Dawn could reverse the damage she's done if she just had a little self-respect. Dawn admits that she has none.

nAfter picketing, DiDi and Marguerite bring two new patients onto the ward, including a homeless woman who needs a bath. Dr. James balks, feeling that DiDi's legal battle with the hospital is holding them all hostage. Dr. James admits that the job has been so tough on her that she drives home in the far right lane in case "the panic attack becomes a heart attack."

nFollowing a group hug between the Billy Barnes staff, Dawn heats up water for tea in the break room microwave. However, the microwave explodes and starts a fire on the ward. The bare-bones staff rush to evacuate their patients as the fire spreads. DiDi struggles in vain to get the sprinklers to work. The fire department is unable to contain the blaze, and it spreads to the rest of the hospital.

nA few weeks later, Dr. James and Dawn lay side-by-side waiting to be wheeled into surgery. DiDi, Patsy, Dennis and Sammy see the women off. Before they're brought in, Dr. James tells Dawn, "There is no justice, but there is mercy because that's what we can give to each other."

1.This Is About Vomit, People.

Dr. James is threatened by a new doctor; DiDi fights for her rights; Dawn gets unwelcome news.

The staff deals with an infectious disease crisis; DiDi faces a family drama; Dr. James is affected by a patient with a complicated past.

Dr. James and Dawn meet their UK counterparts; Patsy embraces his truth; DiDi is caught between work and family.

5.Please Partake Of A Memorial Orange

Series finale. As the staff struggles to stave off the closure of Billy Barnes, an inadvertent oversight seals the fate of the ward.