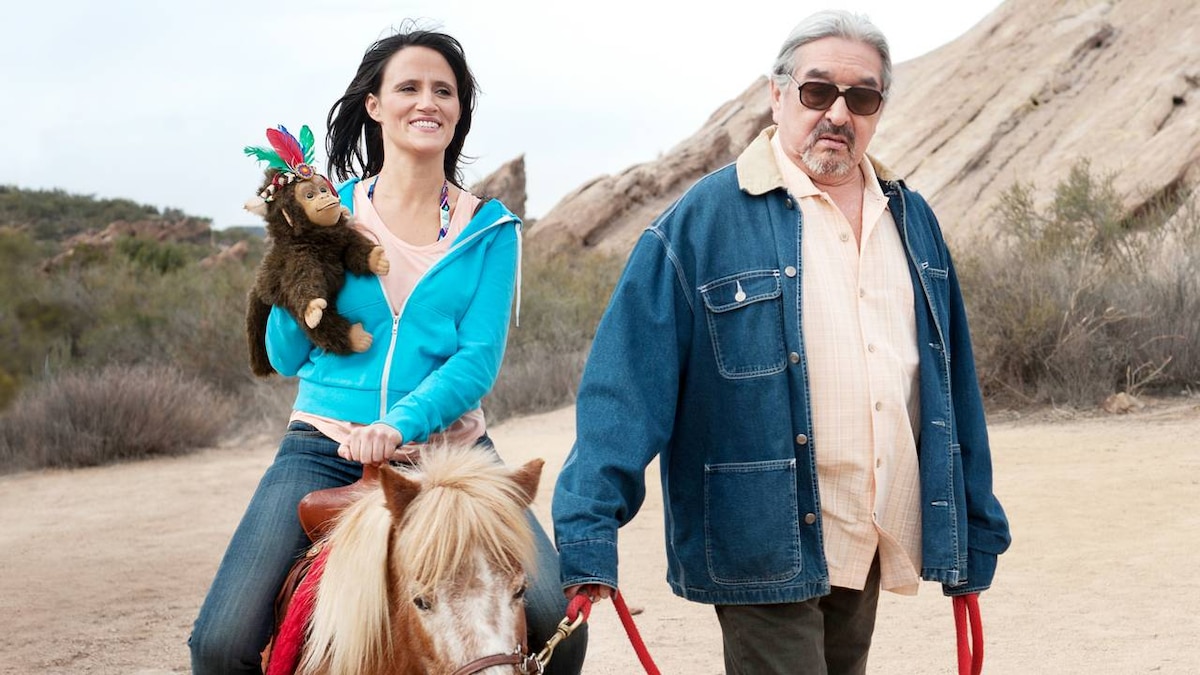 Tom reads his great-great-grandfather's letter to his "sweet Mojave girl." Kitty identifies the Mojave as a Native American tribe and Tom gasps: "She's so Indian!" Tom relates to the Native American culture: "I feel stuff," he says. "What's more Indian than that?"

Tom goes to pick out a rental car and a convertible catches his eye: "It's so red!" He ultimately agrees to spend more money than he was intending, but he hopes "his automobile of choice" impresses Ally, the woman he met after witnessing her car accident.

"If anything, it's like she's a little pony and I'm the stable boy, offering her some of my carrot." -Tom

He takes his new car to get lunch with Ally. She suggests a food truck called the Lucky Leprechaun: "Maybe you know somebody in there?" Over questionable corned beef, Tom learns that Ally is a writer who moved to California from Connecticut with her boyfriend, but she's newly single and works at a bookstore. Tom shares how tracing his family tree has allowed him to meet "all these interesting and fairly close to mentally unstable relatives." He kisses her goodbye on both cheeks and is pleased with how the date went.

Tom visits a genealogical research center where he gets a copy of his great-great-grandparents' marriage certificate. Tom notices Rebecca's last name is not listed and the records clerk explains this may be because she was Native American. The clerk suggests visiting the Mojave Indian Reservation near Barstow.

"My favorite saying is 'What's crazier than a time zone?'" -Kitty

Tom returns to Al and Kitty's house to find that Bea and Pete have arrived a day earlier than he expected because Pete was confused by the time difference: "It's time travel." Tom breaks the news that Rebecca may have been Native American. "That explains my hair!" says Bea. Al says he has a Native American patient who can help Pete trace his family. She has bad feet "from the moccasins" and "all the hopping."

Bea confesses it was difficult to travel with Pete: "He kept hitting on the stewardesses." Monkey reveals that Bea once had a one-night stand with Pete and that she still secretly likes him. "I didn't know that!" Bea exclaims.

On the way to the Indian reservation, Tom, Bea and Pete stop at a souvenir stand. Pete picks up a tomahawk: "Me big chief, crouching tiger, hidden bull." Tom chooses a furry cup with a handle made out of an animal leg. Monkey puts on a headdress that was "owned by the grandmother of Pocahontas," according to the stand's proprietor.

"I was expecting more feathers up the back or a grass skirt or a tomahawk." -Pete

Al's patient's grandson, John Smith, takes the gang up to the reservation. They meet Chief Running Bull and tribal shaman White Feather in a trailer home watching TV. Running Bull gives them a tour of the reservation and humors their request for Indian names. He dubs them The Tall Man, Boy with a Hat and The Monkey Woman. As the Chief expounds on the connectivity of the universe, Tom smiles at a text.

Fulfilling a lifelong dream to go horseback riding, Chief Running Bull leads Bea around on a small pony as it trots in a circle; Monkey calls the ride "some white-knuckle shit." Pete continues to embarrass himself, asking White Feather what it was like when he came over from India. Tom shows the picture of Rebecca and the men refer him to the records office in Barstow.

"Let's go find out if this hot Indian bird's your real mom!" -Pete

Tom shows the records office employee Rebecca's picture. She tells him to talk to Marty Schmelff, whose family has been in Barstow for over 100 years. He and Bea head to Schmelff's Dry Goods store. Marty is astounded when he sees the picture of Rebecca; the shot is part of a larger photograph of Rebecca and her family -- she's a Schmelff. Tom observes the name "sounds very Jewish-y." Marty confirms this fact and shows Tom a headshot of his great-uncle Ezra Schmelff, a 1920s film star.

Later, Tom gets a call from Glenn Pfister who opens his DNA test results; Tom has no Native American blood. Tom realizes he relates to his Jewish ancestors. He may not have escaped persecution but "the rush hour commute in the London underground? Oy vey." He raises his furry souvenir cup in a toast: "Mazel Tov."