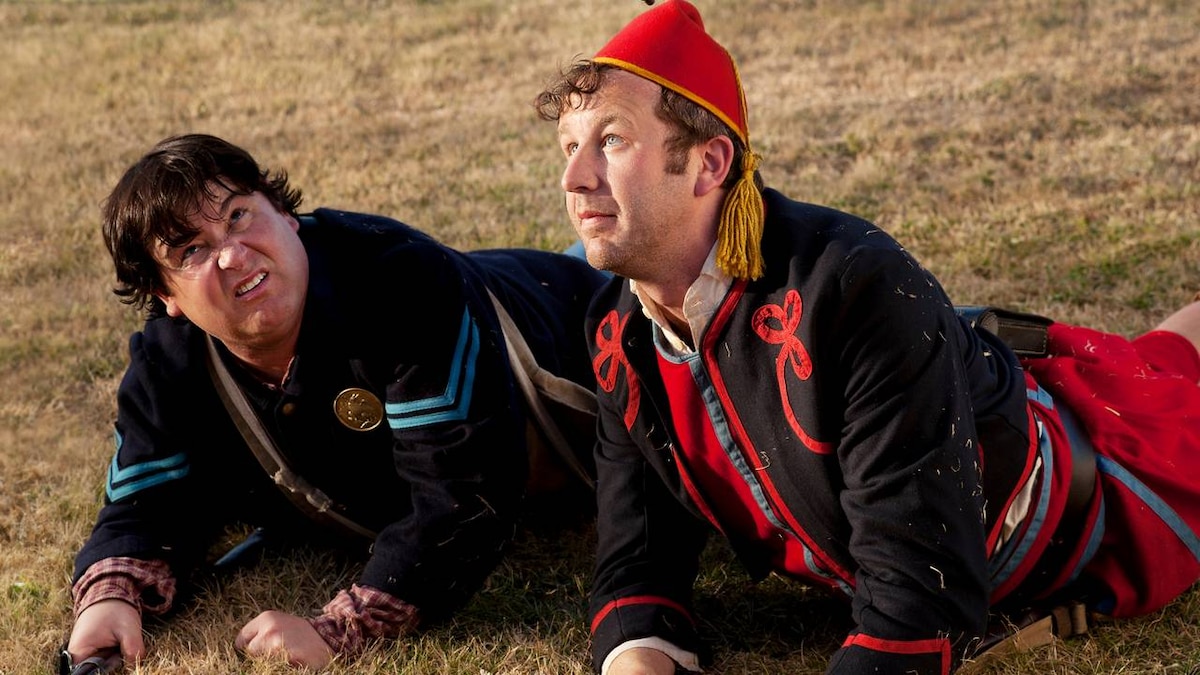 Pete Stupples calls Tom Chadwick from London with good news; Tom's been invited to interview for a job in a Crash Investigation Department. They're discussing details of Pete's arrival in California when Tom is frightened to see the cat sitting on his bed. He timidly approaches the animal and it darts away.

Al shows Tom a picture of his great-great-grandfather Charles in a Confederate uniform, which is missing a button on its jacket-identical to Charles' Union uniform. The family examines both photographs and buttons. Al theorizes that Charles was a double agent, "maybe triple." David observes that Charles' hands are "rigor mortized" from fear. Rick has heard of this phenomenon; he participates in Civil War reenactments.

Rick takes Tom to visit his friend and fellow reenactor, Harvey, who has a cannon in his front yard. Harvey's online search reveals that Charles fought for both the Union and Confederate sides in the same battle. Harvey pledges further research and he and Rick insist that Tom join their reenactment that weekend.

Rick and Julie show Tom their place, which is decorated with stuffed owls. Rick notes that if not for the house across the street, they would have a "180-degree view of the Pacific." When Julie informs Rick they're out of coffee (she "only has 4 hours a day to go shopping,") the couple erupts into a fight. Tom offers to pick some up.

On the way out of the coffee shop, Tom witnesses a car crash and sees a large man arguing with a blonde woman. He intervenes and quickly assigns fault to the man, who calls him a "superstar witness traffic leprechaun." Tom condemns the man's aggression and "mythical racism." He threatens the man, saying that he's in the British Special Forces. The man impatiently agrees to pay for the damage. Tom comes clean about not being in the Special Forces but still gives the woman his number. She introduces herself as Ally.

Tom arrives to find Julie and Rick have made up. Julie draws a picture of an owl with the caption "Butter! I need more Butter!" Tom chooses a Zouave uniform for the reenactment, which he later realizes makes him look like a "Russian dancing bear." Julie is also dissatisfied with her costume; she's the only prostitute in attendance.

Harvey goes over the battle plan with the opposing General named Phil. Harvey brings up the Confederacy's past snafus. Phil concedes to his point about gunpowder: "That was too much, we won't drink this time."

Harvey gives an inspirational speech to his army: "Over time, most of you will die." The battle starts with a flurry of cannon fire and car alarms. The men begin shooting. Rick falls to the ground and grabs his "ticker." He instructs Tom not to talk: "You're dead now." Tom ignores his directive by answering his ringing phone. It's Bea calling to say she's coming to LA with Pete.

Needing to use the bathroom, Tom crawls off the battlefield while Rick follows in protest. They're captured by the other side, but their abductors are quickly "murdered by a common camp whore" when Julie comes to their rescue.

Phil says goodbye to Harvey. Tom offends Phil by asking if it's hard to be on the wrong side of the battle. "You sucked the teats of our cows, and you were not invited," he says. Harvey gives Tom an envelope of information about Charles.

"That's really sweet he'd change his outfit like that for her." -Kitty

Tom shows Harvey's findings to Al and Kitty. A letter explains that Charles wore two separate uniforms so that he could cross enemy lines to see his love, Rebecca. Tom learns the couple eloped in England when Charles' parents disapproved of their relationship. Tom is pleased to learn that his great-great-grandfather was "a big old romantic and brave as a boot." Tom commits an act of bravery himself, finally petting the cat.