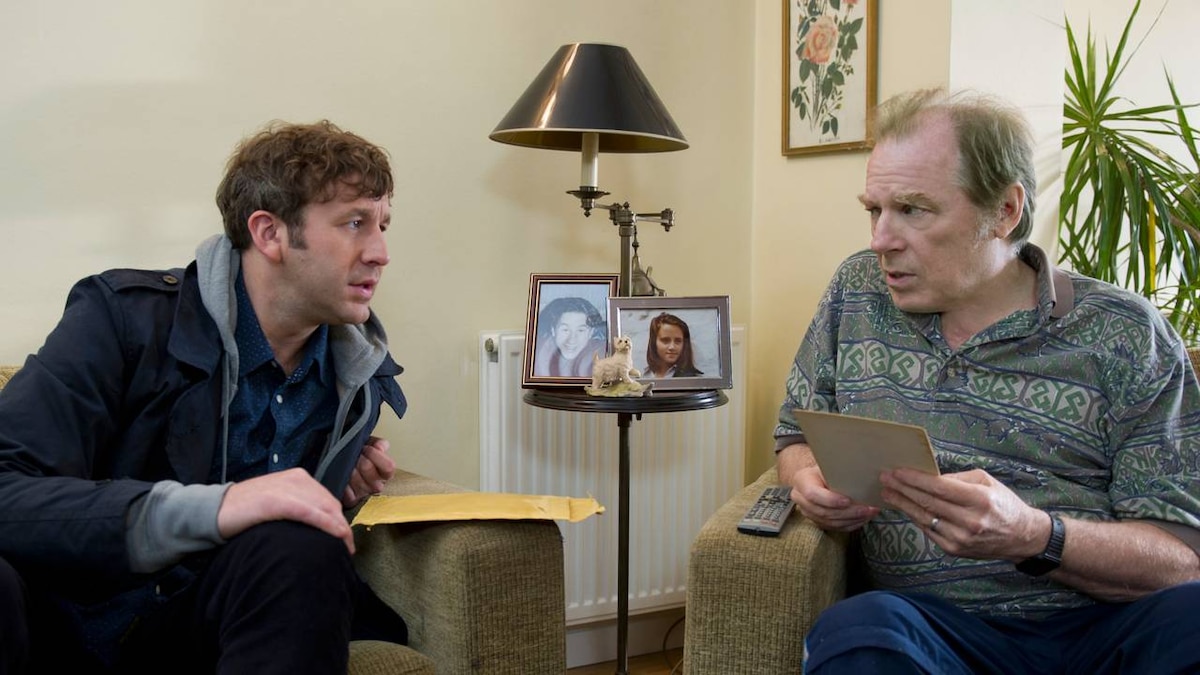 "Genealogy is like any other kind of '-ology,' best left to the scientists." -Keith

Tom Chadwick visits his father to show him the picture of his great-grandfather, Harry. Since his own father was Caucasian, Keith does not believe that the Chinese man in the photograph is his granddad. Tom points out that some traits skip a generation but Keith is skeptical: "Blue eyes, that's one thing, but Chinese-ity?"

After examining the picture, Glenn Pfister reminds Tom that your ancestors' attributes aren't always passed on: "My great-grandfather was German but you don't see me annexing countries." Mr. Pfister realizes the inscription on the back of the photo references a character from Gilbert and Sullivan's opera The Mikado. He deduces Harry was an English person acting the role of a Japanese man. Online research tells Tom his great-grandfather died in Hove, so he and Pete set off on a road trip.

"In theatrical parlance, that's known as the tail-end." -Rex Mottram

Through the help of Harry's ancient neighbor, Tom's learns his great granddad performed at the Regent's Theatre. The friends receive a backstage tour, and Tom is thrilled to learn that Harry acted opposite Laurence Olivier, in the role of "Greek soldier." His great-grandfather was mainly a comedic actor, known for his work as the back-end of a pantomime horse. The front half was played by Harry's partner, Sid Balducci; the pair worked together for two decades. Each year, they entered a pantomime horse race until they had a falling out.

As Pete and Tom leave the theatre with his great-grandfather's horse costume, the theatre manager reveals the truth: Chadwick and Balducci didn't split up because of Sid's gas problems-Sid had an affair with Harry's wife. After her husband died, Elsie married Sid and moved away.

"We want to win. Because we are stepping... running in the footsteps... hoofsteps of a legend." -Tom

Tom decides to run the Annual Costume Horse Derby as a tribute to his great-granddad's legacy. Nigel Robson-Jones, President of the event, explains the race opened the door to other animals while there was a scarcity of horses during WWII. He drew the line at a camel, though: "The chap behind got to stand up head in the hump and I thought, that's an advantage too far."

Tom and Pete's confidence is shaken when they see a man who's alone in his giraffe costume: "Two legs! A biped versus four-peds!" The giraffe and a bipedal panda leave Tom and Pete's horse in the dust. They struggle to finish the race.

"You go for the leg, you get the free bone." -Tracey

Set-up by Pete, Tom dines with a woman who confesses her love of bones. She seeks them out from the countryside, roadkill ("free bones") and chicken legs. After she asks Tom to pour salt into her clavicle, he's unsure if he's ready to date.

"Died so young with a broken heart and lungs full of the flatulence of his betrayer." -Tom

Tom visits his great-grandfather's tombstone, which is engraved with a horse's rear end. While paying his respects, he reveals why he feels so connected to his great-grandfather -- he too was cheated on. He finds the graves of Harry's parents, Rebecca and Charles, and wonders what he'll uncover about them. As he departs the cemetery, Tom tells Harry to rest "with his tail held high."