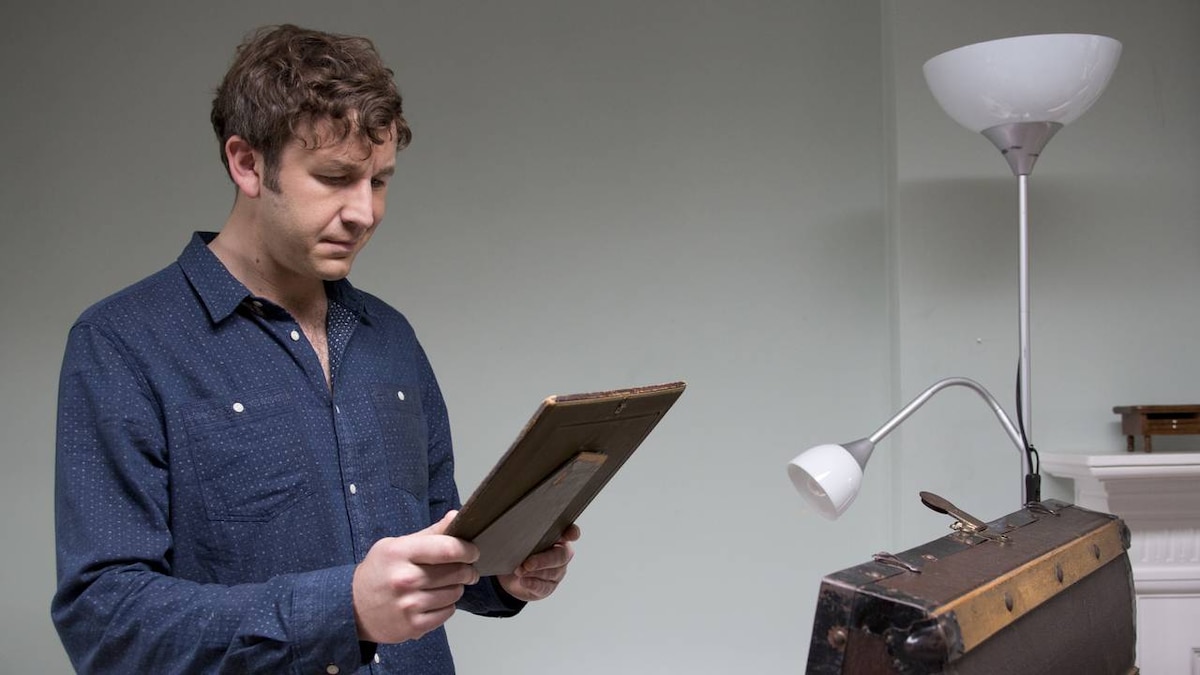 "I had an interview the other day for something kind of in my area -- risk assessment but for a new bouncy castle company." -Tom

Siblings Tom and Bea Chadwick drive to Sunday Roast at their father's home in London. Bea asks Tom if he's met anyone new since his breakup 6 months ago. He's single because "a woman would just get in the way of my wallowing." Bea asks Tom to check on Monk, and Tom adjusts the car-seat straps for a monkey puppet.

Tom's parents divorced when he was nine, "which was an adventure." He moved with his mom to Ireland while Bea stayed with their father. Nearly a decade later, Tom returned and worked at the Central London Accident Investigation Management (CLAIM) until he was recently made redundant.

Tom's father Keith Chadwick took early retirement so he could "invent something that would change the world." He shows off a prototype that can heat aor cool your shoe depending on your foot's temperature. He's still working out the bugs.

"I know a man who enjoys his bits and bobs." -Tom

Keith informs his children that their recently deceased Great Aunt Victoria bequeathed something to each of them. Bea receives a pile of clothes, some of them stained: "I don't think that's coffee!" Tom inherits a giant chest of knickknacks. Inside the box, he discovers an old photo of a man in full military garb. His father assumes the picture is Tom's great grandfather Harry.

Curious, Tom takes the portrait to Glenn Pfister, owner of Mr. Pfister's Bits and Bobs and amateur builder of landmarks in bottles. Pfister refers Tom to an antique photo expert, Neville St. Aubrey, who is "as mad as a box of frogs."

"I said, 'Don't you worry son, I do it all the time. And sometimes on purpose, because I enjoy the sensation.'" -Pete

Tom sets off to find Sat. Aubrey, bringing along his best mate, Pete Stupples. Since he was the sole primary school classmate not to ridicule Tom for soiling himself, Pete and Tom have had an "unbreakable bond."

Pete sheds light on Tom's breakup with Sarah: she broke him. Eager for his friend to move on, he sets him up with a woman as pretty as a junk mail model. At dinner with Ellie, Tom learns she believes dinosaurs still exist. She explains that "birds are a type of dinosaur" and pictures of the Loch Ness Monster must be real. "In the 1930s they didn't have Photoshop, they didn't even have iPads."

"Leave me like a dog to snuffle around." -Neville

In his strange house, St. Aubrey's examines the picture of Tom's great granddad. Neville can discern when and where it was taken but finds no studio listing under 'Chadwick,' so he pledges to research further. Tom is encouraged; it makes sense his ancestors were heroes. "I was the first out of our group to wear skinny jeans."

The next day, St. Aubrey shares his discoveries with Tom-the man in the photo is Prince George, the Duke of Cambridge. Unfortunately, Harry Chadwick was not royalty; he was the photographer. St. Aubrey shows Tom a picture of his great granddad -- it's a photograph of a Chinese man.