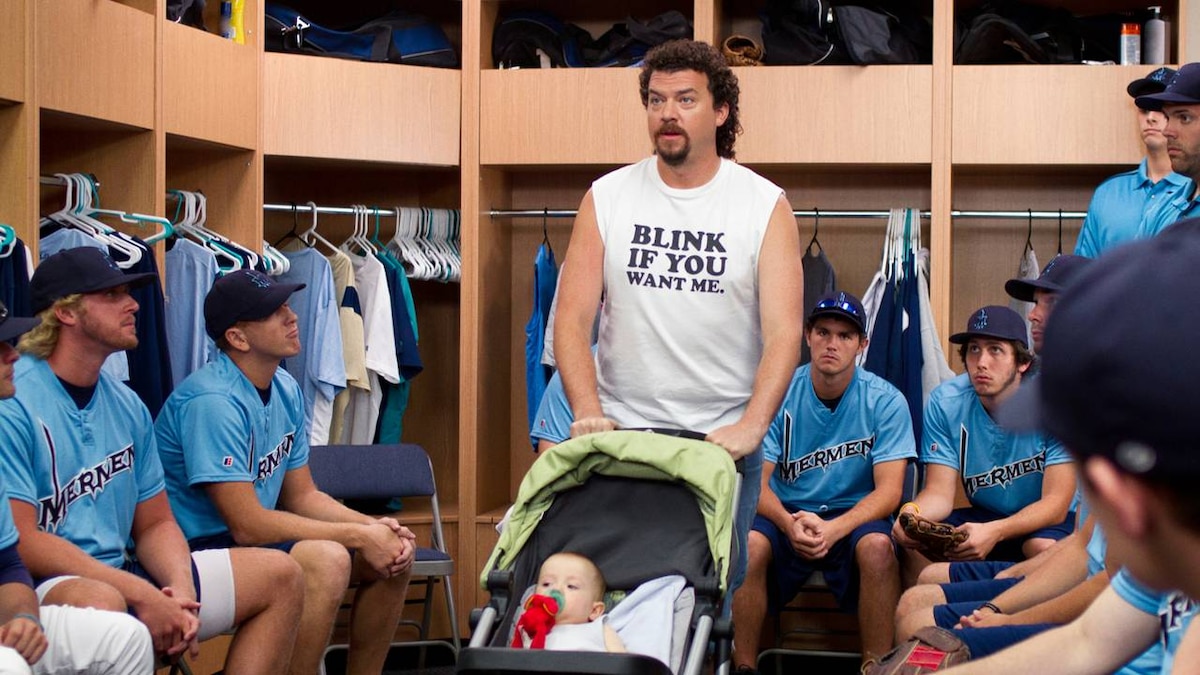 Kenny makes his return to the Mermen's locker room pushing Toby, who he's now proud of. The manager doesn't care, and tells Kenny that the only way to get back in his good graces is to show up on time and support his teammates-from the bench. Later, Kenny apologizes to Ivan for his behavior, but is rebuffed by his Russian rival. Meanwhile, Stevie is still broken up over losing Maria, who he'd seen that day selling oranges on the side of the road, or as Kenny terms it "regressed to her natural state." After a pep talk from Kenny, a freshly-wigged Stevie tries to win back his wife, but he is humiliated instead and loses Toby in the process.

It's Black Biker Week in Myrtle Beach, and Ashley Schaeffer and Reg Mackworthy show up with a full gang. Schaeffer's out for revenge for his lost Kia dealership, and Mackworthy still has a score to settle with Kenny over his lost eye. After Stevie breaks the news to Kenny that he's lost his son--and Kenny punches him in the face--they receive a call from Mackworthy, who has the child. Kenny and Stevie, armed with nunchaku and Freddy Krueger gloves respectively, confront Mackworthy's gang in a parking lot. As Reg is about to break Kenny's arm with a bat, Schaeffer uses some poorly-chosen words of encouragement, shouting at the former catcher, "Don't disobey me, I'm your master." The gang goes after Schaeffer instead, and Mackworthy forgives Kenny and offers him a motorcade escort to the game.

When they arrive, Ivan is getting shelled and being taunted by racist fans. The next pitcher refuses to play in front of the battery-throwing crowd, so Kenny steps up and feeds off their rage. Generating power from his son, Ivan's failure, and Shane's memory, Kenny strikes out the final batter. While the black bikers fight with the crowd, Maria arrives and takes Stevie back into her arms.

Later, Kenny boogieboards and sees April waiting for him on the shore. She apologizes for abandoning the baby with him, but he doesn't forgive her. He gives her the baby and a few words of advice--Gerber brand baby food, not "bobo generic sh**"--and she leaves. Kenny pretends not to care.

Season Three Premiere. Kenny enjoys a new lease on his baseball career as the closer for the minor-league Myrtle Beach Mermen.

Kenny heads north in search of April, and attempts to liberate Stevie from the perverse clutches of Ashley Schaeffer (Will Ferrell).

Kenny blames baby Toby for his recent troubles, and imposes himself on Shane's straight-laced family.

Kenny tries to win back control of his team with a 4th of July bash; Kenny has some unannounced visitors.

Kenny tries to win over Coach Banks and get back in the rotation but many obstacles threaten to detour his pursuit of redemption.

Season Three Finale. As Kenny adjusts to the new realities of his life, a twist of fate alters his future with the Mermen.