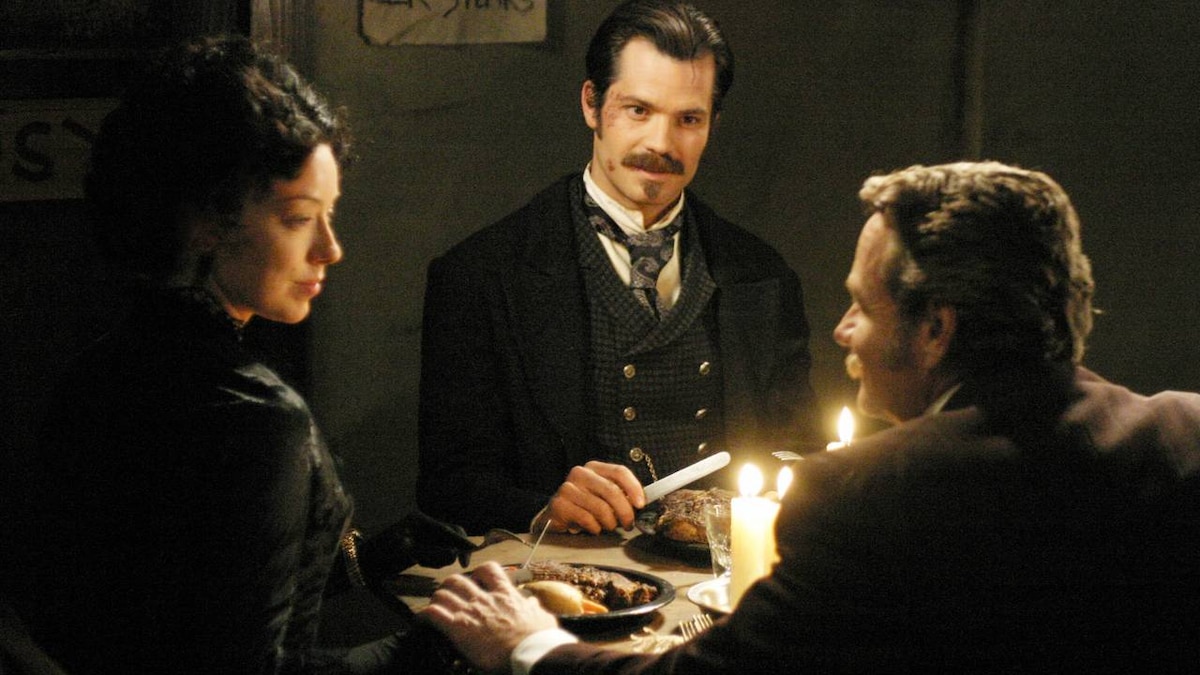 Jewel's Boot Is Made for Walking

As day breaks over camp, Trixie stands at the window reporting Deadwood's activities to Al, who is in bed describing the Chicago murder that led to the warrant for his arrest. Complaining about the treachery of the magistrate, he moans that he's "never going to be able to f*cking operate in peace."

One of the residents observed by Trixie is Jewel, who struggles through town on her bad leg all the way to Doc Cochran's. She has a book that describes leg braces, and she is hoping that the Doc can fabricate one for her, so her leg dragging won't continue to irritate Swearengen. But Cochran tells her that the devices won't work for her.

In Farnum's dining room, Joanie and Charlie Utter share breakfast, as do Alma Garret, Sophie and Ellsworth. The old prospector tells Alma that his work on her claim is just about done, and that it is time to sink some shafts. Alma affectionately entreats him to remain in her employ. Their discussion is interrupted when a surprise guest arrives: Alma's father, Otis Russell.

Silas Adams, the magistrate's bagman-and Swearengen's latest protege-visits Al at the Gem. What message does Swearengen want to send to the magistrate? "Tell him no more envelopes, and go f*ck himself," Al says. Adams, who understands that Swearengen is not just posturing, tells him that people in Yankton believe he is the person to deal with in Deadwood. And, he adds, "It's just the magistrate that can earn on that warrant. No one else knows about it."

The two agree on a deal to get rid of the magistrate, after haggling over the price-with Al offering $2,000, and Silas thinking $20,000. "Take the two," Al says. "You gotta believe you're opening the door to your future. And making hundreds of thousands back and forth between here and Yankton."

Visiting Alma's room, her father jokes that he always knew she'd end up in a boarding house with a farmer's child and a bonanza of gold. After examining a nugget, he tells his daughter that there has been talk that she had something to do with her husband's death. "You have to admit, it's a suspicious sequence," he says.

Charlie Utter, who says he's not making any friends in town in his new role as fire commissioner, threatens to fine Tom Nuttall if he doesn't make his saloon safer. Nuttall is nearly inconsolable. "Jesus Christ almighty, that's the kind of sh*t that ran me out of Wilkes Barre," he says. Con Stapleton, who is on hand, tells him that this is where the camp is headed, and offers a novel solution. Have Al Swearengen appoint him Sheriff, and he'll use his influence to help Nuttall.

The junkie Leon returns to Cy Tolliver's employ, but in a new capacity. His new job, Tolliver says, is "expressing your f*cking opinion." Leon is to stir outrage over Swearengen handing Jimmy Irons over to Wu. Nuttall convinces Al to make Stapleton Sheriff. "Truth is," he implores, "I feel like the camp's getting away from me." Al reluctantly agrees, but warns him not to expect Stapleton's loyalty. "Press your luck no further," he says, allowing the new officer to be sworn in at the Gem. "Don't expect me to attend."

At the hardware store, Trixie visits Sol. "Anyways, would you like a free f*ck?" she asks after a bit of small talk. Star is taken aback, but he locks up the store and they are soon going at it-at least until Bullock walks in and catches them in fligrante.

Shuffling out, Bullock wanders to the Gem, where he learns of Stapleton's swearing in. He confronts Al about the appointment, and Swearengen supports Bullock for the job, but the former lawman emphatically rejects the idea.

Reverend Smith is worse than ever, twitching and repeating scripture manically. Weaving with whiskey, Swearengen watches from his balcony as the Reverend delivers a sermon to an oxen. Al seems unable to stop watching Smith, and becomes emotional as the rant continues. He drinks more and more, confronting Trixie and then Sol about their tryst.

"What can any one of us really f*cking hope for," he says, clearly upset over Trixie's betrayal. "Except a moment here and there with a person who doesn't want to rob, steal or murder us." Lashing out at Trixie he tells her to get back to work: "You sleep tonight amongst your own."

Alma's father invites Bullock to dinner, and Farnum immediately recognizes Russell as a fellow swindler. Ignoring Alma, Otis discusses her future with Bullock, and Alma is quickly brought back to a world where women sit silently as men make decisions. "If we didn't hate them too much to be curious about the world," she muses to Sophie as she watches her father and Bullock smoking cigars on the street, "We'd wonder what they had to say."

Eddie returns to the Bella Union and immediately begins palming chips at the gaming tables, "for the Joanie Stubbs construction fund." Leon has loudly begun his work as anti-Swearengen agitator. Bullock tells Star about Alma's unsavory father. "Cold enough world without gettin' done against by your own," he says.

Back at the Gem, Al's day ends as it began, but Trixie has been replaced, and he is under a whiskey-induced full head of steam. Rambling about the Reverend, he launches into a profanity laced, semi-coherent history of his youth in a boy's orphanage in Chicago, all the while being serviced by his new companion. "Anyways," he slurs, pulling a slug from another bottle of whiskey. "I don't look backwards."