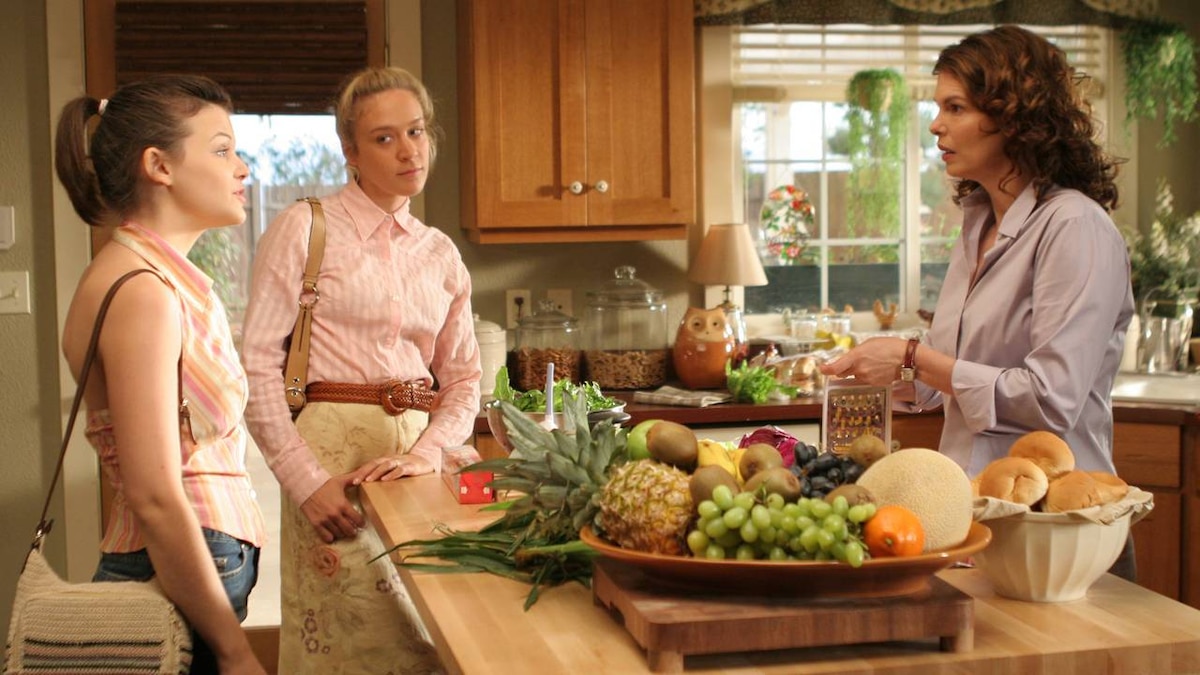 Where There's a Will

In the event of her untimely death, Barb now wants her kids raised by her sister-wives, which means all three of them must revise their wills. They agree on a simple rule: if any of them were to die along with Bill, their kids will be raised by the next youngest sister wife. Barb and Margene are touched by their newfound sense of commitment to each other, but Nicki secretly books an appointment with Bill's attorney — she wants her kids to go to her parents at Juniper Creek.

Bill is being recruited by the prestigious Salt Lake Leadership League, a country club of business leaders that rejected him nearly a decade ago. The head of recruitment once saw him speak passionately about how the Mormon Church saved him, and he never forgot it. Thrilled to be courted by the group, Bill meets resistance when he tells Don and Barb about it. They're leery of the public profile it would require.

Ernest Holloway shows up at Home Plus with a ragtag pile of papers, every UEB share he's been issued since 1962. Bill offers to take them to his lawyer to see if he can buy them — and take over his seat on the Priesthood Council.

When a photographer from the Tribune arrives for the 'Mother of the Year' photo, Barb pretends she forgot about it, but quickly assembles her kids in their dining room, away from the other houses. Nicki and her kids burst in on them anyways. "This is our neighbor," Barb explains to the photographer. "Aren't we going to be in the picture, Barbara?" Nicki's son asks. "This is just for family," the photographer explains.

Nicki isn't the only one with reservations about the new will — Margene wants her kids to go to Barb before Nicki. She quietly books her own appointment with the lawyer, but his assistant brings her Nicki's revised will instead. The cat is out of the bag. "It's the culture here," Nicki says when she's confronted. "The disrespect... the loose morals. I want my children raised in an environment where God isn't under attack... taken out of the schools." Barb reminds her that they agreed the kids would stay together, and if she and Bill and Nicki were to die, all of the kids would go to the compound â€" which she cannot accept for "any kids, certainly not mine, and mine include yours."

Since losing his virginity, Ben has been dodging Brynn's calls. He confides to Margie that he thinks they're moving too fast. "Hold back Benny," she tells him. "You're lucky; you were taught it's something sacred." She lost her virginity to the boy who lived in the apartment next door. Upset that he's not returning her messages, Brynn confronts Ben at the school's track. By the time Nicki and Margene arrive to give Ben a ride home, the two have made up — they're making out by the side of a building. "This is why mothers shouldn't work!" Nicki exclaims, laying on the horn.

"Did you say something to him about it?" Barb asks when she hears about Ben and Brynn. "I'm not sure we share the same values on these things," Nicki says, before finally admitting what she's really concerned about: she doubts Barb's commitment to the Principle, and that's how she wants her kids raised. "The reason you're able to go off and work is because you have Margene and I as backstops," she tells her. "Women are designed to tend to the chicks in the nest, while men go out early to gather worms." "That's not the world we live in," Barb responds. "That's the world we should live in," Nicki insists. "One mother can't do it alone. It really does take a village, Barb."

Speaking of villages, Rhonda and Adaleen arrive from the compound for a weeklong stay — Rhonda is representing Juniper Creek in a Drama Competition. Sarah is beside herself; she's convinced the girl stole her iPod during her last visit. Nicki isn't thrilled either. After her mother rattles off a list of Rhonda's 'special needs,' she asks her how she puts up with her. "I love her and we're all equals," Adaleen responds, before recalling a dream in which she pushed Rhonda out of a speeding car. Nicki sees her opening: she asks her mother if she'd raise her kids in the event of her death. "Certainly not," Adaleen responds, matter of fact. "Your children go to your sister-wives."

Rhonda rehearses her lines before Sarah and Heather — she's doing a Eugene O'Neill play. "He was a Catholic," Rhonda explains. "It's about a family who's miserable because God's punishing them." Satan took a hold of her character, so now she's a drug addict. Sarah read the play in school last year, she tells her, and that's not what her teacher said it was about. Rhonda shrugs. She's already planning on going to the national competition in D.C., and then she's going take a bus to New York to become a professional actress. She'll live in a dorm with lots of other girls, so she'll be protected from sin. "What about school?" Heather asks. Rhonda hasn't been in school since she became pre-maritally placed with the Prophet, she explains, beaming as she tells a wide-eyed Heather that she'll be married to the septuagenarian on her next birthday.

Bill is still contemplating joining the Leadership League, but in the wake of the 'Mother of the Year' photo shoot, Barb has reservations. It feels like living a lie, she tells him, and it puts added pressure on her and Margie and Nicki. "What about Mother of the Year?" Bill asks her. "One night as Cinderella at the Governor's mansion, and then it's nothing," is her answer.

Roman and Alby have been working on their own clandestine photo shoot — they have pictures of Ernest Holloway exchanging documents with Bill at Home Plus. It doesn't take long for them to take action against their turncoat — surprising him with a beating, a threat to his life and a promise to "re-assign" his wives.

Now that her mother has made it clear she won't take her kids, Nicki approaches Margene. "You and I have always kind of clicked," she says. "I want you to take my kids." Racked with guilt, Margie comes clean about changing her own will. "I just feel that you're not very warm," she tells her.

Stuart, the recruitment director from the Leadership League, is pushing hard for Bill to join. He tells him he's the "quintessential embodiment of the American dream," proof that if you work hard, enormous opportunities are available "no matter where you're from or who your parents are."

Nicki also has reservations about him joining — she accuses of him of putting his own desires before the welfare of his family. If he joins, she tells him, he's going to have to hide, and hiding makes him half a man. "You're hyper-sensitive," he fires back. "Being second wife is what you're upset about. It clouds your vision. And frankly, it hurts me."

Bill's vision appears to be a little cloudy as well — he leaves his wives three wills out on his desk at Home Plus, which allows nosy Wendy to get a look at them when she drops off some papers. Bill catches her, but she makes no apologies; she quickly leaves to trace a family tree from the names she gleaned — drawing a line straight to Roman Grant.

Disturbed by what Rhonda told her, Heather tells Sarah they should do something to help her, like put in touch with Help the Child Brides. "Maybe she has an opinion," Sarah says defensively. "She's a real person." "Just because you're used to it, doesn't make it any less shocking," Heather responds. Sarah admits that it's horrible, but getting involved will put her family at risk, and she's not going to do that. She takes Heather's idea seriously, though, and goes searching for Rhonda at the University. The drama judge tells her that she was cut in the first round.

In the wake of Wendy's discovery, Bill picks up a call from Stuart from the Leadership League. His application should be arriving, though it's just a technicality. Incidentally, Stuart saw a documentary on TV about a polygamy compound. "They called it 'American Taliban.' Women as prisoners. Men as tyrants. Did you know people like that?" Bill pauses for a moment. "No," he answers, his voice getting quieter. "I didn't." "Do you still have family back there?" "Yes, I do."

No longer able to turn to his wives, Bill consults Don with the questions that are weighing on him. If he and Barb and Nicki were to die, he wants to know, would Don and Peg and the wives raise his kids in the Principle? "We'd be honored," Don says, giving him a big hug. Bill confides in him that's he's upset his wives don't see what the Leadership League could mean to them. "Sometimes you see those politicians who don't run for president to protect their pill-popping wives or their alcoholic children, and you just know there's a hole inside of them 'til their dying day, wondering just what might've been," says Bill. "True," Don responds, "but we've chosen a life that requires sacrifice. You have to decide if that sacrifice is worth it."

When a governor's aide arrives to talk to Barb about the 'Mother of the Year' award, she's surprised to learn that her cancer "sealed the deal." The First Lady wanted to shine a light on survivors this year, and she's especially lucky that hers metastasized. The aide asks if she'll be comfortable in the public eye, making speeches and appearances, attending overnight events. Barb doesn't have a response.

She does have an answer for Nicki, though. She can't promise her that she'd live the Principle if Bill died. "But I love you and I love those two little boys like they were my very own, and I would certainly raise them to respect it and value those who struggle to make it work." And it looks like there will be one more for all of them to raise: Margene is pregnant.

Under cover of darkness, Bill helps a bandaged Ernest Holloway and his wives board a bus to Tucson, where they plan to start a new life. "I'm finally getting out," Ernest says with great relief, before turning to issue Bill one last warning. "When Roman finds out you've taken my seat on his council, you watch out for yourself."

Bill calls Stuart at the Leadership League, and declines his invitation for membership.