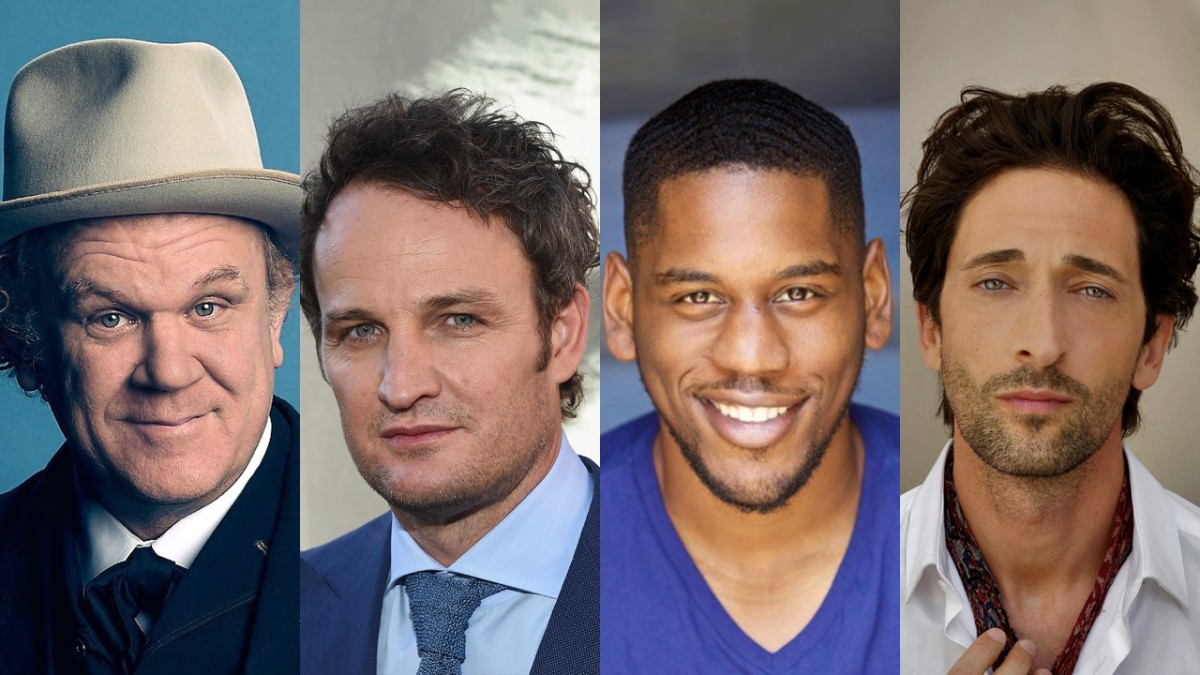 Jerry Buss (John C. Reilly)
A self-made millionaire whose success has only amplified his proclivity for risk. Buss redefines American sports, celebrity, and wealth by transforming the Lakers into a dynasty, but his house of cards threatens to collapse on him — and the people he loves most.

Magic Johnson (Quincy Isaiah)
As gifted in the game as he is magnetic in his life, his fast-paced, captivating style of play revolutionizes the sport of basketball even as his style of celebrity transforms the social fabric of the culture.

Jerry West (Jason Clarke)
The cantankerous tortured genius of basketball, Jerry West ought to be the perfect man to build the Lakers into a dynasty — if only he can get past his own worst enemy: Jerry West.

Claire Rothman (Gaby Hoffmann)
The general manager of the Forum, the first and only female manager of any major market sports arena, Claire uses her searing intelligence and emotional endurance to thrive in the misogynistic world of professional sports.

Jack McKinney (Tracy Letts)‌
The unsung hero behind Showtime basketball, Jack McKinney is the original architect of the Lakers’ fast paced running game. Despite having no NBA head coaching experience, McKinney must find a way to translate his groundbreaking vision and unify his new team.

Paul Westhead (Jason Segel)
Paul Westhead, a Shakespeare professor, leaves grading papers behind to be assistant coach of the Lakers. In Los Angeles, Westhead steps into a drama straight off the Bard’s page (of which he is fond of quoting).

Cranny McKinney (Julianne Nicholson)‌
A coach’s wife who is in many ways a coach herself, Cranny McKinney is frank, funny, and tenacious. No stranger to uprooting her family, she does it one last time – leading the family to LA for what could be the realization of their lifelong dream. It proves to be just that; but as the Lakers rocket to unprecedented success, until tragedy derails everything.

Jeanie Buss (Hadley Robinson)
The daughter of Lakers owner Jerry Buss, Jeanie is ambitious, smart, and eager to prove herself as competent as the men around her as she weighs the competing influences of her role models to forge her own identity as a businesswoman.

Kareem Abdul-Jabbar (Dr. Solomon Hughes)
His intelligence, talent, and political activism have made him a living legend, but his introverted nature leads him to be misunderstood by not only the public, but his own teammates. Deeply sensitive after a lifetime of betrayals, the arrival of rookie Magic Johnson sparks his gradual journey to open up to those around him — a quest that re-inspires his love of the game.

Bill Sharman (Brett Cullen)
Bill Sharman is the ultimate renaissance man: a collegiate basketball champion and four-time NBA champion, with a short stint as a Major League Baseball player, a career as one of the most influential NBA coaches of all time, and a third career as legendary GM of the Lakers. He even once punched a shark in the face, while on vacation in Acapulco. But as he begins to feel his age and lose his voice, he must consider his future – and the future of the team he loves.

Frank Marian (Stephen Adly Guirgis)
Real estate entrepreneur Frank Mariani spent 20 years building a Los Angeles empire with his business partner and best friend Jerry Buss. But when they bet it all on the Lakers, a marquee franchise in a floundering league, it will take nerves of steel, their best poker faces, and more than a few antiacids to succeed.

Lon Rosen (Joey Brooks)
Before Lon Rosen was Magic Johnson’s agent and business partner, he paid his dues working alongside Jeanie Buss and Linda Rambis as the youngest employees of the Fabulous Forum.

Cheryl Pistono (Sarah Ramos)
In contrast to her boyfriend Kareem Abdul-Jabbar’s public persona, Cheryl Pistono is warm and outgoing. She uses her emotional intelligence to encourage Kareem to be himself, and together they weather the highs and lows of a life in basketball.

Chick Hearn (Spencer Garrett)
Legendary Lakers announcer Chick Hearn coined terms essential to basketball’s lexicon —including slam dunk, airball, and no-look pass. His colorful language and “world’s eye view” were so essential to fans that he became one of the few personalities to lead simultaneous radio and TV broadcasts.

Linda Zafrani (Molly Gordon)
Linda Zafrani’s intelligence and savvy have earned her a position in the Forum Office, but the arrival of new ownership — Jerry Buss and his ambitious daughter Jeanie — requires her to navigate a complicated web of personal and professional relationships.

Michael Cooper (Delante Desouza)
Despite having been drafted the season before, a devastating knee injury rendered 24-year-old Michael Cooper a “rookie” alongside Magic Johnson. Anxious and unsure of himself, Cooper is nonetheless determined to prove his worth to the team.

Jamaal Wilkes (Jimel Atkins)‌
The son of a Baptist preacher who converted to Islam, Jamaal Wilkes is thoughtful, good-natured, and soft-spoken. Which means he’s often overshadowed by the big personalities (and bigger egos) of his teammates. But he doesn’t need headlines or hype. On the court, he’s a silent killer; with game smooth enough to earn his nickname: Silk.

Brad Holland (Jon Young)
The only Laker wholesome enough to be nicknamed "Potsie."

Earvin Johnson Sr. (Rob Morgan)
For decades, Earvin Johnson Sr. worked as both a garbage man and on an automobile assembly line to provide a better life for his children. When his son Earvin “Magic” Johnson is presented with an expensive NBA contract, the differences in how Earvin Sr. and his namesake handle privilege, opportunity, and attention are made obvious.

Jessie Buss (Sally Field)
As a young single mother, Jessie Buss instilled in her son Jerry a love of math, money, and good times. Decades later, her son is a successful businessman who turns to her as a trusted advisor and bookkeeper.

Donald Sterling (Kirk Bovill)
Donald Sterling was already notorious for his questionable hairstyle and stingy management of the Clippers before the infamous tape of a sexist, racist rant went public. Reminiscent of another famous ‘80s Donald, Sterling pursues the trappings of fame but lacks tact, empathy, and grace.

Red Auerbach (Michael Chiklis)
As the coach of the Celtics, Red Auerbach won nine NBA championships. As general manager, he won seven more. When the Lakers’ rise threatens his Boston dynasty, Auerbach proves himself to be the basketball genius and cut-throat competitor of every Laker fan’s nightmares.

Paula Abdul (Carina Conti)
Before she was a decade-defining pop star, Paula Abdul was just a high school student from the San Fernando Valley, moonlighting as the innovative choreographer for the Laker Girls.

Spencer Haywood (Wood Harris)
In 1970, Spencer Haywood took the NBA to the Supreme Court, winning the right to join the league before graduating college, therefore paving the way for future greats like Lebron James and Kobe Bryant. But the groundbreaking court case also won him a label: troublemaker. Haywood’s willingness to fight for his rights stymied the next 9 years of his career. Joining the Lakers roster reignites his hope for a championship win – but, first, he’ll have to face his own demons.

Christine Johnson (LisaGay Hamilton)‌
Like her son, Christine Johnson is a natural leader in her community; able to command a room with charisma and savvy. As Magic’s fame and wealth grow, she tries to keep his feet on the ground.

David Stern (Andy Hirsch)
As commissioner of the NBA for 30 years, David Stern’s groundbreaking marketing transformed the NBA and led it to unprecedented financial success. But in 1979, he was the organization’s legal counsel, determined to use the rivalry between Magic Johnson and Larry Bird to reinvigorate the league – and, hopefully, save it from financial ruin.

Chris Riley (Gillian Jacobs)
Her husband Pat might be the one wearing the whistle, but Chris Riley is the one with a plan. Therapist by trade, Chris Riley uses her emotional expertise and strategic genius to shape the Lakers into champions.

Karen West (Lola Kirke)
She might be married to one of basketball’s biggest legends, but Karen West sees the real Jerry West – and loves him for who he is, not his many accolades.

Larry Bird (Sean Patrick Small)
A basketball star who hates the spotlight; preferring instead: Budweiser, ratty jeans, and brutally, ruthlessly destroying his opponents on the court. He and Magic Johnson, who have been pitted against one another since their legendary NCAA championship duel, continue their rivalry for the next decade.